Bishop Athanasius Schneider on his book, "Dominus Est" and the Church in Kazakhstan 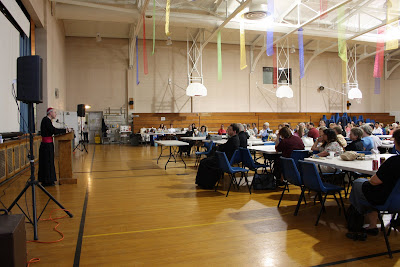 EDIT 7-28-2008: More links have been added at the bottom of the page, including links to extensive photopost coverage from two parishes where Bishop Schneider spent time during his US visit.

His Excellency, Athanasius Schneider, ORC of Karaganda, Kazakhstan held two talks today at Assumption Grotto. There were about 120 people there on a quick count, which is good considering the typical summer drop in attendance with vacations, and high gas prices (we are a commuter parish with some people driving long distances for the experience).

Before I forget, I just want to remind you that Bishop Schneider will be interviewed on Al Kresta's show Monday which airs from 4-6pm EST. There is a "listen live" button so it can be picked up internationally. I'm not sure what time he goes on, but seems to me that it could be 4:30. If you can't listen to it, just pick it up the next day at Ave Maria Radio by clicking on the archives.

FIRST CONFERENCE: Dominus Est
The Bishop's book, Dominus Est, was published by the Vatican's own library in Italian. He wrote an article about the book which appeared in the Vatican newspaper, L'Osservatore Romano, under the title: Historical-Liturgical Notes on the Rite of the Eucharist by Bishop Athanasius Schneider.

I was also just captivated by what he was saying and didn't want to get distracted with writing. The whole history of how Communion was received from the first century on was fascinating. He spoke about various ways Our Lord was received, the conditions for receiving, the postures, and the actions following reception. He had no notes in front of him and it flowed well, though difficult at times to hear.

I am hearing-impaired and struggled somewhat at times to hear him fully during his talk on Dominus Est, so I am not able to offer many notes. If anyone has specifics they want to recall from either conference, feel free to share them in the combox. Please don't make use of "anonymous", but pick a pseudoname instead if you don't want to use your real name.


SECOND CONFERENCE: Catholicism in Kazakhstan
We learned about the history of catholicism in Kazakshtan under the former Soviet Union. I knew things were oppressive, but had no idea. Masses were held secretly in people's homes. Even burial was difficult. The priests were all imprisoned for a long time and the people had no sacraments. Can you imagine? It was so humbling to watch what fellow Catholics went through and turned my thoughts to places like China where such persecution plays itself out all over again. What struck me most was the fervor and resolve of the people to not lose their faith.

The talks were recorded and I'm waiting on word as to whether those will be made available.


NEWMAN HOUSE PRESS: Status of Dominus Est in English
We will get to read his notes when the book is released in English. I have not yet gotten an estimated date. The publisher, Newman House Press. told me that it is about 2/3's translated. Newman House was looking for some donations for the initial publication which is the most costly part of the process. Here is their contact info if you want to ask how you can help get Dominus Est published.


AN UNEXPECTED EXAMINATION OF CONSCIENCE
Was it just me, or did the Bishop's talks prompt an examination of conscience on reverence and ingratitude? I think if confessions had been held after these two talks the lines would have been long. It was in no way humiliating, but very, very humbling. It wasn't condescending, but thought provoking. He gently laid out some history, then made it abundantly clear in several ways, that the Consecrated Host IS the Second Person of the Trinity, Our Lord Jesus Christ, not some piece of bread. It was thought provoking, leading us to ponder our behavior in Church when we are before the Blessed Sacrament, or receiving Communion. I was also impressed when he spoke about his responsibility as bishop to teach the faithful about the Real Presence.

Listening to him, I felt as if I was hearing a bishop's bishop - one whose teachings on this subject will be studied by other bishops. This man, who is a patristics scholar, packs a lot of facts and references into his talks. I've never heard anyone talk about the history of how Communion has been received through the centuries than what Bishop Schneider offered. Dominus Est will probably be worth it's weight in gold for the footnotes and references, as well.

Below are some pics from the second talk in which His Excellecy shared a video with some history on the plight of Catholics in Kazakhstan. 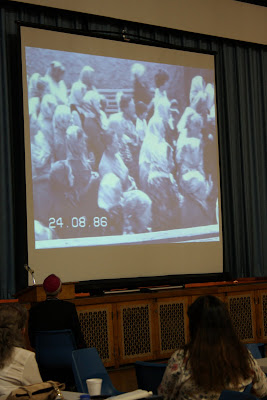 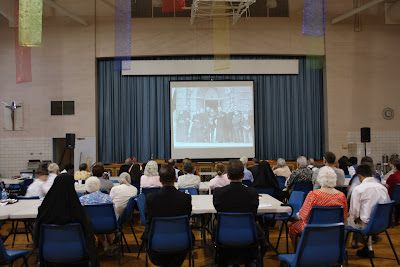 THE BISHOP'S RING: IT'S THE MIRACULOUS MEDAL
His Excellency permitted me to take one final photograph - of his bishop's ring. I wish the details were clearer, but it is unmistakeably the Miraculous Medal. He humbly permitted people to kiss his ring, which caught me off guard because I have seen some bishops gently pull their hand back. Because of this, I never attempted to kiss the ring of a bishop.

Some feel it is more humble to not let people kiss the ring, but I think the opposite is true. I did not see it prideful on his part at all, but more of an act of humility. He generously offered blessings upon people as they took his hand. One of the sisters observed that by having the Miraculous Medal as a ring, the people are kissing an image of the Blessed Virgin Mary, as well as the ring of an apostolic successor. 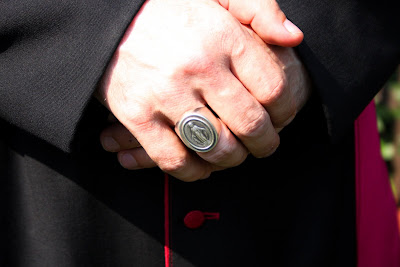 Well, that's all I have for now. I am hopeful we will see His Excellency in Detroit again in a year or so. I'll keep my ear to the wire.

MORE POSTS ON BISHOP SCHNEIDER IN METRO DETROIT
There is still time to hear the excellent homily given by Bp Schneider during the EWTN Mass on July 22. It is only up for 14 days from the time of posting so go to my first link below for details on how to find it and download it, even if you can't listen to it right away.