Q & A: Can unborn, unbaptized babies have Catholic funeral & burial? 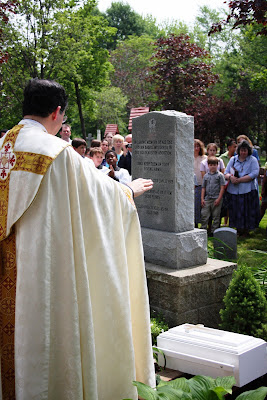 I have seen a various forms of the same question crop up in the comboxes of some blogposts on the recent Mass & burial with aborted babies at Assumption Grotto.

First, I am most grateful to all bloggers who responded to my request to give it the publicity it deserved. Perhaps this was my error to report that it was a Mass for the babies. This will be explained below...

I thought the question was a good one to ponder, given canon law. At the blog of Fr. Tim Finigan - a pro-life champion in the UK - a commenter by the name of Tomas, asks in a post Father made about my photostory:

Since I had seen this question before and was unsure how to respond myself, and with Fr. Perrone gone on vacation, I put the question to my parish priest who responded, as follows (emphasis mine, and comments in brackets):

The Mass intention on that Friday was for atonement for sins of abortion, not the souls of the unborn. However, since they were human beings with an eternal soul, we perform the corporal act of mercy of burying the dead. The Mass offered on that Friday was not a funeral Mass—it did not use the funeral prayers or rites in any way.

Hopefully, this clarifies not only the question, but what actually took place at Assumption Grotto on June 27th, 2008.