A Marriage at Assumption Grotto 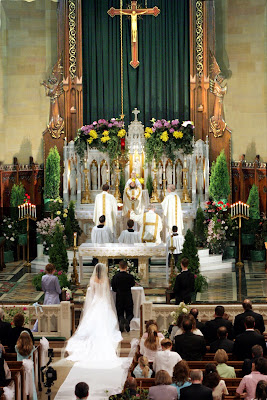 Molly Murphy and Jason Kucel - May 26, 2007
I've long wanted to capture more of sacramental life at Assumption Grotto, but just have not had not gotten around to it. The very sacraments I've participated in and witnessed, are so different from what I grew up with in the 70's and 80's. I feel it is well worth sharing. I never cease to be surpised with ordinary life at this great parish. I've experienced many weddings at Catholic parishes in my lifetime. However, I have NEVER been to a wholly Catholic wedding until just over a week ago.
A member of the Assumption Grotto Choir - Jason, who has also been active in the music program at Grotto in a variety of other ways, was married on Memorial Day weekend. The choir sang, so I was there singing, as well as taking photos for Fr. Euteneuer's visit. I decided to take a few wedding shots from the balcony. This photo is still undergoing some editing and the camera in the foreground will disappear eventually. Jason and Molly gave their permission for me to post their photo, to use their names, and to use the sermon provided by Fr. Perrone.
In the photo above, the couple gazes upon the Body of Christ just moments after they were united in sacramental marriage. May they always bring themselves back before the Lord with thanksgiving for the many blessings they will receive in their marriage. And, may they always bring themselves before Him, together, with their trials and difficulties. Spending time in adoration rains down graces to embrace and endure all that God wills for them to experience. It leads a humble human to meditate on sacrifice - something that is very unpopular to even mention today, yet so necessary for a successful marriage.
Below is a solid Catholic wedding sermon. There is a good deal of catechesis involved. The sermon is something all married couples should ponder, as well as those who will some day enter marriage. There are some things for all of us to reflect on, as well. The emphases in bold are mine...

The festivity of a church wedding has remained, even in our very non-religious time, a very desirable and impressive thing. Everybody puts forth his finest efforts to make this an impressive and memorable event. The detailed preparations made for this day are now unfolding as the day moves on.

In the midst of all those matters of dress and ceremony and protocol, there is a very brief moment of absolute significance, a moment without which all this pomp and display would be entirely vain, empty and thus, ultimately, meaningless. I speak of that great but ever so swift ‘happening’ that’s about to take place in just a moment from now: the exchange of the wedding vows. It’s all so simple and unostentatious at one might easily overlook it. It’s the moment of the “I do” when–invisibly to all of us who are intently looking-on–a transformation will take place.

We call it marriage, a uniting of two persons in an unseen but essential change, whereby they are made one thing: a married couple. ‘Looks’ can’t inform us about it. By human nature, Jason and Molly will appear to be every bit the same after as before their vows. But what a deception. An act of God almighty will be worked in their souls that will change them, and raise them to a new height of status, dignity and holiness.

If I may, I would liken this to the sacramental action of the Mass itself: bread and wine remain what they are only until the priest’s transforming words make something new out of them, so that they become the true flesh and blood of the Lord. Marriage, as you know, is one of the Sacraments. It produces a change, an interior change that’s substantial. Surely, married couples remain who they are and don’t become someone else than who they were. But between the two of them there comes to exist something that did not exist before. They become a couple.

I said that they remain, as individuals, the same after as before the vows. This is true in one sense, but not in another. What stays the same is obvious in their looks and personalities. What can and should change is the manner in which the Sacramental union affects each of the individuals. God’s grace should make them grow in such a way that the good of what they already are should increase and the bad points (dare I even mention imperfections?) about what they are should diminish. This is not a magical change of course, even though the Sacrament itself makes its change infallibly. These secondary and enhancing effects of matrimony’s grace happen only as they become willing partners with God’s grace.

Now there are three words that stood out in the readings Jason and Molly selected for the wedding Mass that could be taken as their life’s plan for making the grace of their marriage work. Here they are: virtue, order, love. Just a brief word about each one:

1. Virtue. Here’s a reminder of what you already heard from the first bible reading: “The beauty of a virtuous wife is the radiance of her home.” A happy marriage has a certain ‘radiance’ about it, a kind of pleasant light. Where does that light come from? We can say, of course, that it comes from God, or from His grace–true–but that’s too broad a cause. The radiance of a happy marriage comes from virtue. The word of God calls virtue a form of beauty. One can’t mistake it when looking upon someone whose life has been formed by virtue. They’re beautiful! And we are drawn to them because of this spiritual kind of beauty that shines through their eyes and graces their speech. With God’s grace behind them, Jason and Molly can be beautiful through the goodness of their lives.

2. The second word comes the second reading. It is Order. That word may sound a little cold, ‘order’–but it’s something that a good marriage can’t be without. Order is where there’s a structure, a hierarchy, an ordering of things in life according to their rightful place. Here’s the biblical and theological right ordering–what we would call priorities. Christ should reign supreme over all. (In effect that means ‘the Catholic faith.’ Nothing should even take precedence over it.) The husband is then head of his wife and over his household in his responsible role as leader. His wife is subordinate to him. Their children, subordinate to their parents. All other matters, interests and concerns take their place after these. This order, when it is motivated by faith and exercised in charity makes for marital happiness. Dis-order, or bad structuring, brings on martial sadness and misery. Subverting this right structure has been the ruin of many marriages and the cause of much suffering, spiritual and emotional.

3. The last word is Love–a word one can never omit when speaking about marriage. Too often, however, the singular emphasis of that word is on the couple’s mutual love. The biblical understanding is much more comprehensive than that. Love is first the love of God, of the Church, of the Catholic faith, and then love for others. The teaching of our Lord in this Gospel specifies what this loving of God means. “If you keep my commandments, you will remain in my love.” Love, according to the doctrine of Christ, then is interchangeable with obedience to the commandments. No sentimentalism here in the doctrine of Christ’s love!

So we have three concrete ways for Jason and Molly to grow in the matrimonial grace that will receive momentarily. By choosing the ways of virtue, order and charity they will show themselves very wise in the ways of God. They will also find themselves undergoing a wonderful change. By them, they will become a happy and holy married couple–and, we pray–family. May our Lord and our Blessed Mother grant them the things they have so prudently identified as the program for their married life! 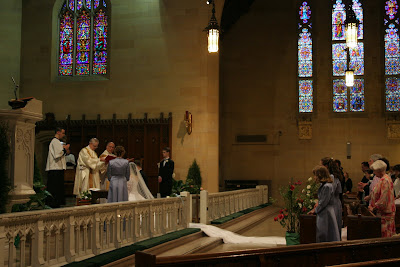