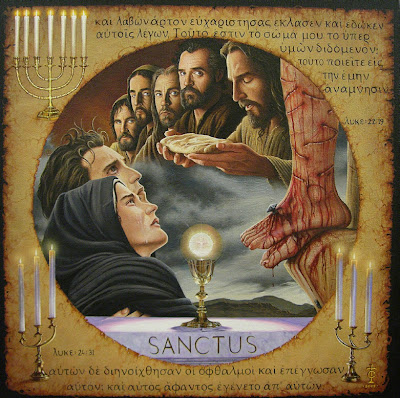 "The Perfect Sacrifice"
by artist Tommy Canning
Visit Art of Divine Mercy Online to purchase stunning Catholic artwork by this great artist I met at the 2005 Call to Holiness Conference here in metro Detroit.

Over at Catholic.com, where he is a staff apologist, Fr. Vincent Serpa, OP has given a most thought-provoking and powerful response to someone who experiences tremendous fear of using the Sacrament of Confession.

Fr. Serpa words give us all something to meditate on the next time we find ourselves less than enthusiastic to go, or don't want to take time out of our day:

You say that you hate this sacrament. What you hate is the way you feel when you receive it. You need to acknowledge that your fear is subjective. There is nothing objectively dangerous in having one’s sins forgiven.

It seems that the stating of those sins and the hearing of oneself state them to another person and the anticipation of a response could be what scares you. It would seem that somewhere in your past some experience has made you fearful of such vulnerability. You really do need to find out what it is that is really going on here.As for approaching the sacrament, you need to make a list of your sins and simply read them to the priest. But even more importantly than this, you need to focus on what the Lord was willing to endure that your sins might be forgiven.

As the result of the loss of so much blood from the scourging at the pillar, he endured a pounding headache that accompanied Him to His death. Receiving the nails into the carpal tunnels of His hands brought pain to His whole upper body. When the cross was lifted and put in place, the nails in His hands held His body up. His up-stretched arms then began to squeeze His lings and He began to gasp. So He had to push down on His crucified feet to raise His body so that He could fill His lungs with air. This caused additional pain to His feet. Such strain required additional energy and His energy was steadily decreasing from the loss of blood. Nevertheless, He maintained this agonizing routine while hanging on the cross for three hours. As He became weaker, His struggle became greater. After three hours He came to the point where He just could not raise His body one more time. Finally in that eternal moment He gave up His spirit and died, giving us life. That moment was the reason He became man. It’s eternal because it transcends time and touches every human being who has ever lived or will ever live. It’s the moment that gives us a window into what it means to be loved with a love that is infinite.

The more we reflect on this eternal moment, the more we begin to realize what it means to be loved by Him. When the priest raises his hand as he absolves us, it is really the nail-scarred hand of Jesus who is absolving us. We must never forget this. This is how to cope with your fear. As St. John says, love banishes fear.

I will remember you at 2 a.m. during my hour before the Blessed Sacrament.

If you have questions about the Catholic faith, you can always use Ask an Apologist at Catholic.com after registering.

Te Deum Laudamus! Home
Posted by Diane Korzeniewski at 7:01 AM