If you every want to get Fr. Nortz energized, just ask him a question about the effects TV, music, and other media has on our lives - spiritual and actual.

Apparently, I was the only one in the dark when I had asked how he felt about Catholics watching programs like Desperate Housewives, which treats immorality with such casualness.

Father's eyebrows went up, then he asked me a question as a wide grin encompassed his face: "I'm sorry, but did I hear you say you want ME to comment on this?". It was followed by a chuckle and I began to wonder what I had just done.

The place errupted in hysterical laughter and then I remembered.... 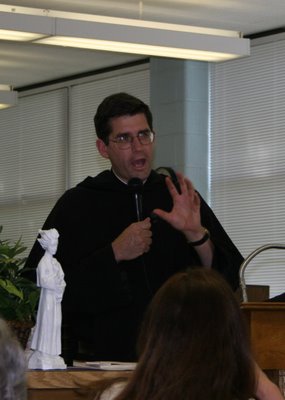 I had seen a CD at the Opus Angelorum table in the Assumption Grotto Giftshop and Cafe (click on the picture to purchase): 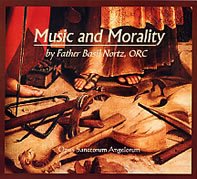 The caption for the CD:

What is wrong with Rock Music? Music can be one of the most powerful elements in disposing a person towards virtue or vice. These conferences provide clear reasons why music has long been considered a key factor in the moral formation of the young.

Well, I'm sure Father doesn't explain his feelings on Catholics watching Desperate Housewives on this CD, so I'll give you the short of it:

Father said that some would defend watching programs which contain and/or promote lifestyles which are contrary to Catholic teaching.

I'll personally add that the extra- and pre-marital sex so rampant in most TV shows, are contrary to the 10 Commandments. Then again, so many people merely treat them as the 10 Suggestions.

He went on to say that some people defend watching things which contain God-displeasing content because they often feel, that after a long day, they are entitled to some rest and relaxation. And, they feel that as long as they know that all of the affairs and sinful subplots are contrary to Catholic teaching, these people reason that it's ok to watch.

But he brings up some valid points and I'll just summarize as best I can recall in my own words. If anyone reading this was at the conference and remembers more, please add it into the comment section. You can toggle on the anonymous button if that kind of thing makes you nervous.

1) It deadens our senses to that which is sinful and develops a permissive attitude.

3) Why not spend the time engaging in something that is God-pleasing.

4) If you want to give the Angel of Darkness an avenue to mess with your better senses, this is one of them.

I'll add one and maybe he mentioned it, but it is one reason why I refuse to watch it, in addition to those above. He nailed all of the points beautifully. All of what he said, goes along with what Ken Henderson of True Knights said on EWTN last night (paraphrased): "The industry is basing entertainment on mortal sin"

5) Why give this kind of programming our support. Each person watching only drives their ratings up.

This leads me to reflect on concupiscence. Virtue or holiness does not drive us to sit and watch programming which promotes permissiveness towards the breaking of God's commandments. So what would drive us to watch these things? Is it not an attraction towards things that would be more gossip-like in nature? Is it merely self-deception to convince ourselves, it's offensive to God, but hey, I'm going to watch it anyway because this is how things are today. I'm going to suggest it is concupiscence itself which draws us to programming which contains, or is based upon immorality of the characters. What does the Catechism of the Catholic Church say (emphasis mine)?

CHAPTER TWO
"YOU SHALL LOVE YOUR NEIGHBOR AS YOURSELF"

2514 St. John distinguishes three kinds of covetousness or concupiscence: lust of the flesh, lust of the eyes, and pride of life.301 In the Catholic catechetical tradition, the ninth commandment forbids carnal concupiscence; the tenth forbids coveting another's goods.

2515 Etymologically, "concupiscence" can refer to any intense form of human desire. Christian theology has given it a particular meaning: the movement of the sensitive appetite contrary to the operation of the human reason. The apostle St. Paul identifies it with the rebellion of the "flesh" against the "spirit."302 Concupiscence stems from the disobedience of the first sin. It unsettles man's moral faculties and, without being in itself an offense, inclines man to commit sins.303

2516 Because man is a composite being, spirit and body, there already exists a certain tension in him; a certain struggle of tendencies between "spirit" and "flesh" develops. But in fact this struggle belongs to the heritage of sin. It is a consequence of sin and at the same time a confirmation of it. It is part of the daily experience of the spiritual battle:

For the Apostle it is not a matter of despising and condemning the
body which with the spiritual soul constitutes man's nature and personal
subjectivity. Rather, he is concerned with the morally good or bad works, or
better, the permanent dispositions - virtues and vices - which are the fruit of
submission (in the first case) or of resistance (in the second case) to the
saving action of the Holy Spirit. For this reason the Apostle writes: "If we
live by the Spirit, let us also walk by the Spirit."304

It is my belief that this kind of programming nourishes concupiscence, making it more likely for us to dismiss the high level of sinfulness inherent in extra-marital affairs, for example.

Support the work these priests do by buying their CD's. They've been great for driving if you have a CD player in the car. They are not only educational, with lots of references to Scripture, catechism, the saints and doctors of the Church, and more - but they are spiritually moving. Lock yourself away with one of these and it will be like you're on a Day of Recollection. That is where many of these talks come from as most are recorded. I'm going to get this one and listen to it. I'll do a review on it at a later date, after I'm done with the talk Fr. William Wagner, ORC gives in a CD on the same webpage I provided earlier: "The Mystery of the Immaculate Heart"

I think I can squeeze one more post on this tomorrow, God willing. I still have photos from the 2nd Benediction of the day, in the Church following the conference. I took them from a different angle this time.

I rarely take notes because as I'm writing one thing down, I totally miss something else. I like to simply sit and listen. However, I don't have the memory I once did. Therefore, if anyone reading this was at the conference, and took notes and would like to share a few, please give me a copy next time you see me, or if you can, email me a few of them. It might jar my memory on some of what I had hoped to share.
Posted by Diane Korzeniewski at 5:07 AM