These photos are from the pastor's 7:30am Saturday morning Mass. The April 1, 2006, Spirit of the Liturgy Seminar/Retreat was due to start at 8:30 and Fr. Joseph Fessio, who led this great seminar, joined Fr. Eduard Perrone. I had a feeling he would take in this early morning Mass ahead of the seminar so I took my camera with me, set it up on the tripod, and hooked up my cable so I wouldn't need to press the button and move around too much. One such risk is that you don't always get to look in to the lens right before the shot. I framed the priests sitting in their chairs and when I snapped this one, Fr. Fessio had risen to hear the Gospel and I nearly cut his head off. It's a nice shot otherwise. 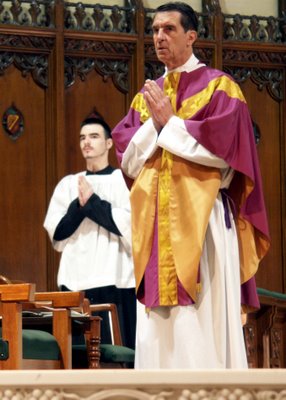 This is a classic shot of Fr. Perrone during his morning homily. On Sundays and solemnities he uses a more formal type-written homily that he pens ahead of time. But, on weekdays and Saturday mornings, he just speaks from the heart, reflecting on the Gospel and readings, with his eyes often closed. It is very meditative to sit and listen and I miss those early morning Masses at Grotto. I had to shift to an earlier daily Mass yet at another parish so I could start work by 7:30. The look of peace and serenity says it all and the stained glass makes for a nice backdrop. It was the one time I left my pew. 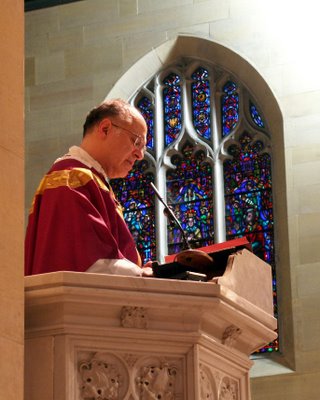 Our early morning Masses always have at least one altar boy, but most often two. The one on the right restores a sense of dignity and grace to the position of "Master of Ceremonies". Each morning he comes out, tells us simply what feast day it is and reads something very short about the feast, then announces which of the four Eucharistic Prayers (emphasis added) is to be used (because it is in Latin and people follow either in a missal or in the booklets we have at Assumption Grotto for all Latin Masses). Then, he announces which mass chant will be used from the Kyriale. We have two men who usually take the lead on chant in each Mass, or sometimes they'll do the 7:30 together. When they are absent, Fr. Perrone leads the Mass chants in his mass. We use a variety of mass chants (a little less than 20 in count, if I recall) and all morning Masses are completely sung about 95% of the time. Both the 7:30am and the 8:30am Masses are in Latin, with the 7:00pm daily Mass in English. 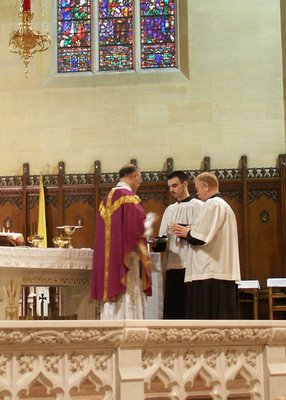 As you can see here, the Mass is being celebrated ad orientem, like all Masses at Grotto. However, unlike some of the other pictures in this thread, you see Father using the center low altar, not the fixed high altar. We use the high altar on Sundays at more solemn masses, such as the Latin Novus Ordo. 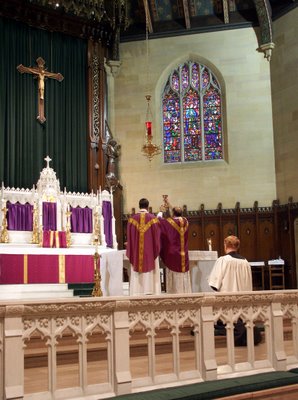 During the consecration, the altar boys always come from their places to behind the priest, facing forward with the rest of us. Bob is seen kneeling as Fr. Perrone is presenting Our Lord, "Ecce Angus Dei..." 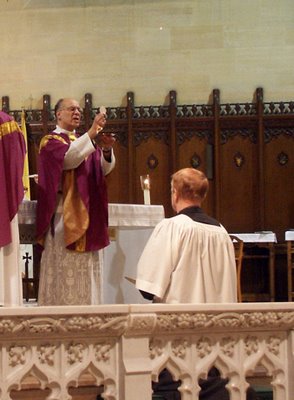 One thing that caught my attention early on was the graceful manner in which the altar boys bow throughout the liturgy at various points (exactly as Fr. McNamara describes below). It is all quite precision, yet second nature from years of repitition and adds to the solemnity of the Mass. I would later learn that the bows from the waiste and head bows seen periodically throughout the liturgy weren't my imagination. In fact, I was surprised to learn that we are all suppose to follow suit when we are vocalizing.

Fr. Edward McNamara explains in one of his answers found at Zenit.org

Several readers asked if the different bows indicated in GIRM No. 275 were for everybody or only the priest. The text states:

a. A bow of the head is made when the three Divine Persons are named together and at the names of Jesus, of the Blessed Virgin Mary, and of the Saint in whose honor Mass is being celebrated.

b. A bow of the body, that is to say a profound bow, is made to the altar; during the prayers 'Munda cor meum' (Almighty God, cleanse my heart) and 'In spiritu humilitatis' (Lord God, we ask you to receive); in the Creed at the words 'Et incarnatus est' (by the power of the Holy Spirit ... made man); in the Roman Canon at the words 'Supplices te rogamus' (Almighty God, we pray that your angel). The same kind of bow is made by the deacon when he asks for a blessing before the proclamation of the Gospel. In addition, the priest bows slightly as he speaks the words of the Lord at the consecration.

Taking a cue from several questions I remark the following.

The bows mentioned in this number are made by whoever recites the prayer to which the gesture is attached. Thus, in those prayers recited only by the priest, only he makes a bow at this moment.

In prayers said in common all bow at the indicated moments. Thus, for example, everybody should make a bow of the head during the Gloria at both mentions of the name Jesus Christ but not when the priest mentions the name during the presidential prayers.

The GIRM however is not exhaustive and it is not necessarily true that everything not specifically mandated is therefore forbidden.

There are some bows which are either not explicitly stipulated, or are stipulated only for bishops but are customarily extended to the priest.

For example, it is a common practice for servers to bow toward the priest after they bring the missal to the chair, when they bring the water and wine, and then again after the washing of the hands. While not obligatory these customs may be continued.

Likewise those Catholics who have the custom of bowing the head on hearing the name of Jesus may continue to do so even though this gesture is not mandated in the liturgy. For here we are dealing with a pious custom, not a liturgical act.

More on the seminar later, with additional pictures from the conference itself, and the Saturday vigil Mass, which ended the seminar.

Here is a PDF used for the seminar in California, which followed the one in Detroit. Stay tuned to the news event calendar at Ave Maria University to see if this seminar will be coming to a city near you, or use the email found in the PDF file to find out more.
Posted by Diane Korzeniewski at 5:56 AM