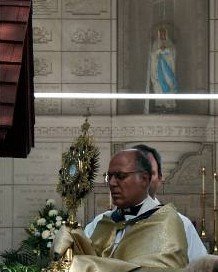 On the front page of the Assumption Grotto News, in his weekly, Pastor's Descant column, Fr. Perrone (pictured at right during an outdoor Benediction on August 15, 2005) tackled the issue of "sex for seniors" head on.

Since the parish website only carries the descant articles for a specified number of weeks and the link changes after the first week, I'm reprinting the entire article here so it is not lost to those who may look for it down the road.

Father had a really strong homily at the Saturday vigil Mass based on the 2nd reading and Gospel, both of which concern the ten commandments. It was very thought provoking. I'll be providing a link to it when available at the Grotto website. It compliments what is below, but focuses more on teens and the rest of us.

Here is the May 14, Pastor's Descant in full:

Once many years ago I gave a sermon on the sins characteristic of the various stages of a man’s life. It does seem that there are some recognizable patterns. One would not be surprised to learn that sins against chastity would tend to predominate from the time of adolescence when the urges of the flesh first manifest themselves calling upon all one’s powers of self-mastery. One would also expect that sometime later in life the ‘sins of youth’ would give way to other potential snares as both the bodily powers begin to wane and the virtues hard earned through disciplined living come to be exercised with greater facility. I am reminded here of an episode in the life of Saint Alphonsus in which he, as an aged man, was once tempted by an impure thought. Turning immediately to the Lord in prayer, he queried, “Lord! even in my old age?” There’s a touch of humor here certainly but also there’s a warning. The devil never gives up–as the Irish like to say–until one hour after you’re dead.

What occasions these remarks is a rather disturbing phenomenon which seems not to be going away. A concerned parishioner has alerted me to what may inelegantly termed ‘sex for seniors.’ Perhaps due to the aging population in our country, there’s an effort afoot to sexualize those years of life once idyllically termed ‘the golden years.’ As God has a reason for everything (even a usefulness for evils), so there’s a reason why we are permitted to live unto old age. This reason–the same reason as for God permitting aging generally–is so that when the major work of life is done and one has more time, one might more readily turn his thoughts to eternity and prepare himself for a happy death. All the wisdom and experience gained in life, both the good and the bad, can be put in useful service for this most important project of getting ready to meet the Lord in judgment. However, the pansexual preoccupation of our madly driven society (the prefix pan here means ‘all’) will not allow the aged their pious reflections. No, rather they are given the means to ensure that thinking and acting sexually (often in sinful ways) will not diminish with age.

This may be recognized by the fact that many of our retired people often are bored and do little else than watch away their time. The fact that so much of TV is of an impure sort contributes to much of the problem. Older people on TV are often portrayed as still very much interested with thoughts and activities proper to youth. Drugs are manufactured and shamelessly advertised that promise to extend the youthful vigor's of libido into old age. It is not uncommon to see immodest dress among those of venerable age. As we are all–aged and not so aged–being forced to hear foul language as acceptable interpolations in everyday speech, to hear lewd lyrics in popular songs, to view provocative dress in both women and men, to witness vulgar gestures and postures, etc., so we have come readily to include the aged in our frenzied absorption in anything of an impure nature. Why leave the old folks out of the fun?

Those of a younger age used to regard with respect those of older
age because they had attained the wisdom of years and because their advancing physical frailty called for the kind of protection accorded to infants and children. As we have become more proficient in selfishness, this deference towards older persons is passing away. If old folks can’t join in what we’re interested in doing, they’re useless baggage for society and should be put away–if not actually exterminated. I know this is shocking, but it is fast becoming the mindset of the young. We are thus paying the price of the sensualism and consumerism in which we have been schooled and applying the lessons learned to the seniors.

We should not exploit the aged medically, financially, or sexually. If only we could stop our busy lives and give older people the kind of help they really need in being concerned about the things that will matter for all eternity–the things of the faith–we would be doing them a great spiritual work of mercy. The devil has an alternative plan: to keep their souls fixed in sin until their last breath so that they will be his forever.

“From sudden and unforeseen death, deliver us, O Lord.”(Litany of Saints)

Hopefully, when we read this kind of thing we find ourselves searching inward, rather than getting irritated. It takes humility to look inward, and a good dose of pride to get irritated.

It's a good time to recall that that the Sacrament of Penance is there for all with wounded souls. Addicted? Go frequently to free yourself.

For those stuck in sinful addictions there is a Catholic resource run by Ken Henderson called True Knights - mainly aimed at helping men. Ken's story is a testimony that addictions can be overcome. Click the icon to learn more about True Knights.

Posted by Diane Korzeniewski at 9:30 PM