I'm attempting to upload more photos, hoping the ever-tempermental blogger.com server doesn't go on self-desruct again. Maybe the beauty of Grotto is just too much for it to handle!!! I am going to attempt uploading at the medium setting so if you want to get a closer view of the pic, just click on it.

These are from the outdoor Mass. It was already about 85F and in the sun, hotter yet. Fr. Perrone - the celebrant, urged people to move their chairs into the shade at any point during the Mass. This first shot was taken just as Mass began, from behind the Grotto (I was praying I would not become the center attraction by slipping off of the rocks I climbed onto). 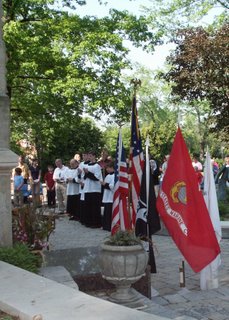 I would estimate about 200+ were in attendance. People scattered into the coolness of the trees. In contrast, the feast of the Assumption must pack in 700-800 in the evening outdoor Mass, but for not being a holy day of obligation and considering some already went to the 7:30am Mass, this was a really good turnout. 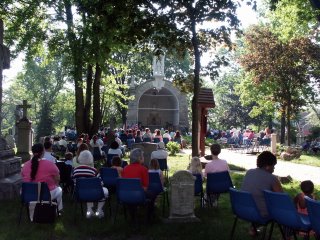 The Elevation of the Body of Christ, followed by the Blood of Christ in a wider view. What more needs to be said? 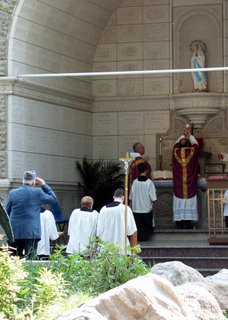 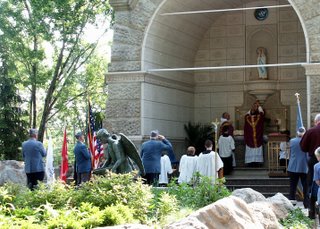 Blogger is getting uncooperative again, so I'll try more again later or tomorrow. I was also taking pictures of other things within Grotto following the 7:30am Mass. For the first time, some stained-glass window shots actually came out and I'll be showing them soon.
Posted by Diane Korzeniewski at 3:34 PM