You may notice that my posting on this blog has slowed. Here is why:

I've purchased a new domain name and I am plunging head first into full blown website development. An idea has been on my mind for many, many months and this website incorporates that idea, along with several others into what will become my life's work. 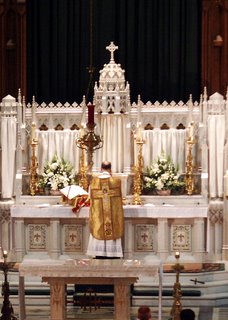 I designed the logo over the last few weeks and settled on what is above. The website will be about many things, but the name should be a clue that it will be aimed at an audience of Catholics who favor the more solemn, reverent, and traditional form of the Novus Ordo. The Latin expression, "Ad Orientem" means, "to the east" and it is often used in reference to the posture the priest uses when facing liturgical east, such as is seen in the photo to the left. I don't refer to it as "having his back to the people" because that puts a negative view on something very positive. Contrary to popular belief, this posture was not abrogated during Vatican 2.

I've never built a website before and know very little about html. I've purchased FrontPage 2003, and two books, one of which I'll recommend in a later post. This last one has been extremely helpful for someone like me with little or no experience in website building.

I won't say much about the website and will let it's full scope be comprehended when launched. This could be a few months away as I fumble through development. Of course, if I had more time I could probably launch it in a month, but I only have an hour here and there to work on it.

I made the good Lord and the Blessed Mother a few promises when asking for assistance:

MORE ON THE CHARITY ISSUE

Dissent and heresy are sinful cancers in our Church, no doubt. Cancer is not cured by poking fun at those affected, but by hitting the cancer itself with powerful treatments. Our Lord never had fun at anyone's expense, even the worst of sinners. If such a thing can be found anyplace in Sacred Scipture, please give me the passage in the comment box below. We are called to imitate Christ and AdOrientem.com will work to imitate Him in all regards.

All too often in the past year, in wanting to take the spiritual high road, I find people thinking that I am not equally disapproving of what these wayward Catholics say and do. One does not need to attack individuals in order to defend the faith. However, I believe it is also uncharitable to leave the truth buried in banality and fluff. Many people today are "led astray by all kinds of strange teachings". But, Christ didn't command anyone to laugh at the lost lamb - he commanded us to love one another, especially those who do harm against us. He exemplified this as he was beaten, crowned with thorns, and hung on the cross. "Loving" is not synonomous with "approval" of sinful words and actions, but it governs how we address these issues in the public forum and in our prayer life.

After sharing some of the "humorous" content found on blogs by well-intended Catholics with one of the Fathers of the Holy Cross at my parish, he said to me (paraphrased), "We can do more good by spending time in Adoration before the Blessed Sacrament in reparation for offenses committed against the Church than if we spend time laughing and poking fun at those who offend God". He also asked me to consider how many Divine Mercy Chaplets could be completed, for those who offend God, in the time it takes to make or view some of this content. This says nothing of the unseen damage done to those who are not as solid in their understanding of the faith who are then turned away by the off-color humor. Their view of more traditional-orthodox minded Catholics ends up repelling them, rather than drawing them. The last piece of advice given to me by Father in that brief conversation was that we all must consider the time we spend on the internet and weigh it against the time we spend in prayer, which goes back to his first comment.

I will provide more information in the future, but for the most part, much of the content will remain hidden until the site is actually launched. I'll put up a one pager within the next couple of weeks, God willing.

God Bless you all and I will try to put up a few posts per week in this blog, but need to focus as much of my time into AdOrientem.com as I have available, which isn't much. Prayers that the site follows the will of God are most welcome. If He wants this, it will come about smoothly and thus far, all is going well.

For news, I highly recommend using those sources in my upper sidebar. There are other great sources, but these are a few of my favorites, especially Zenit and Catholic World News.

Posted by Diane Korzeniewski at 12:46 PM