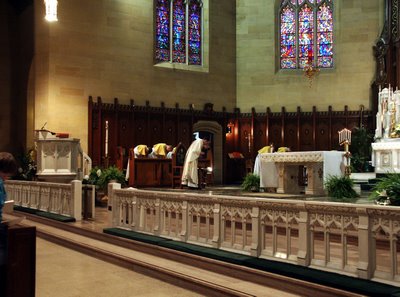 May 15 marked one year from the day I first discovered Assumption Grotto in Detroit. It was Pentecost and it was an Orchestra Mass. Having left my former irreverent Catholic lifestyle - you know, the kind that comes late, leaves early, sits on the pew like its a parkbench, and trips over the many other parishioners also leaving early to get to the local diner - I can reflect back on several changes in attitude with regards to the Mass that began abruptly from the moment I first walked into this fine parish.

I immediately picked up on the fact that the Grotto culture was highly reverent, which made me feel out of place. I recall telling God a few days later that I needed to find my sense of reverence and He responded by letting me know (in my heart, of course) that I never had any. It would have been easy to judge a culture with so much visible reverence. Some proclaim it to be a "holier than thou" atmosphere and I wasn't sure what to think because it was so......... different. But something kept gnawing at me to suspend judgment, just hang loose, observe, learn and reflect on it. It took a little time - a few days, maybe a couple weeks, but very quickly I came to realize this was the real deal, and it was the way people should behave in Church - very reverent ......... whatever that means. Reverent is, as reverent does, but if you haven't been taught how to be reverent, you can't possibly know. I decided that being reverent in my heart alone was no longer adequate before Jesus in the tabernacle, and in the Mass. Being reverent extends to life outside of Mass, but that's for another blog entry.

God is in the tabernacle, not some wafer. I recalled how Moses took his sandles off before the same God when He was in the form of a burning bush. Suddenly, I noticed the way I was standing (sloppy), the fact that my knees had grown so weak from doing only the Sunday slide - a half courtsey like motion where one barely genuflects as they smoothly slide into the pew - I couldn't genuflect properly. In some parishes I attended, genuflection is pretty much absent, even among those that still have the tabernacle - and God - central in the Church. I should know - I missed my own genuflection many times. I thought to myself, "this has to be fixed."

Among the topics I will explore in this blog are those related to reverence. Below, I want to call attention to something in the Creed. Those who first stumble naively into Assumption Grotto after a life time of attending Mass at more contemporary, "loose on reverence" parishes, may suddenly find themselves standing alone - that is, while everyone else is bowing during the segment of the Creed when we say,

Et incarnatus est (by the power of the Holy Spirit . . . made man)

Obviously, the first time I experienced it, I thought, "When in Rome, do as the Romans do" and down I went wondering when we were going to rise. My first cue was that everyone in the Sanctuary - the priest, altar boys, lector - all turned towards the tabernacle in unison, then bowed profoundly from the waist just as you see in the picture at the top. I vaguely remember priests informing us several years ago (I use to float to different parishes for Mass each Sunday), that we would need to bow during the Creed, and we did do this as a congregation..........for a few months. Then, most people, myself included, completely forgot about the pronouncement of this norm and lapsed back into ignorning it.

Reflecting back on this lapse, I now see the mindset that must be involved. Bowing in reverence is not some kind of mechanical thing we do to look pretty. First and foremost, it begins interiorly, with a profound bow of the heart. It is then that we find ourselves prompted to make an exterior sign. If done in this manner - one does not forget or lapse over time, unless we forget or lapse in our grasp of what is happening in Church and in the Mass.

When the people went down in a profound bow during the Creed at Grotto, I recall thinking, "oh, yeah - I'm suppose to bow in here somehwere".

WHAT DOES THE GIRM SAY?

Thanks to Assumption Grotto priests and parishioners, and their level of reverence, the whole thing had peaked my interest last year. So, I went digging into the General Instruction of the Roman Missal (GIRM) - one place we can refer to if we want to know the norms (setting aside translation issues). I found this:

275. A bow signifies reverence and honor shown to the persons themselves or to the signs that represent them. There are two kinds of bows: a bow of the head and a bow of the body.

1. A bow of the head is made when the three Divine Persons are named together and at the names of Jesus, of the Blessed Virgin Mary, and of the Saint in whose honor Mass is being celebrated.

2. A bow of the body, that is to say a profound bow, is made to the altar; during the prayers Munda cor meum (Almighty God, cleanse my heart) and In spiritu humilitatis (Lord God, we ask you to receive); in the Creed at the words Et incarnatus est (by the power of the Holy Spirit . . . made man); in the Roman Canon at the words Supplices te rogamus (Almighty God, we pray that your angel). The same kind of bow is made by the deacon when he asks for a blessing before the proclamation of the Gospel. In addition, the priest bows slightly as he speaks the words of the Lord at the consecration.

We'll talk more about these two things later ...... I'm off to work!
Posted by Diane Korzeniewski at 5:28 AM