It came as a shock to learn that Fr. Robert Altier of St. Agnes in MN has been reassigned to a nursing home chaplaincy. At the same time, the pastor of St. Agnes has unexpectedly stepped down, effective in mid-June. However, many of us read more into this than we probably should have. St. Agnes parishioner and fellow blogger Mitchell gives some insight into other reasons why the pastor may have looked for a shift in responsibilities. See his blog, Our World and Welcome to it! for this, and for updates.

Here is a segment of what was posted on Voice in the Desert, a lay-run website which once carried the homilies of Fr. Altier, before taking all publications down out of respect for holy obedience.

Father George Welzbacher, pastor of the Church of Saint Agnes, has issued a statement regarding the unexpected reassignments of both himself and Father Robert Altier. Sometime in mid-June, Father Welzbacher will be leaving Saint Agnes parish at his own request and move to an unspecified location. But the biggest surprise is Archbishop Harry Flynn's shocking decision to remove Father Altier from Saint Agnes and appoint him as assistant chaplain of a nursing home in an outlying district 30 miles southeast of Saint Paul-Minneapolis.

At the age of 45, Father Altier has served 17 years in the priesthood, 14 of those as Assistant Pastor at the world-renowned Church of Saint Agnes, and now Archbishop Flynn has decided it is just and proper to relegate him to a nursing home. This is a priest who generously spends long hours in the confessional bringing souls back to God, who has been responsible for guiding numerous young people to offer their lives in religious vocations, who for 17 years has painstakingly given instruction through his Fundamentals of Catholicism course to over 150 people each year and brought hundreds of converts into the Catholic Church, who is renowned for his skills in spiritual direction, who acts as board member and advisor to several orthodox Catholic organizations, and who up until recently had been preaching to a worldwide audience via A Voice in the Desert website and Relevant Radio broadcasting.

The Archbishop stated in a public email on March 20 that he asked Father Altier to cease his multi-media apostolates because it "might be beneficial to him and to the parish of St. Agnes." Apparently, he thought Father needed more time to fulfill his responsibilities at the parish. His Excellency then went on to invite people to "visit Saint Agnes where Fr. Altier continues to actively minister" if they wanted to hear him preach. But now he will reside at a nursing home. Isn't this a contradiction to what the Archbishop originally told us in his message of March 20?

No one should dispute that all of God's lambs are equally important and in need of solid Catholic priests, including seniors in a nursing home where pastoral needs are very high. An opportunity to bring someone back to God whether they are 19 or 90 must be rewarding. In fact, there is no doubt that Fr. Altier will use it as a virtue-building opportunity, just as he did when his media days were swiftly halted. I certainly can't judge why this happened, but statements coming from officials in that diocese have been mixed, at best (view the full range of news clippings and statements at the Voice in the Desert link below).

The move also raises other concerns. In an era when "anything goes" in some Catholic parishes (under the same Archbishop), Fr. Altier will be missed at the pulpit and on the airwaves. What a pity that those who are willing to preach the fullness of the faith without the sugar-coating are essentially benched, further depriving Catholics of what is rightfully theirs. I'll take a priest who is more concerned with my salvation any day over one so concerned with my self-esteem that he shields me from the fullness of truth and faith. God's love and mercy are very important, but so is a frequent reminder of His justice!

For more background go to A Voice in the Desert (direct link to article is below).

Father Robert Altier to be Assistant Chaplain of Nursing Home

Please pray for all concerned and that includes Archbishop Flynn because it is what Jesus would want us to do. Without love and charity, we are just clanging cymbals. Pray for the parishioners, as well. I can't imagine the trauma some must be going through upon losing both cherished priests abruptly, at the same time.

One thing on my mind, and on the mind of others I am sure, is what will become of the rich Catholic culture found at St. Agnes? Stay tuned. Some early indications are that the replacements will be solid leading me to believe things will be fine at St. Agnes, as unsettling as it may be.

For those who are unfamiliar, St. Agnes has a very rich traditional atmosphere and culture. Masses are very solemn and reverent. They have a one of the best music programs, including sacred polyphony with symphony (with audio samples on the website). The culture is devout with the kind of prayer life and piety that some would label as "rigid" or "old-fashioned" while the rest of us just call it Catholic.

I have to ponder what the vocation rate of this parish is in contrast to a parish like nearby St. Joan of Arc.

Here are some parting shots for this post - from the St. Agnes desktop photo section. 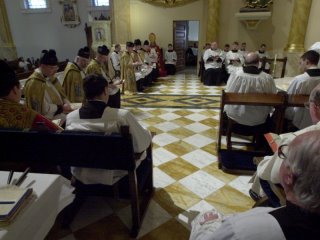 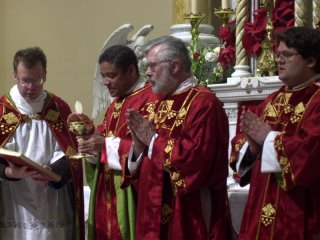 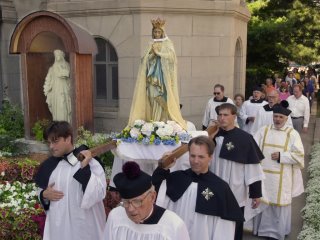 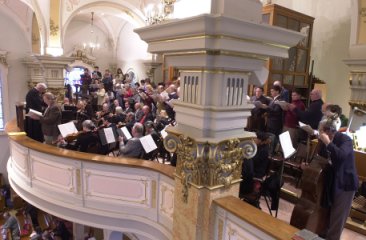 Posted by Diane Korzeniewski at 6:03 PM