The 12:00pm Mass was sparsely populated as most had gone to the Easter Vigil, or the 9:30am Latin Novus Ordo, or both. Each was solemn in its own way, explaining why so many choose to assist at both Masses.


The Noon Mass featured the visiting Assumption Schola. As I set up my camera in the choir loft to get pictures, their presence came as a surprise to me - a very pleasant one. It presented some wonderful photographic opportunities, which is evident in what is seen here. This first shot was taken following the Mass. Fr. Perrone joined them, mainly playing the organ, but also singing in some numbers. 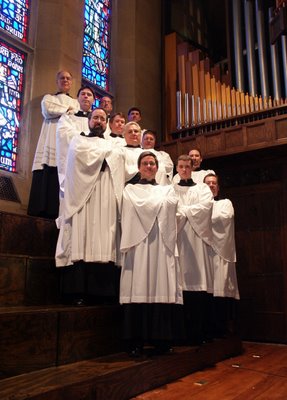 In what appears to be a pre-Mass strategy session, I would later learn that the schola was focused intently on the director delivering news that his wife is expecting. Congratulations! 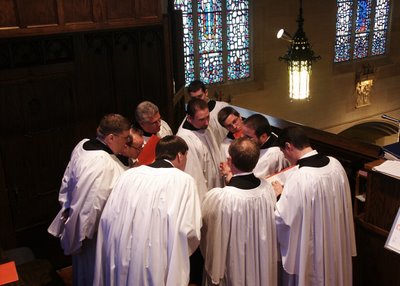 One of the photographic opportunities was to capture Fr. Perrone at the organ, in a neatly pressed surplice, with Fr. Bustamante stepping up in to the sanctuary as the Noon Mass got underway. In the foreground on the right, is the upper portion of the choir director's stand, which contains a built-in, wooden cross. I had to stand in the nosebleed section of the choir loft risers. I won't divulge how much I fear heights. 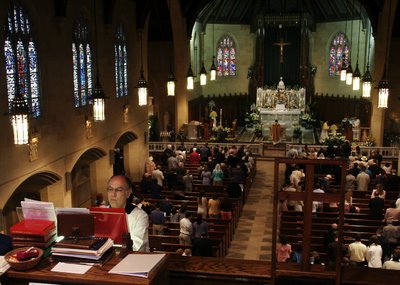 As I sat on a chair next to the organ listening to the readings, I looked over and found Fr. Perrone with eyes closed, meditating as he so often does at such times. I had noticed the beauty of the organ pipes in the background and thought if I could get low enough, I could capture the Alpha and Omega sign on the organ pipe cross bars. The organ light prevented them from being seen, but added to the portrait quality of the shot. 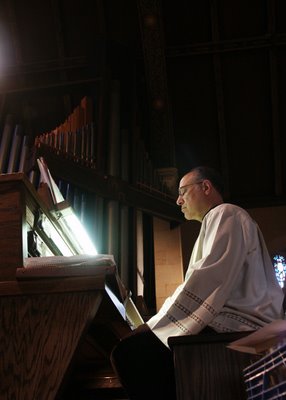 A picture of the schola while singing, with the pipes in the background. If only I had a wider angled lense. It was tight quarters up there and I could not capture the full schola in action. 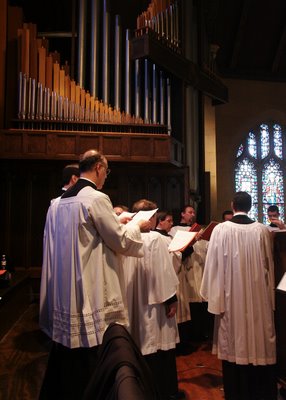 At this Mass, Fr. Bustamante celebrates at the center, table altar, or "low" altar. 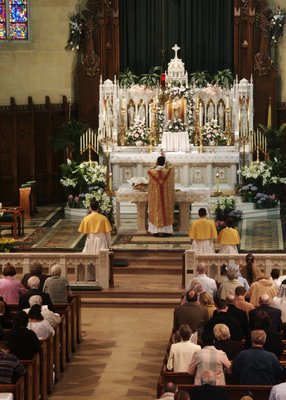 A picture of the Assumption Schola following the Mass, down in the sanctuary. There are a few things I wish I had done differently to capture a better shot, but it's not too bad for a first attempt. The lighting within Grotto presents challenges with picture taking. The same setting on my Dimage 7i does not yield the same results at different times of the day or as other lights are turned on. 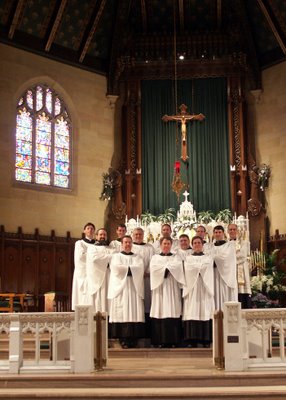 Posted by Diane Korzeniewski at 8:03 AM