Photo of the Day - Call to Holiness in Prayer 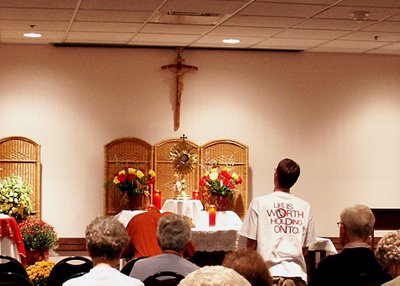 This picture was taken at the October 2005 Call to Holiness Conference in Sterling Hghts, Michigan. A conference room was transformed in to a 24 hour Adoration chapel and was filled well. The young man pictured with the "life" shirt walked in and went right up front and knelt in adoration, praying a Rosary for the unborn. He said to me later, "Every Hail Mary I pray, helps save another baby".

I don't think scenes like this will be coming from a Call to Action Conference.


Call to Action (CTA) is a Catholic movement working for equality and justice
in the Church and society.

I wonder what the average age is. Moving right along.....

CTA believes that the Spirit of God is at work in the whole church, not just in its appointed leaders.

Yes, and as Fr. John Corapi said, "Unity must subsist in truth!" If you have an army division heading one way, and a single platoon heads in another direction against their orders, they will find themselves without support, and eventually get ambushed. So, you have this dissenting organization of people, promoting values which are in conflict with the Catholic Church, some of which are highlighted in this article in Catholic Culture called, "The Contrast of Call To Action vs. Church Teaching".

Am I alone in pondering how the "Spirit of God" can be influencing both the Church and this dissenting group all at the same time? That's like saying a car can be headed north and south while traveling in the same direction. Or, that it's possible to be misaligned and aligned. Right! If I had to meet my Maker tomorrow, I'd rather go knowing I didn't mistrust Him in such a way as to believe it was not the Church being influenced as opposed to this group of 25,000 people. I don't recall Christ teaching via democratic vote anyplace in scripture.

CTA promotes its vision of a progressive, engaged Catholicism through its acclaimed annual conferences, award-winning publications, extensive network of regional groups and joint programs with other Catholic renewal organizations.

Phew! That's one of the longest sentences in one of the longest Mission Statements and it took all that time for them to get to the word "progressive". For some reason, I don't think God is going to care how many worldly awards they have received, but he may have something to say about the many souls led away from authentic Catholicism. The sad part is that it is cloaked in "peace" and "justice". What you have is superficial peace and justice, because true peace and justice comes only when it is rooted in truth.

Call to Holiness - A Contrast

Call to Holiness is an organization of Catholics, obedient to the Vicar of Christ, faithful to the eternal truths of Jesus Christ. Our purpose is to defend and support the Magisterium, the teaching authority of the Catholic Church, through prayer, education and evangelization.

Now that's a mission statement. Members won't be advocating women's ordination or a woman's right to choose, or free love, but they will be found in a variety of services and apostolates doing everything from supporting a crisis pregnancy clinic, visiting the sick, feeding the poor, prison ministry and any number of other good works.

Now lets go pray for these 25,000 and a multitude of others who have become sadly disoriented. It's the most important thing we can do for authentic unity in the Body of Christ.

What say you? Go ahead, comment!
Posted by Diane Korzeniewski at 6:23 AM