My Lord and My God!

This picture, which is featured at the very bottom of this blog, is being brought to the forefront once again. It was taken at the outdoor Grotto we have in the cemetary behind the parish. A little history can be found at the Michigan Historical Markers site. I suppose I should offer more background at a later date.

It was Assumption Day - August 15, 2005. Pictured below is the Elevation of the Host during the 7:00 pm Latin Novus Ordo Mass. It was fine weather, and well attended. This particular photo was picked up by The Wanderer, and featured on the front page of an early October edition.

People often ask what, or who, that is in the lower left, appearing like a veiled head. Well, it is the veiled head of St. Bernadette, one of two new statues - the other being the angel visible in the picture. More on these later.

The name of this photo is:

My Lord and My God! 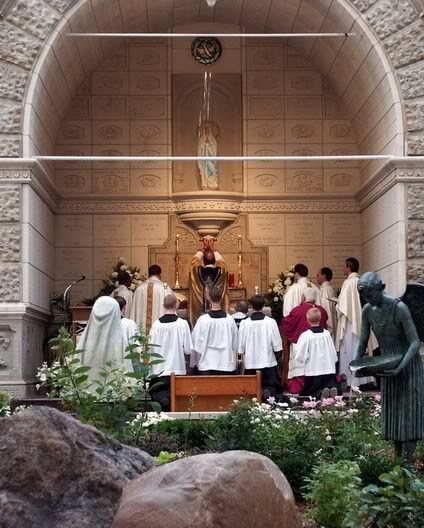 Posted by Diane Korzeniewski at 10:54 PM