One More Photo of the Day - CTH Q&A

Fr. Donald Calloway, MIC talking about priests in cassocks boldy proclaimed in his DVD (paraphrased): "They're coming to a parish near you!"

Hehehe.....they're already here! Cassocks speak volumes. You don't have to wonder which Magisterium these guys support. 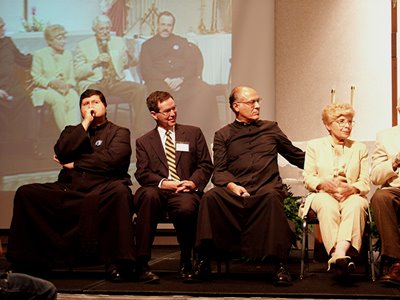 I couldn't help myself. I had to add another picture I took at the October 2005 Call to Holiness Conference. Keep in mind this was held at the Sterling Inn so it does not make for one of the finest backdrops. However, the big screen presented some interesting photographic opportunities.

Not seen in the picture above, also speaking at the conference were Jeff Cavins, and Raymond Arroyo. Check back in the coming days for more photos from the 2005 Call to Holiness Conference.

There was a brief and colorful Q&A session. I call it colorful because if you have never seen Bob and Penny Lord in person, you wouldn't get it. They are hilarious in this kind of setting, unlike their very formal appearances on television. People of all ages enjoyed their talks.

The panel was made up of, from left to right:

One of the questions I remember very vividly was when a person asked if their grandchild was properly baptized. Apparently, the priest who performed the baptism, did so in the name of the Creator, Redeemer and Sanctifier. Fr. Perrone fielded the question and without hesitating said that the child had not received the Sacrament of Baptism and should be baptized properly. Some gasped in the audience at the notion that this child, who was already 8 or 9, if I recall, had never been baptized as an infant, as all had believed.

And, another priest answering it very simply here.