Detroit's Archbishop, Allen H. Vigneron, was interviewed by local ABC affiliate, WXYZ. There is a much longer interview on local radio. You can listen by going to this link at the Archdiocese of Detroit (may load slowly so be patient).  You can also find the link on January 23, 2012 at the page of the interviewer, Frank Beckman at WJR.

This was a very good interview and the Archbishop points out why so many other groups should be concerned with the impact that this could have on the Catholic Church.

The exemption that the Obama Administration wants to give is ridiculously narrow.  What it means is that Catholic hospitals, universities and other institutions would only qualify for the exemption if they limited their service and employment to Catholics only!!! 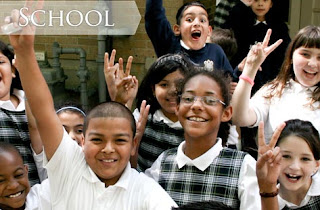 If a hospital were to hire only Catholics to work in Catholic hospitals, and only serve Catholics, they would then likely be charged with discrimination; so on it's face, it's a catch-22.  Further, what if a Muslim, Hindu, atheist or Protestant were to end up in an accident at the intersection of the hospital, what is that hospital suppose to do - refuse treatement because they aren't Catholic?  What if that is the hospital where their practitioner practices and to go elsewhere would drive up out-of-pocket expense for going, "outside of network", which may ultimately be prohibitive? How does that impact the rights of individuals to choose their own doctor?

Many non-Catholics have chosen to go to Catholic schools and universities.  Should these institutions post a sign that says "non-Catholics need not apply?"  What about the rights of students to attend a school of their choice, with full knowledge that at a Catholic institution they won't be able to get certain things because those things violate the conscience of Catholics? They no longer have a choice to attend such a school, even if they are willing to accept such a practice.  How many non-Catholic students attending Belmont Abbey College would choose to go elsewhere, if they knew couldn't get a condom on campus, or birth control pills?  How many employees would reject an employment opportunity with Belmont Abbey College if their insurance didn't cover these things?  Do students and employees not have a choice to go to hundreds of other colleges that do offer these things?

And then, there are the soup kitchens and other services for the poor, like warming centers and shelters, and adoption centers.  Can you see a Catholic soup kitchen refusing to serve non-Catholics?  Perhaps this mandate doesn't fully impact these services in the way it does hospitals, but who is to say that it won't - eventually? Ponder for a moment the loss of all of these things to a community because they won't cover condoms and birth control pills.  What does it mean when a soup kitchen must close? Are we to believe the government is going to step in and take over?

Here's the bottom line:  Obama is trying to destroy all of the good that the Catholic Church does in terms of service to the community, and he is using dissident Catholics in his administration to do it.  How much more do the bishops need to see from certain Catholic politicians before they take public action? As long as the bishops are silent on this aspect, Obama, and the media can continue to pedal them as, "devout".  The fruit of reticence couldn't be more manifest than in the scandal caused for decades by Catholic politicians and school officials who retain good standing in the Church despite persistent public actions in opposition to the Church.  That said, I'm very glad to see our bishops speaking out, and boldly; but, until they do something about the pseudo-magisterium of theologians, politicians, and nuns, they have a real uphill battle.

The net effect of this is very clear.  It means the end of Catholic hospitals, schools, soup kitchens and more.  There really can be no other way to look at it because that is the long term effect.  The Catholic Church will not permit what it considers to be a violation of the 10 Commandments in order to do other goods (Veritatis Splendor 75).  It won't do it, because it can't (setting aside those officials at Catholic-in-name-only institutions who distort Catholic teaching using a pseudo-magisterium of theologians). 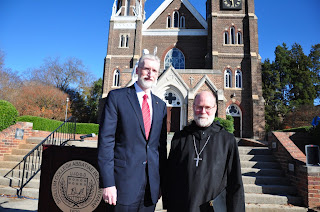 ALL EYES ARE ON BELMONT ABBEY COLLEGE VS. SEBELIUS

Now, there is a case winding it's way through the system thanks to the Becket Fund.  You will want to follow the case of Belmont Abbey College vs. Sebelius.

The Becket Fund for Religious Liberty represents Belmont Abbey College, a Catholic liberal arts college founded by Benedictine monks, in a lawsuit against the federal government to protect Belmont Abbey’s right to be true to its principles. As a Catholic college, Belmont Abbey teaches that contraception, sterilization, and abortion are against God’s law.

So in August 2011, when the federal government issued a regulation requiring that all group health plans must cover “[FDA-]approved contraceptive methods, sterilization procedures, and patient education and counseling for all women with reproductive capacity,” Belmont Abbey knew it could not be true to both the government mandate and its Church’s teachings. This is so because FDA-approved contraceptives include a number of drugs Belmont Abbey, and many scientists, consider to be abortifacients—most notably Plan B and Ella. Were Belmont Abbey to choose not to cover contraception and sterilization as required by the government mandate, it would be penalized with a hefty fine and forced to terminate its health insurance for employees and students. For example, a religious organization with 100 employees would have to pay the federal government $140,000 per year for the “privilege” of not underwriting medical services it believes are immoral. In other words, Belmont Abbey would be forced to pay for the right to remain true to its principles!

Although the government regulation includes an exemption from the mandate for certain religious employers, Belmont Abbey believes that it will not be exempted from the mandate’s requirements. The exemption is extremely narrow... [continue reading at the Becket Fund site]

If you want to help, consider going to that page at the Becket Fund for Religious Liberty and donate, then spread the word. Support them generously.

I was trying to find the full text or audio/video of the main homilies at the March for Life.  If anyone has a link to these, please drop them into the combox.  I found people claiming to have "full text" but they were merely news reports.


The obedient are not held captive by Holy Mother Church; it is the disobedient who are held captive by the world!
Note: The recommended links below are automatically generated by the tool, so they are not necessarily related content.
Posted by Diane Korzeniewski at 12:47 PM