Archbp Vigneron on HHS Mandate: The Constitution speaks of 'freedom of religion,' not 'freedom from religion.' 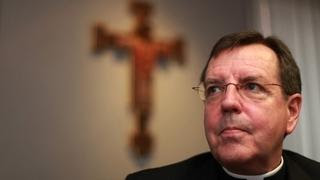 Freshly released from the Archdiocese of Detroit is this statement by Archbishop Allen H. Vigneron on the HHS decision.


The Catholic bishops of the United States have vowed to fight a mandate from the Department of Health and Human Services forcing all health care plans to provide contraception and sterilization coverage. This will revoke a decades-long conscience exemption for religiously affiliated plans. Detroit Archbishop Allen H. Vigneron made the following remarks regarding the mandate:

“During the same week we commemorated the life, ministry, and message of Dr. Martin Luther King Jr. and his advancement of civil rights in this country, the Federal Government took the unprecedented step to affirm its discrimination against Americans exercising their right of conscience. With its edict on contraception and sterilization coverage in all health insurance plans, the Department of Health and Human Services is forcing insurers and purchasers to choose whether or not to violate their moral and religious beliefs. The inalienable rights guaranteed in our country’s founding documents are being trampled. Where is the ‘liberty’ in a decision to intrude on freedom of conscience? The Constitution speaks of ‘freedom of religion,’ not ‘freedom from religion.’


“Lawmakers in Washington need to step up, step in, and protect the rights of their fellow citizens from a government mandate that is truly unconscionable. This fight against the Federal Government’s over-reaching exercise of its power is everybody’s fight. As Pope Benedict reminded us just days ago, as citizens of the United States, we Catholics serve the whole nation by our witness to our moral convictions and our defense of the liberties that will always be ours by right, not by the permission of the government.”

I will be bringing more reactions in the coming days.

If you didn't see it yesterday, here is the USCCB issued it's statement.

More to come...
For interesting news items I don't have time to blog on, check out my Twitter Feed: @TeDeumBlog


The obedient are not held captive by Holy Mother Church; it is the disobedient who are held captive by the world!
Note: The recommended links below are automatically generated by the tool, so they are not necessarily related content.
Posted by Diane Korzeniewski at 9:15 PM