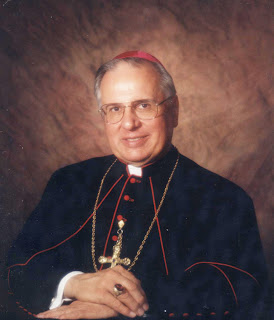 Jim Graves at the National Catholic Register (not the dissident "Reporter"), has an excellent story on Bishop Fabian Bruskewitz, 76, of Lincoln, Nebraska.  He is entering his 20th year as bishop of that diocese.  There is some interesting background which then leads into an interview.  One question put forth concerns excommunications he publicized in 1996 (and which were upheld by the Holy See)

That year I became more famous than I ever intended or wished to be. I issued the decree to clarify that one cannot be a loyal Catholic and a member of certain organizations. Call to Action, for example, advocates homosexual “marriage” and other distortions of Catholic teaching. I said that Catholics had a certain time to withdraw from such organizations or face canonical penalties.

It hit the national news, and I was interviewed for radio and television programs, such as The Today Show. The reaction I received was overwhelmingly favorable. I received about 50,000 letters of support, versus about 300 negative letters. I’d come home, and I could hardly get into my house, because supporters had sent me bouquets of flowers and baskets of fruit that arrived on my doorstep. Our diocese received a half-million dollars in donations.

Many bishops privately offered me their support. Some were astonished, but many said what I did was great, even if it wouldn’t work in their part of the world. I never intended it to be an example to others. It was part of my job as shepherd and chief pastor of Lincoln.

I believe we sometimes have to take steps to move beyond the intellect to motivate the will. Sin is not in the intellect, but the will. We do have to inform people about Church teaching, but once that is done, some choose to be willfully sinful. A great lawyer can know the law but still be a criminal. People can know what is right but do wrong. So, in regards to the excommunications, I believed I had to do something. Sometimes action must be taken.

Here is another interview from 1996 by James Likoudis on the excommunications, at EWTN.

Just think how the landscape might be different today if bishops had taken a unified approach with Bishop Bruskewitz in 1996.  Catholics involved with those organizations would know exactly where they stand, and what must be done to regularize their status.  The secular media would not be able to parade people from these organizations in front of other Catholics in an effort to create dissonance.  Ordinary Catholics in the pew who get their "catechesis" from the New York Times would not be scandalized as badly if everyone was clear about the Church's position on these groups.  Furthermore, politicians with agendas that conflict with the natural law and Catholic teaching would not be able to hide behind these people and organizations to mislead Catholic voters.

Let's pray that our bishops change their approach to groups like these in ways that will seriously hinder their ability to undermine the apostolic successors as they have done for decades.  If they operate nationally or internationally, the USCCB ought to have a list of organizations on their website that would make clear to media outlets and politicans those that are out of harmony with the Catholic Church.  It's because these groups seem to enjoy support from some bishops, even if only by their silence about them, that more of the faithful are misled by them.

I really think the HHS mandate has awoken a sleeping giant.  Perhaps God permitted all of these things to happen to light a fire under the seat of bishops' cassocks.

If you want further reading on that, Joan Frawley Desmond has a new article out: Sebelius' Contraception Mandate and the Media


UPDATE:  Here is the statement by Bishop Bruskewitz on the HHS mandate
For interesting news items I don't have time to blog on, check out my Twitter Feed: @TeDeumBlog


The obedient are not held captive by Holy Mother Church; it is the disobedient who are held captive by the world!
Note: The recommended links below are automatically generated by the tool, so they are not necessarily related content.
Posted by Diane Korzeniewski at 12:14 AM