Some months ago I wrote a post on Juventutem of Michigan. I am copying that into this post so you can read more about it. The reason I am doing this is because the chapter is coming to Assumption Grotto tomorrow night.

There will be a Solemn High Mass at 7:00 PM, preceded by a Rosary at 6:30 PM. While Juventutem is for 18-35 year olds, the Mass is open to anyone wanting to come. Here is the Facebook page for tomorrow's event.

Below is what I had in my post on this group back in May...

The Michigan Catholic has a story on a Juventutem chapter here in Southeast Michigan. It is for those who are 18-35 who are devoted to the Mass of 1962. This is an interesting story. I had the pleasure of meeting Paul Schultz back in early March and he explained some of what he and his friends were doing.

The last I heard, there were probably over a dozen parishes that had offered the extraordinary form Mass (aka, "Tridentine"), at least once a month or more. I'm not sure where those all are, but if people want to name them, and the Mass days/times in the combox, it would be an interesting collection.

I would think that Juventutem here in southeast Michigan would want to periodically move on different ends of the area for some Masses to draw additional members. With a little advertisement, I think it would grow, especially as the curious explore when they see the event coming to a parish near them. Unfortunately, so many of the suburban parishes are just not suited for the older form of the Mass. The altar can be transformed by experienced people in a matter of 20 minutes or so, but the backdrop offered by older parishes adds to the richness (not to mention the sound of chant and polyphony with the awesome acoustics in the old buildings). I'll start you out with the beginning of the article:

Ann Arbor man, 29, helps start first U.S.chapter of ‘Juventutem’
Detroit — Paul Schultz might seem like an unlikely person to start up a local chapter of Juventutem, a group dedicated to the Extraordinary Form of the Roman Rite, commonly known as the Tridentine or Traditional Latin Mass.


Not only was the 29-year-old attorney not around when the Tridentine Mass was the common form of the sacred liturgy in Catholic churches, but he didn’t even become a Catholic until his college years.


And the first time Schultz attended a Tridentine Mass, he arrived late and they had run out of missalettes, he said, so he couldn’t even follow along with what was being said.


“But I saw a whole church full of people behaving as if God was really up there on that altar,” Schultz said.


Schultz, who was raised a Lutheran, said he had heard friends describe the Catholic Church’s teaching on the Real Presence, but his previous experiences at Mass hadn’t convinced him they really believed it.


But the Latin Mass, he said, turned out to be a pivotal experience in his faith life.
Now, he and four other 20-somethings have started the first United States chapter affiliated with the Juventutem International Foundation, a Tridentine group for young adults.


“Juventutem” is Latin for “youth” in the accusative case, as it appears in the prayers at the foot of the altar that precede the Tridentine Mass.


Schultz is the oldest of the founding membership of the chapter, which also includes James and Shauna Hitchcock, Andrew Fanco and Aaron Harburg.


Young people kneel during a Tridentine Mass on April 27 at St. Josaphat Church in Detroit. The Mass was the first gathering of Juventutem, a group for young people dedicated to the traditional Latin Mass.


They see Juventutem as a group for like-minded Catholics between the ages of 18 to 35. The group will meet periodically to attend a Tridentine Mass, followed by a social get-together.

Membership is open to Catholics within that age range willing to commit to a six-point program of prayer and participation that can be found online at juventutemmichigan.com.


Continue reading this interesting article on Juventutem at The Michigan Catholic

That is how I found this: 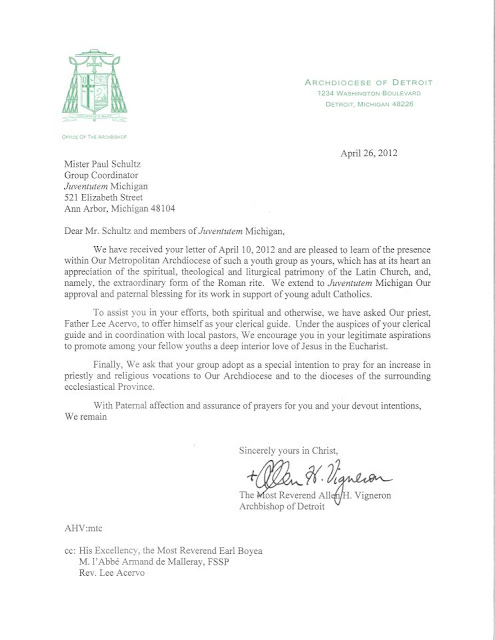 Congratulations, Paul Schultz, et al!   I'm also very glad to see Fr. Lee Acervo involved.  His mom and dad are in my Carmelite community at Grotto and he is a very solid priest .... who has a blog!

Note: The recommended links below are automatically generated by the tool, so they are not necessarily related content.
Posted by Diane Korzeniewski at 8:26 AM