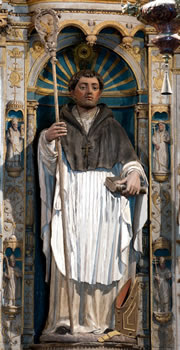 Republishing this from the other day.  Events begin at Assumption Grotto on September 13th.

Those who frequent Assumption Grotto are familiar with the religious order priests and sisters who have been assisting there for over a decade now. The Order of Canons Regular of the Holy Cross (ORC not OSC) are remembering the 850th anniversary of the death of their co-founder, St. Theotonius, with the veneration of his relic.  My comments are bracketed below.

On the occasion of the 850th anniversary of his death, during this “Year of St. Theotonius” (February 18, 2012 to February 18, 2013), a major relic from Coimbra, Portugal of the arm of St. Theotonius is on an international tour of 11 countries to all the monasteries of the Order of Canons Regular of the Holy Cross. It will be available for veneration in the Archdiocese of Detroit at Assumption Grotto Church (13770 Gratiot Ave, Detroit) from September 13 to 16, 2012.

As a designated Church for the veneration of the relic by Archbishop Vigneron, the Holy See has granted under the usual conditions a plenary indulgence for all who participate in an event honoring the Saint. The elderly, sick, and those unable to attend for a serious reason, are likewise able to gain a plenary indulgence under the usual conditions by spiritually joining in the jubilee celebrations, offering their prayers and sufferings to the merciful God through Mary.

Archbishop Allen Vigneron of Detroit will celebrate the Holy Mass on Saturday, September 15, feast of Our Lady of Sorrows [at 9:00 AM]. On Sunday, September 16, a newly ordained priest of the Order will celebrate a solemn Mass of thanksgiving. See complete schedule on the back [link below].

If I had to guess, I believe this will be the newer form of the Mass, but it will be celebrated ad orientem at the high altar, and possibly in Latin. The last time Archbishop Vigneron celebrated Mass at Grotto - on August 15, 2009 - he celebrated a Latin Novus Ordo, ad orientem.

SEE THIS FLYER FOR HOURLY AND DAILY EVENTS

Note: The recommended links below are automatically generated by the tool, so they are not necessarily related content.
Posted by Diane Korzeniewski at 6:30 AM