Should bishops permit "seers" of unapproved apparitions to speak in their dioceses? 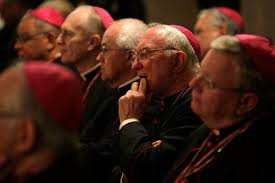 There is a pretty hot discussion taking place over at the blog of Catholic apologist Patrick Madrid based on an earlier post I made in which I talked about the actions of Bishop Peter Sartain.

The discussion is going on in two places:

Patrick's blog:  A bishop's warning about the promotion of unapproved "apparitions"

I have made a single post at my other blog compiling something I was trying to convey over several comments at Patrick's blog:  Should bishops allow "seers" of unapproved apparitions to speak in their dioceses?

WHY IT IS DANGEROUS TO GET ATTACHED
TO UNAPPROVED APPARITIONS

One only needs to look to the example of Holy Love Ministries in Cleveland and what has happened since the "apparitions" there were condemned as "not supernatural".  It was the Holy See which directed Bishop Lennon to, "make a definitive judgment".  Definitive means final, and the fact that he was directed to do so by the Holy See is evidence that his decision is the decision of the Church.

But, followers who became attached to the "apparitions" there, have placed their own discernment capabilities above those of the Church. In the meanwhile, the "apparitions" themselves have issued their own decree against the diocesan bishop (a sure sign of fraud or diabolical involvement), and have continued to suggest that people not pay any attention to him.  There are some priests out there, still scheduling pilgrimages to this very strange place.  Do not be led away by all sorts of strange teachings! (Hebrews 13:9)

Setting all of that aside, I have received emails from people defending Holy Love, some of whom have told me that they have a master's degree in theology and they see nothing contrary to Church teaching.  With all due respect, these people should ask for a refund if it was from a Catholic university.

The Church urges caution, not promotion, of private revelations which have not been given approval for a cult following.  While private pilgrimages are permitted for Medjugorje (this means not organized by the diocese or parish), and on condition that they do not presuppose supernaturality, Medjugorje has never been granted such approval.  The 1978 Criteria for Discernment of Apparitions staes:

b) Then, if this examination appears favorable, to allow certain public demonstrations of cult and devotion, while continuing to investigate the facts with extreme prudence (which is equivalent to the formula: “for the moment, nothing is opposed to it”).

There has never been a favorable examination of Medjugorje, not by two consecutive bishops, and not by the any of the three previous commission, the last of which, in April of 1991, voted 19-1 for the current status (it cannot be affirmed as supernatural).

Could the new commission on Medjugorje allow for a cult following in the future? Anything is possible, but this commission will need to overturn the decision of the the last commission, and answer the reasonable objections raised by the local bishop.  One such example, is what the bishop highlighted in a document entitled, "The Games Surrounding the Great Sign" in which he used the writings of Medjugorje protagonists to make his case against authenticity.

The obedient are not held captive by Holy Mother Church; it is the disobedient who are held captive by the world!
Note: The recommended links below are automatically generated by the tool, so they are not necessarily related content.
Posted by Diane Korzeniewski at 11:49 AM