Persecution of Catholics in Vietnam - the case in Dong Chiem

The next time you feel too tired to go to Mass, or it becomes "burdensome" to practice your faith in any way, think about these people.  This goes on in many parts of the world while we go about our business and take our freedoms for granted.

Pray for the Church in Vietnam, and in Asia....

HANOI - A VIETNAMESE Catholic monk was beaten and seriously injured after trying to reach a parish which remained sealed by police two weeks after unrest over a crucifix, the local priest said on Thursday.

After they seized his camera and mobile phone, he was making his way back when he was attacked by unknown assailants and left with serious head injuries, Huu said, adding Tang was taken to Hanoi for hospital treatment.

'Roads leading to the parish were still blocked by the authorities on Thursday morning', as they had been since the day after the cross incident early this month, Huu said. Local police declined to comment to AFP.

Unrest broke out on January 6 when parishioners tried to stop a large group of police and troops sent to dismantle the crucifix atop a mountain, according to Huu.

He said parishioners told him the police used electric prods, tear gas and stones against the crowd, two of whom were seriously injured. Huu was not present at the time of the incident.

The Hanoi archdiocese has strongly protested the continuing violent attacks against Catholics at a Dong Chiem parish, after a Redemptorist brother was severely beaten and left unconscious.

The archdiocese reports that a delegation of Church officials, visiting the Dong Chiem parish to investigate reports of police harassment, “was completely besieged as police at checkpoints prohibited any outsiders to get in.” At the checkpoint, Brother Anthony Nguyen Van Tang was brutally assaulted by police officials. He was carried away, unconscious, by his colleagues—whose clothes were soaked with the Redemptorist brother’s blood.

Attacks on parishioners at Dong Chiem have become commonplace, the Hanoi archdiocese charged, and police are blocking all entrances to the church, leaving the parish virtually under siege. The Redemptorist order in Vietnam has also lodged an official protest, demanding an end to the police action that began with the demolition of a crucifix at the parish cemetery.


Catholics in Hanoi fear that the government will use its propaganda machinery to stir up public sentiment against Catholics, leading to mob violence against prominent Church targets. Archbishop Joseph Ngo Quang Kiet has reportedly taken refuge outside the city to avoid confrontations, recognizing the likelihood that pro-government crowds will demonstrate outside his residence, demanding his resignation.


Here's a little more from AsiaNews:


Dong Chiem is becoming a "Mount of Crosses"

Hanoi (AsiaNews) - Dong Chiem is practically under siege, with checkpoints on roads and bridges, set up by new contingents of police who are flowing into the area. This is the response of local authorities to peaceful protests of thousands of Catholics against the blowing up of the cross that stood on the hill, a site that for over a century has belonged to the parish in the town near Hanoi . 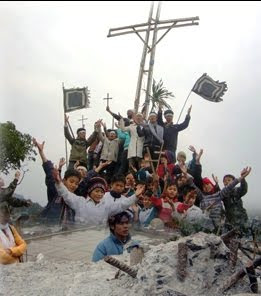 News of the destruction of the cross and attacks suffered by some Catholics, including journalist JB Nguyen Huu Vinh and father Nguyen Van Lien, of the parish of Dong Chiem, has provoked a demonstration by 2 thousand Catholics from the nearby parish of Nghia. Together with local faithful, they have staged a protest outside the office of the People's Committee.

To the efforts of the security forces - and the violence of their gangs of thugs - the faithful respond with pilgrimages where everyone tries to plant a cross next to the bamboo crucifix erected on Nui Tho to replace the one that was destroyed. "We will make this hill a Mountain of the crosses, like the one that Catholics created in Lithuania in Communist times," says a student in Hanoi after his team (pictured) succeeded in planting dozens of crosses on the hill , passing checkpoints and other measures of police seeking to stop the faithful. There are already hundreds of crosses planted on the hill.

Since learning of the destruction of the cross, in fact, Catholics of all in northern Vietnam are trying to go to Dong Chiem. And the authorities probably surprised by the magnitude of the reaction, are doing everything to prevent it, while minimizing the number of those who undertake the pilgrimage.

Yesterday, for example, as told by Father Joseph Pham Minh Trieu, a group of thousand people, led by him, had to cancel the trip, "the police confiscated the license of all our bus drivers." Hundreds of parishioners at Ham Long, however, used their motorcycles, and passed. Among them was the group of Hanoi students. They reached the summit of Nui Tho, which has become "the mountain of prayer" where they enacted the Way of the Cross. Other faithful managed to arrive by boat.

The Bishop of Kon Tum, Mgr. Michael Hoang Duc Oang, unable to go in person to Dong Chiem, sent a letter of support to the Archbishop of Hanoi, Mgr. Joseph Ngo Quang Kiet, in which he writes: "your joy and your pain is also mine." The bishop recalled that he is from the parish of Dong Chiem and that what took place January 6 had a great effect on him.

There have been a flurry of stories out of Dong Chiem just in the last few weeks.  Click and view the headlines and read some of what is going on there.


Pray for persecuted Catholics around the world

Posted by Diane Korzeniewski at 11:25 PM