The Italian Catholic website, Petrus, has just published an article featuring an interview with José Cardinal Saraiva Martins, CMF on the subject of Medjugorje.  He is a Cardinal-Bishop - a member of the highest order of the College of Cardinals, and is the Prefect Emeritus of the Congregation for the Causes of the Saints.  In their introduction to the Portuguese cardinal, Petrus points out:


Richard Chonak gives us an english translation of the newly released article, which includes discussion on the recent visit by Cardinal Schonborn of Vienna to Medjugorje.  He also mentiones Bishop Peric - the local Ordinary of Mostar-Duvno and touches on the subject of obedience to him.


[He is] a close and trusted collaborator first of the Venerable John Paul II and later of the Supreme Pontiff Benedict XVI; rector of the 'Urbaniana' University much praised by Paul VI; a theologian, former Prefect of the Congregation for the Causes of Saints and a great expert on the Marian apparition, officially recognized by the Church, of Fatima. 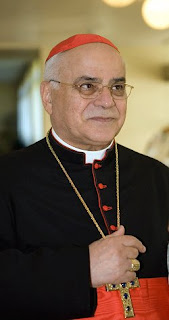 Cardinal Saraiva Martins contrasts Medjugorje with Fatima.  The apparitions of Fatima were deemed worthy of belief by the Church, while the phenomena associated with Medjugorje is not proven to be supernatural, and the investigation is ongoing.  In Fatima there were three shepherd children of humble means, who found ways to become even more humble, following a path of silence, and in the case of Sr. Lucia, leaving the public eye fairly quickly for the rest of her life (Jacinta and Francisco died young).  He contrasts that with the the example of the alleged visionaries of Medjugorje who live a very different life.

Is Medjugorje a continuation of Fatima as has been alleged?  He sees nothing to support this, and if anything, contradictions.

The Cardinal talks about the many good fruits like conversions, but encourages the faithful to not assume that the alleged apparitions are the cause of these things.  In fact, while he acnknowledges it's ok to go there and pray, he admonishes people not to do so assuming that the apparitions are worthy of belief before the Church declares on the authenticity, or lack thereof.  Speaking on how those making private pilgrimages should proceed, His Eminence says:


"He must not take for granted and must not become convinced that the apparitions are authentic; therefore, he must go to the place to pray, but not through his presence to acknowledge the authenticity of phenomena whose approval depends solely and exclusively on the Church, and which in any case neither subtracts nor adds anything to Revelation, which is already complete in Christ."


One of his answers hits a point I drive home often.  Here is the question, then the answer:


Eminence, in some of the apparitions, the Virgin is said to have asked the six "seers" of Medjugorje not to obey the prohibitions of their diocesan Bishop, such as, for example, to not speak publicly any more of the alleged "visions".


"The Madonna could not, in any case at all, be anti-hierarchical and incite disobedience, even if the Bishop of Moster were wrong. This is another element on which to reflect."


In the author's introduction to the interview, the Petrus article captures something very well:


But what, then, are the fruits of Medjugorje? Those who believe in the seers speak of miraculous cures, deliverances from evil, conversions; it is beyond doubt that many people pray, receive Holy Communion, and make confessions in the town. But the "skeptics", those who do not believe in the authenticity of the apparitions, underscore the division among the people of God, between supporters and opponents, to show that this is a case of deception. "Devil", after all, means: "he who divides".


Here is the link to the full translation again, by Richard Chonak at Catholic Light: From Petrus: Cardinal Saraiva is also a skeptic on Medjugorje

One of the most extensive and thoroughly documented works online is the ever-growing website of Italian professor/author, Marco Corvaglia. He has an english section that is well worth bookmarking and reading.  He has JPG's of actual documents, videos, and backs everything he writes up with some form of documentation.

Special thanks to Richard Chonak of Catholic Light for his rapid translation of the Petrus article, and extensive archives!

Posted by Diane Korzeniewski at 9:40 PM