6 Part Series on the Mother of God

I regret having forgotten to post this event sooner.

I just learned that Dr. Fastiggi will be doing the first of this six part series, which begins tomorrow night - Friday, January 8th, at Ss Cyril & Methodius in Sterling Heights, MI.  While there is an RSVP, this was intended to get a rough count so they would know about seating.  However, I don't think a handful of people showing up will get turned away, so if you aren't too far, head on over to this talk.

Soon we will learn the dates and speakers of the remaining 5 talks.

If you miss one talk, don't hesitate to join another.  I'll be posting them here, or you can stay tuned even better at the Holy Trinity Apostolate website which is sponsoring the series (check it out in their sidebar, along with other events coming up, including the Lenten Symposium)

I have heard Dr. Fastiggi speak -at the Call to Holiness in 2007 and he is a phenomenal speaker.  He is devout (in the true sense), and explains the faith without ambiguity (well referenced).   In fact, he clears the deck of ambiguity, misunderstandings, and distortions. 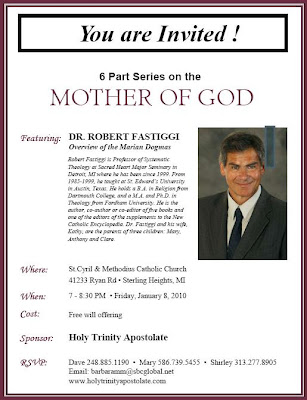 Robert Fastiggi is Professor of Systematic Theology at Sacred Heart Major Seminary in Detroit, MI where he has been since 1999. From 1985-1999, he taught at St. Edward’s University in Austin, Texas. He holds a B.A. in Religion from Dartmouth College, and a M.A. and Ph.D. in Theology from Fordham University. He is the author, co-author or co-editor of five books and one of the editors of the supplements to the New Catholic Encyclopedia. Dr. Fastiggi and his wife, Kathy, are the parents of three children: Mary, Anthony and Clare.

Posted by Diane Korzeniewski at 8:39 PM