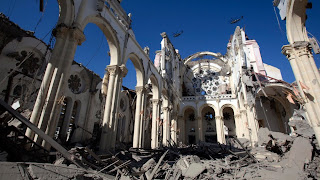 I never gave it any thought before.

Typically, when there is a large scale disaster as the earthquake in Haiti where tens, even hundreds of thousands have died, or will die, is there a plan to meet immediate Sacramental needs - especially the Anointing of the Sick?

Think about it.  Right now there are estimates of 3 million people displaced.  Throughout the city are people who are dying - beneath rubble, and in the streets.  There are people who will die in the coming days due to infection, lack of water, and injuries.

It is good that the Catholic Church has groups like Catholic Relief Services who are on the ground there now and one of many organizations taking donations (please click here to donate now!).

However, would it not make sense for the Catholic Church to have a network of priests who can fly out for immediate, temporary help with the Sacraments?  What if each diocese in the US could send one French speaking priest there in the coming days, how many people who will die regardless, can die having been anointed and perhaps having received the Apostolic Pardon?  Perhaps some religious orders could let priest go for 4 weeks, as well.

For those who are in the streets and are surviving, how much comfort and how many graces would it bring to them to have Holy Mass, even if it is on a makeshift altar out in the open air. Perhaps some are now compelled to a conversion of heart or to have their confession heard.  The sacred hands of a priest can "feed" their souls.

Their main role there would not to be humanitarian workers, but to move among the dying, the injured and trapped and give them this treasure.  It doesn't take away from those who are there for physical work and to meet material needs.  It provides dying and injured Catholics - some of them priests and seminarians, with immediate Sacramental needs.

My thought is that this would be a short term (1-2 month trip, or if there are a number of volunteers from a single diocese, send them in two week shifts).

This would work kind of like a red-cross volunteer - one who might have a regular job, but when natural disasters strike, they are mobilized.  It would inconvenience a diocese to let go of a priest for a short term assignment to provide for immediate Sacramental needs, but sharing always involves some form of sacrifice.

It's just a thought.