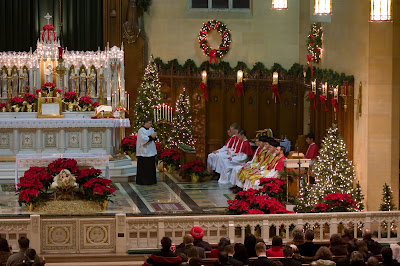 A photo taken at Midnight Mass as the Gloria was well underway in the orchestra Mass. Alexandre Guilmant's 3rd Solemn Mass was conducted by Grotto's pastor, Rev. Eduard Perrone. During longer versions of the Gloria or Credo, the priests will sit - a signal the faithful follow, as well. As you will see below, in the Extraordinary Form, or Traditional Latin Mass, those wearing biretta's will tip them at the name of Jesus.
If you want to catch an orchestra or symphony Mass, there are still two opportunities: The 9:30am Mass on December 28th (Extraordinary Form), and the Noon Mass on Epiphany (Ordinary Form). These Masses will run between 1.5 and 2 hours, so plan accordingly. However, the time flies by very fast. Also, you will want to get there about 30-45 minutes ahead of the Mass (the sooner the better with regards to parking and seating).

This Solemn High Mass in the Extraordinary Form was celebrated by Rev. Wolfgang Seitz, ORC. Rev. Paul Ward and Rev. John Bustamante, both Grotto associates, were Deacon and Subdeacon respectively.

You may wonder why there are no pictures of the orchestra. This has much to do with contractual issues so you won't see many, if at all.

Clicking on any pic will enlarge it, but I have recently discovered some kind of camera problem that is causing a haze or lack of clarity upon enlarging. More on this later. 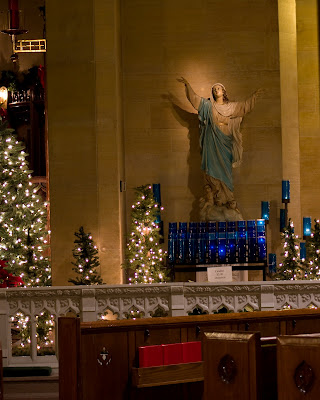 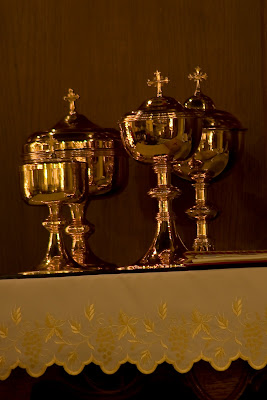 A closeup of the above pic reveals a beautiful, detailed reflection, only hindered somewhat by the camera problem I am currently having. 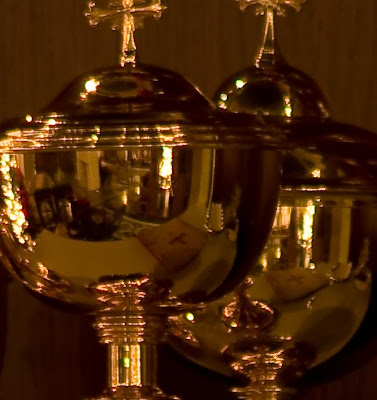 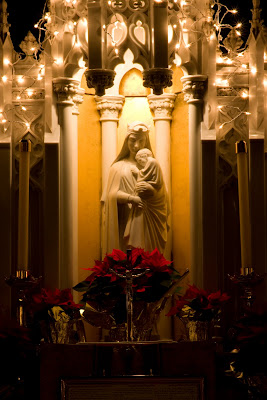 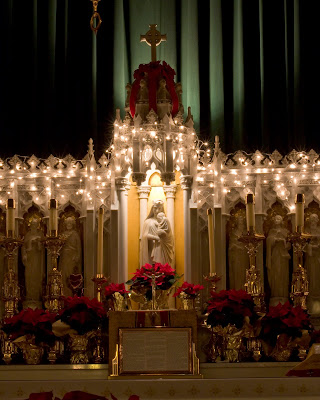 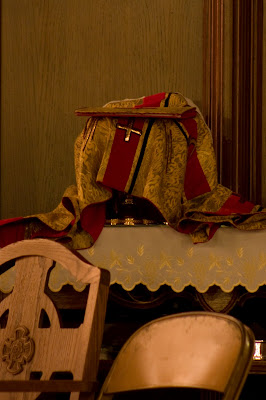 Grotto altar boys will be dressed in the celebratory white cassocks with red shoulder capes throughout the Christmas season. 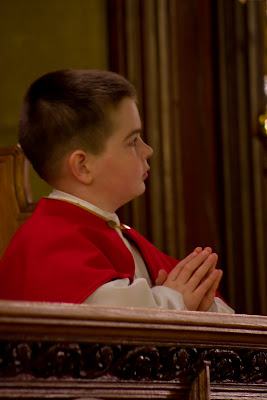 The Infant Jesus is draped, awaiting the blessing of the Creche which takes place before the Mass begins. 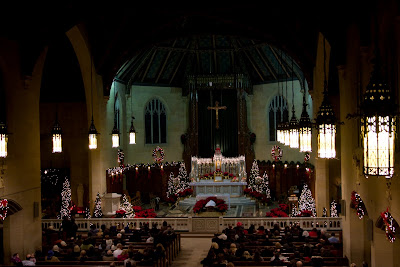 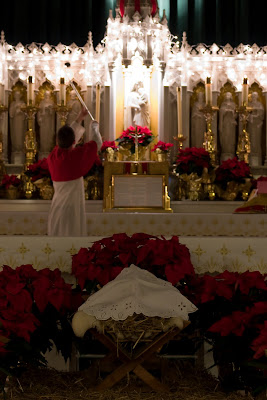 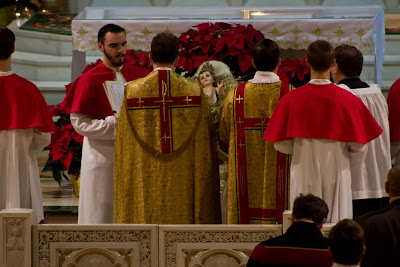 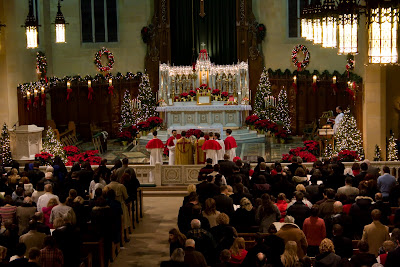 After the blessing took place, all left the Sanctuary and re-emerged moments later in the aisle, ready to process in for the beginning of Mass. 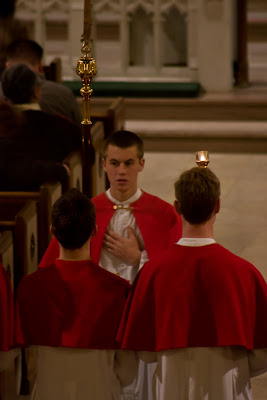 Several of these photos below may look alike. However, if you look carefully, you will notice that the formation of the three priests is different, as well as their position relative to the altar. Each of these things happen at specific points in the liturgy. I hope to come back to it in a future post which is why I am collecting photographs of these things. For example, the first two pics take place during the Confiteor - the first one of the celebrant, and the second part normally done by altar servers. There are times they bow straight forward, and other times they bow toward's each other. Understanding when these things happen during the respective prayers can signal a casual observer to know exactly where we are in the Mass. This is true throughout the Traditional Latin Mass when things like elbow movements can give you a clue as to which prayers are being recited silently. 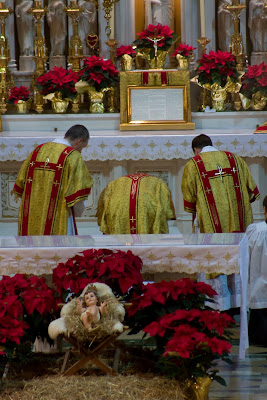 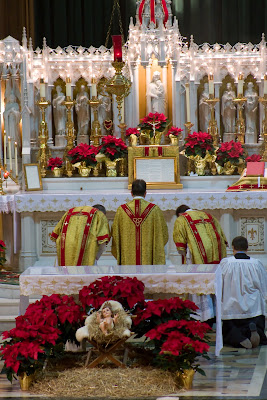 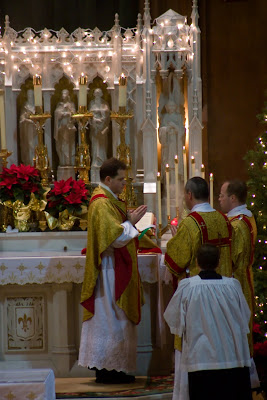 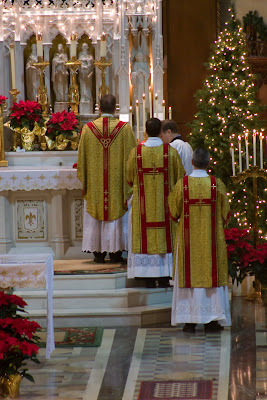 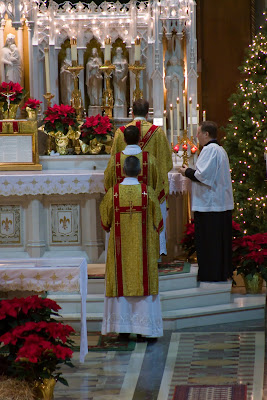 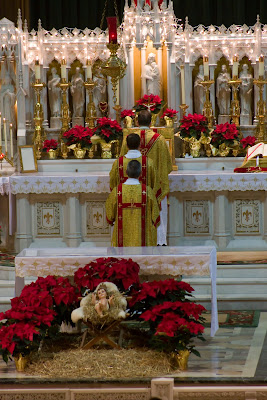 These last two shots were taken during the Gloria, in wihch the celebrant chose to sit after he recited it from start to finish at the altar and awaited the orchestra to finish. It is a good time to sit in quiet meditation. At the name of Jesus, not only do the priests and deacons remove their birettas, but all should bow their heads in reverence for the name of Our Lord. This is exemplified by the altar boys who can often teach us subtle cues with regards to reverence. 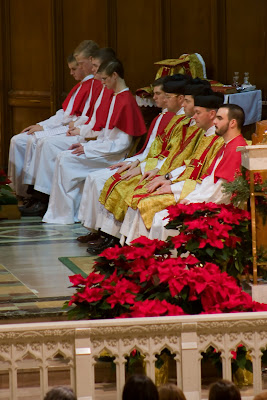 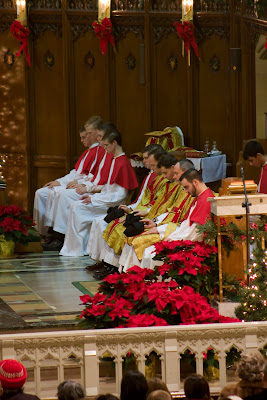 More photos to come, but I need more time to process them.
Te Deum Laudamus! Home