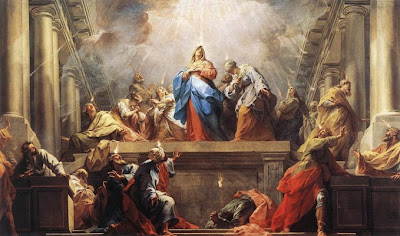 Pentecost is a special day for me because on Pentecost of last year - May 15, 2005, I walked through the doors of Assumption Grotto for the very first time. Three things led me to this parish some of them personal, but I am very glad today that I acted on those graces. It is obvious today just how hard God was working at getting me to go there that day.

One of those three things, which came after the other two, was Fr. Perrone's bulletin article of May 15 in which he wrote about the Fallacy of the Middle Ground. It had been posted on the Assumption Grotto website under the Pastor's section Thursday night when I had found the site. After the first two promptings, I decided to google Assumption Grotto. I had gone to confession for the first time in two years on Divine Mercy Saturday of 2005 - the day Pope John Paul II died, having no idea what Divine Mercy Sunday was. Fr. Perrone's article, by virtue of being used as an examination of conscience, showed me how inadequate that confession was and I yearned to go back. I felt the need for a new confessor - one who could really guide me. I knew after reading his article [below] that there couldn't be a better confessor for me than Fr. Perrone.
He worked so hard at speaking forthrightly, that I felt this was a priest that could use to hear a confession like mine, as much as I needed a priest like him to hear it. After all, I believe that God rewards the fisherman who doesn't concern himself with what the fish think, but just casts his net - a net of admonition aimed at stirring the soul.

His article caused me to "empty my closet" in confession - like the very next day (the poor priest, what a penance for him). It was very apparent that this was one priest who was not going to let me off the hook so easily. I recall telling him that the one thing I did not need was to hear how much God loves me. I've been hearing that all of my life - to my own detriment. Rather, I needed him to teach me how to love God back and it became apparent through his article that it is in following God's commandments that this is done - not partially, but fully. That means taking time to learn about them in detail. It starts by seeking out solid Catholic sermons, some of which are available in my sidebar, and in taking time to read things like the new Compendium.

05-15-05
The ‘fallacy of the middle ground’ occupies my thoughts as I read about the sorry condition of many non-Catholic churches today and as I continue to get depressing reports from other quarters about the state of things Catholic. It seems that many, Catholic and non alike, have sought refuge in an imaginary middle ground between unbelief and wholehearted and complete submission to Christ and His truth. Perhaps you share with me the weariness of hearing of so many things wrongheaded, compromised or simply taken lightly. Are there any out there who believe with all their might that everything the Catholic Church teaches on faith and moral is true, absolutely, without equivocation? And, more, are there souls who have a firm and abiding intention to observe all of moral law, in their thinking, opinions, actions and even secret desires? Does anyone, in other words, aspire to sanctity anymore, or are there left only those who more or less feebly try to avoid only the more gross transgressions of God’s commandments? What I keep hearing and seeing is compromise and platitude among the so-called faithful and outright rebellion and flagrant disobedience from many others. Once in a while I would like to hear something Catholic that is pure, untainted and unflinchingly loyal to the whole truth. Am I perhaps becoming an old crank, a disillusioned malcontent who finds fault with everything? Possibly. What I want, just once in a while, please, is to rejoice unhesitatingly over something and not have to be content to with a half-measured enthusiasm.

Here’s a simple mental self-test that indicates what I’m talking about. Imagine a scale from 0 to 10 in which zero represents unbelief and ten full surrender to the Catholic faith. Think of another such scale in which zero indicates complete lawlessness and ten no admission of moral compromise. Where do you place yourself? What I referred to above as the ‘fallacy of the middle ground’ means that in either scale one can deceive himself into thinking that he might score a 7 or above and yet be ‘safe.’ This is the position of a lot of Catholics nowadays, I fear. In reality, there are only two positions on these scales: 10 and everything else. Our Lord said that either we are with Him or against Him. Saint Paul said that the Spirit and the flesh are opposed to one another and cannot coexist. Saint James’ epistle warns that those who keep the whole of God’s law but fail in a single matter violate the whole of the law.

As so often happens in these accommodating times, there is a confusion of God’s mercy with the toleration of sin, as if to say that He regards a little error or a little evil as not so bad. Spiritual writers used to speak unhesitatingly that God hates falsehood and evildoing. We’ve gotten awfully mushy about God’s mercy while having forgot that He is the Author of truth and of the moral law for Whom duplicity and evil are abominations. Surely you and I need to know that God forgives sin if we are sincerely repentant, but the question is whether or not there is this requisite sincerity. Are we perhaps in danger of fooling ourselves, being content with lives that God judges reprehensible?

I know that utopian ideals are for adolescents. Maybe I am in bad humor today after reading those awful reports. But I need to ask myself those fundamental questions from time to time to see if I am on track. Have you also such a need?

Finally I decided to stop acting presumptuous enough to think all of my "good works" would save me alone. I immersed myself into Grotto culture where I could learn through the many who have, by the grace of God, learned virtue. My new confessor recommended I read the old classic, My Daily Bread, and encouraged time-tested devotions to start. I got a rosary for my penance - the most any priest had ever given me, and it felt right not only because it was a bigger confession than previous ones I'd made, but because the Blessed Mother would help me through the things I wanted to fix the most. The devout life was foreign to me and brought back recollections of my father who was very devout. I had blown off his Catholicism in the 70's when church leaders and "youth ministers" pooh-poohed things like the rosary. Now, I've rediscovered that and more at Grotto and it has all changed my life radically.

Fr. Perrone managed to do exactly what Pope Benedict XVI was explaining to the Austrian Bishops in their 2005 ad limina visit when he said:

Dear Brothers in the Episcopate, you are well aware that there are topics concerning the truth of faith and especially moral doctrine that are not being adequately presented in catechesis and preaching in your Dioceses and that at times, for example, in youth ministry in the parishes or associations, are not being confronted at all or are not being clearly addressed as the Church wishes.

I give thanks to God it is not like this everywhere. However, perhaps those responsible for preaching fear that here and there people might drift away if they spoke too clearly.

Yet experience generally shows that it is precisely the opposite that happens. Be under no illusion. An incomplete Catholic teaching is a contradiction in itself and cannot be fruitful in the long term. The proclamation of the Kingdom of God goes hand in hand with the need for conversion and love that encourages, that knows the way, that teaches an understanding that with God's grace even what seems impossible becomes possible. Only think how the teaching of religion, catechesis at various levels and preaching can be gradually improved, deepened and as it were completed.

Father did not repel me as so many priests and bishops mistakenly think will happen when the fullness of the faith if preached. Rather, he cast a net of admonition and snared me - a true fisherman. Like the loaves of bread and fish which came in abundance out of no where, a priest who preaches the fullness of truth will find many souls. A priest who shields the people from the truth will find only a small catch.

When you can find a solid parish like mine, where priests are very dedicated to the Sacrament of Penance, encouraging frequent confession even when no mortal sin is present, take advantage and go often. Talk about those things you know you need to be doing or not doing to which you are resistant. There's no finer counselor, coach or psychiatrist, than a solid Catholic priest in a confessional. In the end, we learn that happiness comes from making God-pleasing changes in ourselves.

May the Holy Spirit touch you all this day!

EDIT 1:55pm: Go see some pics Fr. Z has on his blog in Pentecost at the Pantheon: rose petals falling through the oculus


Only the free can choose obedience to Magisterial teachings. The obedient are not held captive by Holy Mother Church; rather, it is the disobedient who are held captive by the world!.
Posted by Diane Korzeniewski at 6:15 AM