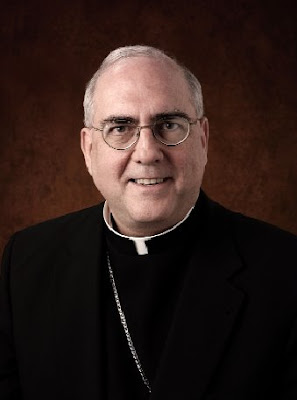 NOTE: This post has been updated with links to some excellent commentaries (scroll to the bottom).

Archbishop Joseph F. Naumann of the Archdiocese of Kansas City, Kansas has publicy notified a politician in the diocesan newspaper that she should not present herself for holy Communion due to her public pro-choice position and voting.

In his weekly column in The Leaven, Abp Naumann said (emphasis mine in bold, comments in red, and extra emphasis in blue):

On the day of my return (Monday, April 21) from the exhilarating experience of participating in Pope Benedict’s pastoral visit to the United States, I learned that Governor Kathleen Sebelius had vetoed the Comprehensive Abortion Reform Act (HS SB 389), which had been passed by significant majorities in both chambers of the Kansas Legislature. Last week, an attempt to override the governor’s veto failed in the Senate by two votes.

Governor Sebelius in her veto message claimed: “For years, the people of Kansas have asked their elected officials to move beyond legislative debates on issues like abortion.” From her veto message, I received the impression the governor considered it a waste of the Legislature’s time to pass a statute that attempts to protect some women by making certain they have the opportunity to be well-informed: 1) about the development of their unborn child; and 2) about abortion alternatives available to them. Evidently, the governor does not approve of legislators devoting energy to protecting children and women by making it possible to enforce existing Kansas laws regulating late-term abortions.

The governor’s veto message demonstrated a lack of respect to the members of the Kansas General Assembly who had carefully crafted and resoundingly passed the Comprehensive Abortion Reform Act, as well as to the many Kansans who find it more than an embarrassment, in no small part due to several previous vetoes by Governor Sebelius of earlier legislative efforts to regulate abortion clinics, that Kansas has become infamous for being the late-term abortion center for the Midwest.

What makes the governor’s rhetoric and actions even more troubling has been her acceptance of campaign contributions from Wichita’s Dr. George Tiller [oy vey! the butcher of butchers], perhaps the most notorious late-term abortionist in the nation. In addition to Dr. Tiller’s direct donations to her campaign, the governor has benefited from the Political Action Committees funded by Dr. Tiller to support pro-abortion candidates in Kansas.

However, the governor overreaches by assuming credit for declining abortion rates in Kansas. Actually, lower abortion rates are part of a national trend. Our neighboring state of Missouri has actually had a steeper and longer decline in its abortion rate.

Governor Sebelius’ inclusion of public school sex education programs as a factor in the abortion rate decline is absurd. Actually, valueless sex education programs in public schools have been around for years, coinciding with increased sexual activity among adolescents, as well as increases in teen pregnancy and abortion. On the other hand, the governor does not acknowledge the significant impact of mass media education programs, such as those sponsored by the Vitae Caring Foundation, or the remarkable practical assistance provided by Crisis Pregnancy Centers which are funded through the generosity of pro-life Kansans.

What makes the governor’s actions and advocacy for legalized abortion, throughout her public career, even more painful for me is that she is Catholic. Sadly, Governor Sebelius is not unique in being a Catholic politician supporting legalized abortion.

Since becoming archbishop, I have met with Governor Sebelius several times over many months to discuss with her the grave spiritual and moral consequences of her public actions by which she has cooperated in the procurement of abortions performed in Kansas. My concern has been, as a pastor, both for the spiritual well-being of the governor but also for those who have been misled (scandalized) by her very public support for legalized abortion.

It has been my hope that through this dialogue the governor would come to understand her obligation: 1) to take the difficult political step, but necessary moral step, of repudiating her past actions in support of legalized abortion; and 2) in the future would use her exceptional leadership abilities to develop public policies extending the maximum legal protection possible to the unborn children of Kansas.

Having made every effort to inform and to persuade Governor Sebelius and after consultation with Bishop Ron Gilmore (Dodge City), Bishop Paul Coakley (Salina) and Bishop Michael Jackels (Wichita), I wrote the governor last August requesting that she refrain from presenting herself for reception of the Eucharist until she had acknowledged the error of her past positions, made a worthy sacramental confession and taken the necessary steps for amendment of her life which would include a public repudiation of her previous efforts and actions in support of laws and policies sanctioning abortion.

Recently, it came to my attention that the governor had received holy Communion at one of our parishes. I have written to her again, asking her to respect my previous request and not require from me any additional pastoral actions.

The governor has spoken to me on more than one occasion about her obligation to uphold state and federal laws and court decisions. I have asked her to show a similar sense of obligation to honor divine law [BINGO!] and the laws , teaching and legitimate authority within the church.

I have not made lightly this request of Governor Sebelius, but only after much prayer and reflection. The spiritually lethal message, communicated by our governor, as well as many other high profile Catholics in public life, has been in effect: “The church’s teaching on abortion is optional!”

I reissue my request of the faithful of the archdiocese to pray for Governor Sebelius. I hope that my request of the governor, not to present herself for holy Communion, will provoke her to reconsider the serious spiritual and moral consequences of her past and present actions. At the same time, I pray this pastoral action on my part will help alert other Catholics to the moral gravity of participating in and/or cooperating with the performance of abortions.

Ed Peters, JD, JCD has weighed in on this subject in his blog, In Light of the Law....

Fr. Z has a commentary up on this... he emboldens this paragraph, then comments [bracketed in red]......:

Naumann said he wrote to Sebelius in August, asking her to refrain from Communion but learned recently that she’d participated in the sacrament. He said it prompted him to write her again, asking her to respect his request and “not require from me any additional pastoral actions.” [Folks, what this means is that if she continues, the Archbishop will apply some kind of censure to her, which might include excommunication.]

Only the free can choose obedience to Magisterial teachings. The obedient are not held captive by Holy Mother Church; rather, it is the disobedient who are held captive by the world!
Posted by Diane Korzeniewski at 10:15 AM