Shhhhh........The Secret to Quiet and Still Children at Mass 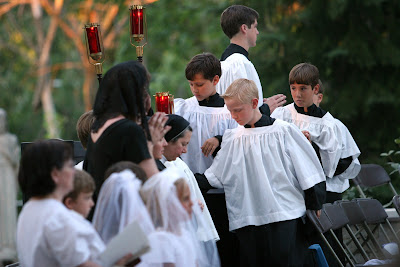 I found Grotto's young children to be among the most well-behaved at Mass
What is the secret?
Photo taken during Assumption Day 7:00pm Mass by Jeff Williams (2006)
See details here for 2007 Assumption Day at Assumption Grotto

Ok, don't let the little ones know about this......Shhhhhh

Perhaps when you have visited a more traditional Catholic parish, you notice that there are big families with well-behaved kids (and parents hardly break a sweat). Then, you reflect on what you see in the majority of Catholic parishes - some families can't seem to keep one child in control without toys, food, and lots of chasing (and lots of sweating). By the time Mass ends, mom and dad need a nap. What gives?

I couldn't help but feel for a young mom - Jennifer - who admits to bringing the Cheerio's to Mass (at the advice of priests among others) in order to help keep the child quiet. As I read her comment and the response others had to it, I realized that many moms (and dads) today, don't know the secret - a secret I learned through the grace of God by observation soon after discovering Assumption Grotto in 2005.

There are exceptions to what I am about to share with you and I will admit that the Noon Mass at Grotto has a little more kid-noise than the 9:30 and perhaps it is because there are more families with kids at the later Mass. My observations came from the 9:30am Latin Novus ordo.

Here is what I wrote in the comment box in a blogpost by Fr. Z.

It’s unfortunate that there have not been good examples to learn from, and solid advice passed on as to how to handle small children in church.

Perhaps this may help you and others, but I concede it must begin from infancy. I learned it by observing some families in my parish where there are many large families (6+ kids and many with 8-10+). I marveled at how still and quiet the small ones were during Mass (there are exceptions, but there is a trick I discovered).

One day at the 9:30am Mass a young woman was holding a baby (6-8 months old) in her arms during the prayers of the faithful. She had her head down and the baby was getting a little active, touching the face of the woman. My eyes caught the action because it was in front of me. After several times of trying to get attention, the baby stopped and seemed to be content just to sit there and look around. I suddenly realized that I was witnessing something very significant: Many families at Assumption Grotto send a clear message to their children from a very young age: This is God’s time, not yours sweet one. It’s a gentle message, but one that works when used early.

If you give a baby attention in any way during Mass, barring something very serious needing your attention, the baby will demand more and not be able to sit still.

I then looked around the church and saw in the back several parents walking with their babies. None of them were paying attention to the babies. They were either focused on the altar, or had their heads down in prayer. I kept looking around a few more times and noticed the pattern.

The following week, I was right behind another family of four with two children around 3.5 and 5. The little one kept standing on the kneeler and turning around at me. The father very gently turned the little girl and pointed to the altar. This was repeated 3 more times before the little girl seemed to give up. At no time did dad show anger or impatience. I think he would have done it 100 more times if need be.

By the time these children reach 5, 6, 7, they have no problem getting through a 1.5 hour Latin Novus Ordo without cheerios, PS2’s, iPods, trucks, dolls or other such things.

Once again, there are exceptions at Assumption Grotto. IMHO, those who do as described here were the experts. No one will convince me that a mom and dad of 10 quiet kids in a pew is wrong about not giving them attention during Mass. If the parents do so, they have taken their attention off of God who should be at the center of Mass, while enabling their kids to do the same.

Don’t feel bad though – no one has talked about this or taught it so how could you know? Hopefully, it catches on. It’s the same principle used by the TV nannies in getting the kids to go to bed on time without hastle.

Bottom line: The more attention you give them, the more they will want. The more I think about how I handled my own nieces and nephews at such times, I must admit that the cheerios and toys were simply ways to lessen my work. Look at the example of the patient father with the 3.5 year old. It took work - far more work - and patience - than simply handing the child a toy or something to eat.

I should add that I don't think it is impossible to teach a toddler these things that should begin in infancy. Feed the child well before Mass. During Mass, sit somewhere that the child can see follow the examples given here. If a loud temper tantrum ensues, don't give up - perhaps whisper in his or her ear that Jesus really needs someone to love Him at the moment and he is lonely for us to give Him our attention. Lead by example because if you are distracted during Mass, then so will the child.

If you have a newborn or are expecting, do try to do this from very young.

OTHER BAD INFLUENCES
Another thing I noticed is that grandparents and family members can be terribly bad influences because they like to smile and make goo-goo faces throughout the Mass. I know, I use to do it to everyone else's children. Whatever you do, don't go to a parish like Assumption Grotto or other more traditional parishes where the secret is in execution and make goo-goo faces at someone else's child. You may break the very good thing those parents are trying to teach: This is not your time, it is God's time. Parents: don't hesitate to talk to family members and let them in on the strategy to not give the children attention during Mass, even with a glance.

OLDER CHILDREN
It's a trick we've all used at one time in our life: The restroom trick. God help us if parents fall for this, unless the child has medical problems that are known. Ensure your kids go to the restroom before Mass and tell them that they need to give God the full hour. It is my understanding that at Grotto the altar boys must be able to "hold it" through Mass, barring illness of course. If they aren't capable of holding it, they won't be serving. If in doubt, watch your child at play and see how long he or she goes without a restroom break. I've witnessed children play for hours after drinking a half-pitcher of coolaid until their eyes and ears are watering. Of course, it also helps to not allow such a child to drink a bottle of Coke 30 minutes before Mass.

I hope this works for someone. Give us some feedback with how it works if you are going to try it or are already an expert at it. What works, what doesn't work?

BTW - thanks to Deacon Greg Kandra for starting this discussion with his post on "Bulletin announcements I would like to see...." You can always get to the Deacon's blog via my sidebar section for Blogging Priests, Religious, & Deacons.

Posted by Diane Korzeniewski at 7:44 PM