Imagine: A Church so Silent Before Mass it is Deafening 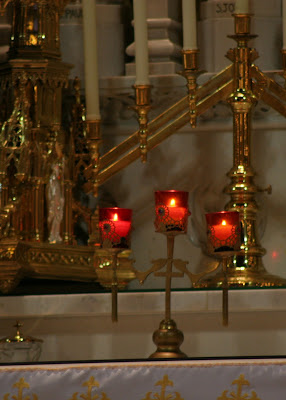 "The silence before Mass at Assumption Grotto Church is deafening!"

That is what I told reporter Bob Delaney of the Michigan Catholic who wrote a nice piece about Assumption Grotto's 175th Anniversary, and our upcoming Assumption Day feast.

The article is in this past weekend's Michigan Catholic, and it can be read online. Bob also talks about the Te Deum blog in the article. If the link to the article becomes broken, email me at TeDeumBlog@aol.com and I will fix it.

In the half hour before Mass, and after, it is not uncommon in this era for a church to have decibels rivaling what you can encounter at any mall on Saturday afternoon. Well, perhaps the "after" may only last about 5 minutes because half the church likely emptied out mid-Communion as people tripped over each other to get out the door and to the local diner, the store, back home to a sporting event on TV or other such things. I should know, I was one of those people not long ago and I'm guilty of having left early for every one of those things, and more before I found Grotto. This is one parish where time seems to stand still and if one is in the right disposition, worldly thoughts fade in the background and the desire to rush out is replaced with a desire for the Mass to never end.

This phenomena gives new meaning to "Mass exodus." I've seen many a priest attempt to change it all the way back to the 70's. However, it just seems to fall on deaf ears right along with the message to not to come to Mass in shorts or half-exposed in such a way as to not lead others into temptation. The tops some people of my gender wear would likely challenge a saint to not fall into lustful thoughts while trying to worship!

Forgive them Father, for they know not what they do. Such is the attitude we should take because it is amazing how many people truly don't "see" how their dress or behavior affects others. I spent serious time being angry about these things without thinking that it took me 40 years to learn the value of saving shorts for workouts and saving conversation for the church hall after Mass.

Bob chuckled at the oxymoron. It does sound funny and I laughed too. How can silence be deafening? I had to think about that for a time and came to this conclusion.

Maintaining silence while in church is deafening in that we learn to deaden the senses - those things that are constantly self-seeking and craving attention. Talking in church is defended by some as being charitable to neighbor. What is missing is charity toward's God in what little time is spent in church. If our neighbor is slighted because we are not speaking to them in God's house, then perhaps the problem is with the neighbor's desire for attention while in the presence of our Eucharistic Lord. By engaging in "charitable discussion" with them, we enable them in their lack of virtue in this regard. The more charitable path is to encourage them to spend time conversing with God in his own language - the language of silence.

Hence, when we enter church before Mass we are hopefully getting there early to spend time with God. The priests at Grotto are always reminding us that we should spend 10-15 minutes following Mass in thanksgiving, as well. Here too, those who cannot stay, should exit the church silently and speak outside so that those who remain in prayer are not distracted.

Fr. William Wagner, ORC writes this in the article, "The Practice of Silence and Solitutde". While it is in the context of a religious community, it is very much applicable to a parish community before and after Mass in the church.

Silence, therefore, has always been highly regarded by the saints and holy people. Once Mother Teresa was asked, "Mother what do you consider the most important thing in the training of your sisters?" And she answered, "Silence. Interior and exterior silence. Silence is essential in a religious house. The silence of humility, of charity, the silence of the eyes, of the ears, of the tongue. There is no life of prayer without silence." And then at another time she expanded on her philosophy of silence. She explained that "we need to find God, and he cannot be found in noise and restlessness. See how nature, the trees, the flowers and the grass grow in perfect silence." Finally, she added that without doubt "God is the friend of silence. His language is silence. And he requires us to be silent to discover him. We need, therefore, silence to be alone with God, to speak to him, to listen to him and to ponder his words deep in our hearts. We need to be alone with God in silence to be renewed and to be transformed. For silence can give us a new outlook on life. In it we are filled with the grace of God, which makes us do all things with joy."

Posted by Diane Korzeniewski at 4:55 AM