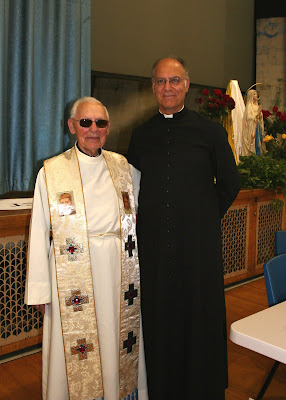 August 13th marked the 90th anniversary of the 4th apparition of Fatima. It just so happens that a local, 90 year old priest would be there to share the day with us.

Those were the words repeated often by Fr. Val during his visit to Assumption Grotto last night. But, when this priest says God loves you, it is not only a message of mercy, but one in which he gently admonishes us to love God back.

I have already been aware of Fr. Val Rykowski's popularity among Grotto people, parishioners of nearby Sts Cyril & Methodius in Sterling Heights where he is in residence, and Catholics from other parishes in southeast Michigan. However, I have something else to gauge it by: Requests for photos and video of the day. Unfortunately, there are few photos, but I am hoping some others who took pictures can supply me with a few to share with you. I should also be able to get some pics from the video itself, but the quality may not be there.

I only got a few shots off because I was busy doing something else: Shooting video of the day for Grotto archives. Seeing the video camera rolling throughout the evening - with Father's permission - brought a number of requests for a copy of the video. Knowing how well-loved Fr. Val is, I will do my best to work out a way for those interested to get a copy of the DVD at Grotto and Sts. Cyril & Methodius. It will take me some time to get it transferred and edited - something I am still learning how to do. There are many amateur mistakes, but I know that everyone is less interested in the clamshell than the pearl within the clam. I also want the final version approved by Grotto's pastor, and Fr. Val.

I had many people asking if I would be there for the August 13, 2007 Fatima Devotions to photograph because, "Fr. Val is coming". Father has had plenty of time for people to become attached to him. He is 90 years young. Let me tell you that this gentle priest did the whole nine yards last night.

He arrived around 6:15, accompanied by Fr. Marek - the new, young Associate Pastor of Sts. Cyril & Methodius. In a move classic to Fr. Val, after he partially vested for Mass and did his pre-Mass devotions, he heard confessions.

PASSIONATE DEPTH IN CELEBRATION OF THE MASS

I just have to empahsize some of my own text in bold here because it is a most important topic.

Father was the main celebrant for last evening's Mass, which he celebrated using the posture all too familiar to Grotto-goers: ad orientem at the wall altar. We were graced with a sermon, as well. For those who have never assisted at Mass celebrated by Fr. Val, all I can say is do it at least once. I have never been able to not cry when he celebrates, and last night was no exception even though I could not see his face, which is so often flowing with tears of pure love during Consecration. The love this priest has for the Eucharist just radiates in such a way as to give witness to the reality of the Sacrifice taking place during the Mass. In the past, I have encouraged seminarians and priests to experience his celebration of the Mass and I urge this again while there is time to witness it.

All I can say is that if you must celebrate the Mass facing the people, you want to learn from Fr. Val how Vatican II intended for it to be done. In my humble opinion, a video of him during the Consecration would be most beneficial from a training perspective. In contrast to what "expert liturgists" have been teaching priests-in-formation for decades, Fr. Val does not look at the people during Consecration. He looks at the Body and Blood of Our Lord Jesus Christ, thus teaching us it is where our focus should be. His speech is slow and with a depth that conveys the passion with which he celebrates. This is a priest who does not follow some kind of presentation-skill guidelines during the Mass to keep our attention. He is too busy celebrating the Sacrifice of the Mass to be bothered with it. This is also a trait I have noticed among many more liturigcally traditional and doctrinally orthodox priests. Those who have experienced it know that Fr. Val is in another dimension altogether when he celebrates.

Teresa Tomeo once referred to Fr. Val as the Archdiocese of Detroit's version of the Energizer Bunny. I would say he was exceptionally energized for this event. Then again, all that is needed to get Father fired up is an opportunity to spread devotion to the Holy Eucharist, the Holy Trinity, and the Blessed Mother - in particular, Our Lady of Fatima. 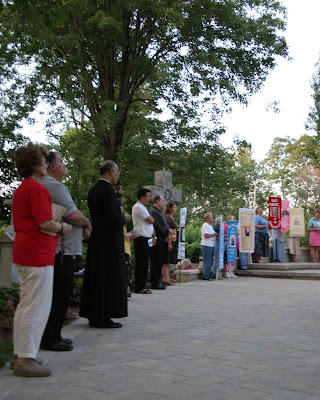 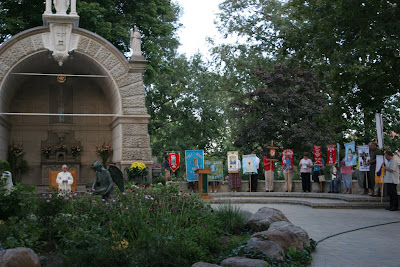 Fr. Val prays along in front of the grotto as others are seen in the background with more banners used in the procession. The children put on a skit right behind where Father is standing, in the sanctuary.

Following Mass, Fr. Val joined in the procession to the grotto out behind the church - not a short walk. We later learned his sister had come also and she too came out to the grotto as we prayed the Rosary, led by Fr. Perrone. Then, children put on a skit in the grotto area to teach us the message given to the children of Fatima 90 years ago on August 13th, 1917. Unfortunately, none of the pics I took of the children came out. I had the video camera on the tripod and it was getting too dark to get a clear shot without flash and without having it mounted.

As if all of this wasn't enough, Fr. Val joyfully exited the Grotto around 8:30, then came over to the school gym for refreshments, then gave about a 25-30 minute talk. All I can say is that the talk was......classic Fr. Val.

Below you see a couple of pics taken during Father's talk. I always recognize when Fr. Val is present at any liturgical event in metro Detroit by the most beautiful stole that he wears, seen here as he points to Our Lady. Click on the pics to enlarge.

September 13, 2007 speaker: Fr. Eduard Perrone. Please join us with your children so that they may learn about Fatima.

Te Deum Laudamus! Home
Posted by Diane Korzeniewski at 6:25 AM