Whose Church is this anyway?

This is last Sunday's sermon by Fr. Eduard Perrone, pastor of Assumption Grotto. It was classicly "Perronesque". It was also just the kind of message Catholics need to hear from the pulpit today where bad theology has left many disoriented. Only a humble heart can handle sermons like this one.

My pastor speaks with simplicity on a subject which many will turn upside down with the complexity of relativism. Complexity serves as a tool of the Evil One, who uses it skillfully to lead God's faithful into confusion, or into complacency. Morality can be explained away with all of the grace of a used-car salesman in mid-town Manhattan. God loves his children too much to make truth into some kind of maze that only the highly educated can navigate.

Truth is simple, not complex. It is black or white, and never shades of gray. Our Lord did not say the path was broad and easy. He said it was narrow and difficult.

"But Israel I would feed with the finest wheat, satisfy them with honey from the rock." (Ps 81:17) 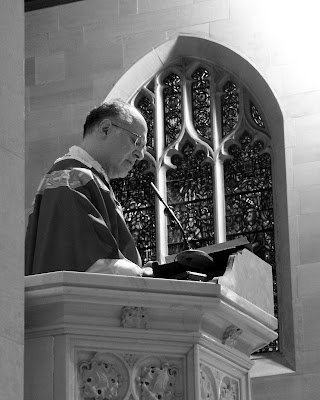 The bible readings given us for today compel us to talk about the mysterious thing we call the Catholic Church. We so often say it flippantly, casually, ‘the Church,’ as if it were some social organization or corporation, that we may forget that Jesus only spoke of “my Church”, that is, Christ’s Church, God’s Church–not our thing but His. And, if it’s His it’s holy; if it’s Christ’s it’s true; if it’s God’s its definitive, unerring, permanent and unconquerable. The difference between thinking of the Church as a human thing and a divine thing comes to the fore whenever we talk about the things the Church officially teaches and the rules of conduct it makes. If they’re God’s rules, there’s no appeal for their change: they’re permanent and binding. If they’re man’s, they’re provisional, changeable and–yes–negligible. Maybe you can already see where we’re headed. The logic of the matter is compelling. If the Roman Catholic Church speaks and teaches what is God’s mind for us to know, then we’re obliged in obedience to it in the strictest sense. And why? Because there is no reality beyond reality; what God made is the only way things are; what He says and does is ‘all-there-is’. If there were an alternative to reality, it would be deception or illusion–not reality at all, but make-believe, a pretending that ‘what-is’ isn’t really so.

The motivation for these remarks comes from the first reading for this Mass which contains the very first decree from a council of the Church. The apostles, after the Holy Spirit had guided their deliberation and discussion, came to their conclusions. I want you to hear again what the apostles—the only ones Jesus chose as His official agents—said in their first decree. Note the authoritative and confident manner of their words: “It is the decree of the Holy Spirit, and of us...” Now, only three kinds of persons can say something like that: lunatics who think they have divine powers; believers who are deceived by their pride into thinking that God has spoken to them, when He in fact hasn’t; and men who were guaranteed by Jesus Christ to have privileged access to truth, to the mind of God. Such men are the apostles and their successors. Here is what Jesus said to them in the Gospel just read to you: “The Holy Spirit will teach you [apostles] everything and remind you of all that I told you.”

When the Catholic ‘apostolic’ Church teaches and speaks officially (that means Peter the Pope and his fellow apostle-bishops), you are obliged by their words. They’re not suggesting; they’re not proposing something for debate; they’re conveying to you the mind of God.

You know that there are people who say that it is OK for the Church to talk about God, the creed, the sacraments and prayer—no problem there, but that when she talks about morality, she’s overstepped her bounds, or, more bluntly, is simply wrong. Let’s see if that’s right. Here’s a good trivia question for you. The very first time that the Church made an official statement that was binding on all Christians: did it have to do with a matter of faith or with moral conduct? The correct answer is given in the first Reading: Christians were forbidden certain actions: idolatry and “unlawful marriage.” How interesting! The apostles’ first concern was not to clarify a teaching about the divinity of Christ, or the Blessed Trinity, or the Eucharist; it was rather about the moral issues of occult practices and impurity—two huge concerns also for us in the modern world. Should we then be surprised that the Church even today speaks out forcefully in forbidding divorce and remarriage, contraception, abortion, homosexual acts, porn, euthanasia, the redefinition of marriage, and all the weird manner of occultism which has surfaced in our day?

I conclude this segment of my sermon with a summary of what’s been said thus far: If you believe in Christ, you must believe that His apostles have privileged access to the Holy Spirit so that when they speak about morals you are obligated to agree with them and further obligated to follow them in your conduct. In this way, the Catholic Church keeps you centered in reality and not in a counterfeit, let’s- pretend kind of world.

I must pass on to First Holy Communion–briefly. Our children won’t get much of what I just said. Parents have the God-given duty to teach them what’s right and to protect them from corruption. Holy Communion, for the pure of heart, is like a protective medicine against contagion, and an anodyne that gives relief and comfort to troubled souls. It needs to be taken over and over again–but always in a state of grace—for it to be fully effective. Holy Communion is Jesus Himself, but in the form of the Host: God in a size small enough to be taken in by the fragile bodies and innocent souls of these little children. Parents: feed your children with frequent Communion as long as they are not in mortal sin (for that, there is needed prior confession). Teach them and guide them in the Catholic faith; nourish them and innoculate against evil with the food of Holy Communion.

My parting word is on the Blessed Mother. While I’m pleased to say ‘Happy Mothers Day’ to our moms and to thank them for being pro-life, I must also say thank you to the Blessed Mother who gave us Jesus as the world’s only hope for salvation. We will honor Her after Mass in the crowning of Her image outdoors. 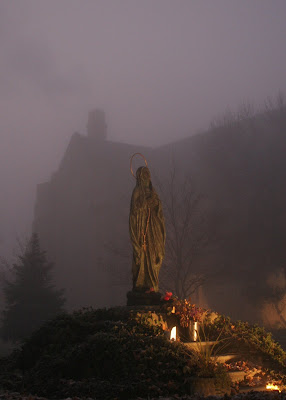 A scene from my blogpost
"Grotto in the Mist"

Thoughts? Comments? What say you!

For more of Father Perrone classics, visit the section in my sidebar - under the photo post collections near the top - dedicated to specific sermons.

Also, the webmaster of the Assumption Grotto website has even more sermons from throughout the last few years with a variety of themes.

Posted by Diane Korzeniewski at 9:08 AM