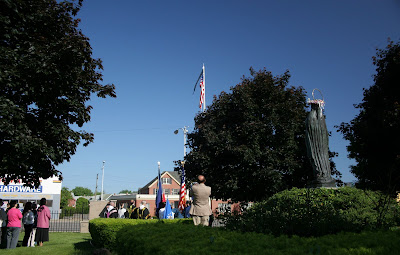 The flag is raised to the top, then is brought down to half-staff as the bugeler plays

We get all excited with the prospect of a long weekend, but I for one had never thought to go to Mass on Memorial Day. In fact, the only thing on my mind was the extra day to sleep in, the BBQ and picnic, and other things.

Assumption Grotto's culture has a way of helping us to get our priorities straight on these things. I was at Mass which followed the 9:00 flag-raising. During Mass my thoughts went to an uncle who was killed during WWII, long before my mother and father even met. He was killed in action on May 24, 1944. He was a TSgt with the 741st Bomber Squadron, 455th Bomber Group (Heavy). He was awarded an Air Medal with 4 Oak Leaf Clusters, and a Purple Heart. His plane went down just off the shore of Italy and he was not recovered. His name appears on the "Tablet of the Missing" in Florence, Italy.

I then began to reflect on Memorial Day. As a Catholic, I believe in purgatory - a place where souls reside as they undergo purification before joining our Lord in Heaven. The poor souls in purgatory depend on our prayers and yet, you have to wonder, how many poor souls are actually being prayed for? Such talk is rarely heard from pulpits these days. As a matter of fact, you could get the impression that there is no need to pray for anybody in some Catholic circles because "everyone is going to heaven".

If you had the day off and didn't go to Mass, please consider it every Memorial Day from now on. If you don't know anyone who died during a war or in the service of their country, then go for the sake of the many poor souls who have no one to pray for them. If you are out of town on vacation, find a local Catholic Church and go. If that doesn't work, at least say a Rosary or some other meaningful prayer.

Here are more photos from today. Note the black vestments in use. I never seen these until I came to Assumption Grotto. The first time was on All Souls Day in November. Grotto uses black vestments for funerals, as well. Some would argue that white reminds us more of the joy and hope of Resurrection, and the after-life. However, I will go back to my discussion of purgatory. These vestments remind me of the need to pray for those who have gone on to the next life, rather than to assume they are all in heaven. Hence, it is not just a color of mourning in my mind.

Some of these came out rather dark, but you get the idea of how the morning went. The Mass was not held outdoors as we had thought. This would have required an army of volunteers setting up chairs and it rained all weekend long. 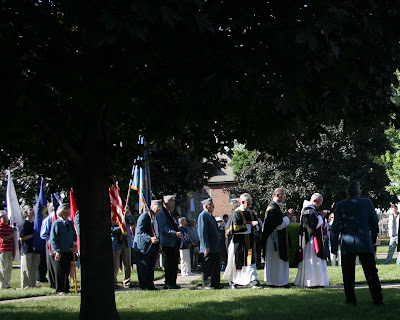 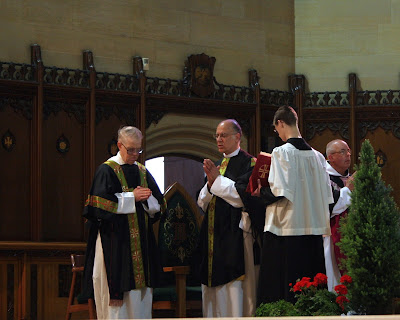 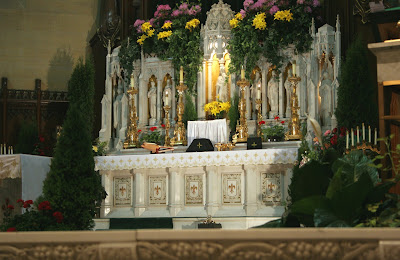 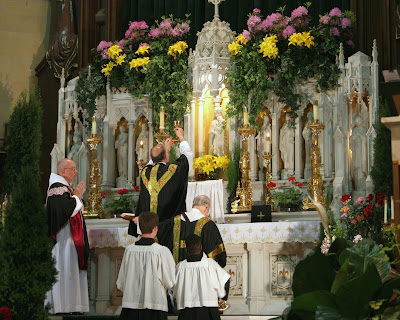 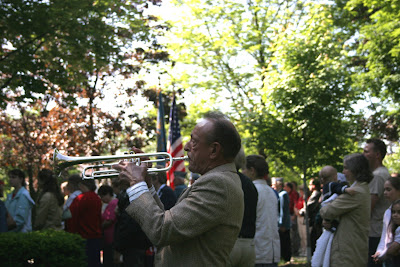 Some of those gentlemen you see firing are around the age of 90. It was a pleasure to sit and talk to some of these old-timers today, and to hear their stories. I hope next year to see a bigger crowd of young and old alike.

As a side note, an interesting site to visit is the American Battle Monuments Commission, where you can search databases with names of your loved ones. It does not cover the Vietnam war or anything after the Korean War from what I can tell. It is government run so perhaps there is a separate set of databases for Wars following the Korean War.

I had no idea, nor did my uncle's only living brother, that we could find out where he was buried, or listed. I used the FAQ page about two years ago and sent an email inquiry. A few weeks later, I received a letter and a packet from the Commission with my uncle's information - his service number, his medals, the date he was killed, and where he was buried. It is not known if he was simply not recovered, or if he was recovered, then buried at sea. I then had the option - free of charge to get several photographs of the plot/tablet listing of my uncle and I followed through. A few months later I got these large poster-sized pictures which I gave to my brother, sister and uncle. He regretted not knowing his brother was listed on the Tablet of the Missing in Florence, Italy because he had traveled to that area many times over the years. For this reason, I pass the info along to you. You must be a relative to request information, but not necessarily the listed next of kin.