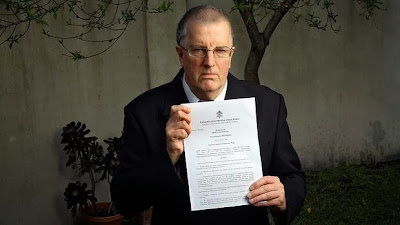 Cardinal Pell recently said Pope Francis' popularity with the press was, "too good to last."  That may come sooner than we all thought.  This may send shock waves through the secular media and the dissenting wing of the Church who still don't understand Pope Francis, or that mercy and charity often involve discipline.

From The Age in Australia: (Edit - this is quoted text and I'm sure part of it is in error, in particular, when it suggests he was as disciplined for support for 'gays.'" One doesn't get disciplined for supporting people with SSA but that support does not include affirming people in engaging in any sexual activity outside the context of Sacramental Marriage. Google the Courage Apostolate to see how the Catholic Church supports people with SSA. I hope we will see a statement out of the Archdiocese of Melbourne, which I will share)


Dissident priest Greg Reynolds has been both defrocked and excommunicated over his support for women priests and gays - the first person ever excommunicated in Melbourne, he believes.


The order comes direct from the Vatican, not at the request of Melbourne Archbishop Denis Hart, and apparently follows a secret denunciation in the best traditions of the inquisition, according to Father Reynolds.


The excommunication document - written in Latin and giving no reason - was dated May 31, meaning it comes under the authority of Pope Francis who made headlines on Thursday calling for a less rule-obsessed church.


Father Reynolds, who resigned as a parish priest in 2011 and last year founded Inclusive Catholics, said he had expected to be laicised (defrocked), but not excommunicated. But it would make no difference to his ministry.

One of the purposes of excommunication is medicinal. It's a way for the Church to say that someone has strayed too  far and is endangering their souls and the souls of others.  Some do reconcile with the Church after the sting of excommunication, when they humble themselves.

The Church does not have the authority to change Scripture or Tradition.  What he is pushing is out of harmony with both.

Don't just gawk at this situation, pray for him.

May the Blessed Virgin Mary and the guardian angel of Mr. Reynolds, enlighten his mind and soften his heart so that he will reconcile with the Catholic Church.

Note: The recommended links below are automatically generated by the tool, so they are not necessarily related content.
Posted by Diane Korzeniewski at 8:23 AM