Catholic Virtual Wars 08: Giving context to use of the sword in defending the faith 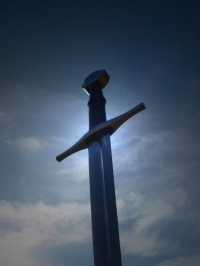 I may seem redundant on certain points in my Catholic Virtual War series (click and scroll for all posts in the series).  One point, is the face we put on the Catholic faith for others to see, especially others who may be looking closer at Catholicism, and those whose faith may be weak and shaken. People's faith can be shaken by error, as those of us who were subject to shoddy catechesis of the past 50 years know too well.  But people's faith can be shaken by the less than virtuous acts of others when they are subject to a trail of discontent, complaint, and focus on scandals.

As the old saying goes, the Church is not a museum for saints, but a hospital for sinners.  So, those sinners can come in many forms, from those who embrace certain heresies to those who defend the faith with utter contempt for others.

After learning that a particular blog, known for it's corrosive comment box, shut down comments, I posted something on Facebook in a comment that I want to share. It was the basis for this post.  Some minor grammatical corrections were made.  I'm also adding some white space:

I learned the "lesson of the sword" not long after starting my blog, and continue to get burned when I forget about it.

We often use the sword to defend Jesus by cutting off the ear of others who don't understand, or are so deep into error they can't be won by any other means than by prayer and reason. That's the pitiful part about Catholics who set out to teach other Catholics just how "bad" things are by mocking others in error and giving rise to sometimes objectively grave contempt for others.

When did you ever see Pope Benedict mock or take jabs at others like Hans Kung?  No, he meets with people in private trying to use reason. When it doesn't work, he doesn't go out and have fun at the man's expense for the entertainment of others. He leaves it to prayer, mindful that we can force no one to accept the truth, but we can always push them further away from it.


When we use sarcasm, harshness, stridency -- not only do we have little chance of changing the mind of our target, but we cause collateral damage in ways not visible to us.

Something else I have learned, and I am often guilty of this, is to not apply this standard to both those who are in error, and those who use stridency to defend the faith.  It goes both ways.

Maybe we can all make use of the sword, but using it mainly to circumcise our own hearts.  We defend the faith best when we defend the faith not just by sharing the knowledge we gain, but by doing so with the virtues in practice.

Pray for others before speaking to them, or about them


The most orthodox, tradition-minded, virtuous priests I know have always counseled me to pray for someone else first before addressing them with a concern or confronting them.  If we must talk about something they say in public, because it addresses something they have in the public domain, then we should also pray for them before doing so.  This has a way of softening our hearts so we do not speak with stridency and impudence, which risks doing more harm than good.


Are there not times for harshness?

Might there be a time to speak harshly to others?  Yes. But we have less risk for offending God if we follow a general rule to speak harshly when all other attempts have failed, especially privately.  And, it would seem that insolence in a rebuke is something best left for peer-to-peer, and authority figure to subject.  St. Thomas Aquinas gives us the guidelines for fraternal correction, including that of a prelate, as an act of charity, and we should read and digest this over and again (careful not to cherry pick something in isolation).

In response to the first objection on correcting a prelate, where it was argued that no one could touch the mount and the ark in the Old Testament without being punished, and those signify our prelates today, Aquinas says:

So, it is all in the, "how," we do it (and "when" if you read the full section on fraternal correction).

More to consider from the saints

"Still, as we know, there are times when it seems absolutely necessary to answer insolence with severity. Occasions do occur when we may resort to righteous anger. But this we must remember: It may sometimes be expedient - speculatively speaking - to answer someone severely; but in practice it is very difficult to do so without some fault on our part....

Gentleness is even more important when we correct others.  Corrections made in anger often do more harm than good, especially when the person corrected is also excited.  In such a case, the correction should be postponed. If we correct others when we are angry ourselves, our correction will always be mixed with harshness, and the person being corrected will, consequently, ignore our admonition.

He chose a humble virgin, from whom he might come forth meek and humble of heart, to display a most necessary and salutary model of these virtues for all mankind.

Here are some related things taken from a really great page with quotes from saints on anger:


Take pains to refrain from sharp words. Pardon one another so that later on you will not remember the injury. The recollection of an injury is itself wrong. It adds to our anger, nurtures our sins and hates what is good. It is a rusty arrow and poison for the soul. It puts all virtue to flight.

Be gentle with all and stern with yourself.

If, when stung by slander or ill-nature, we wax proud and swell with anger, it is a proof that our gentleness and humility are unreal, and mere artificial show.

Correction given in anger, however tempered by reason, never has so much effect as that which is given altogether without anger;for the reasonable soul being naturally subject to reason, it is a mere tyranny which subjects it to passion, and whereinsoever reason is led by passion it becomes odious, and its just rule obnoxious.

”Dismiss all anger, and look a little into yourself. Remember that he of whom you are speaking is your brother, and, as he is in the way of salvation, God can make him a Saint, notwithstanding his present weaknesses. You may fall into the same faults or perhaps into a worse fault. But supposing that you remain upright, to whom are you indebted for it, if not to the pure mercy of God?”

”Nothing is more powerful than meekness. For as fire is extinguished by water, so a mind inflated by anger is subdued by meekness. By meekness we practice and make known our virtue, and also cause the indignation of our brother to cease, and deliver his mind from perturbation.”

There are two methods to subdue anger. First, that before a person undertakes to act, he places before his mind the contumelies and sufferings which he will likely encounter, and, by reflecting on the shame borne by our Saviour, prepares himself to bear them patiently. Secondly, that when we behold the excesses of others, we direct our thoughts to our own excesses, by which we offend others. This consideration of our own faults will lead us to excuse those of others. For a person who piously considers that he also has something which others must bear patiently in him will be easily disposed to bear patiently injuries he receives from others.”


And from that classic work, the Imitation of Christ:

The humble live in continuous peace, while in the hearts of the proud are envy and frequent anger.

There are so many more I wanted to quote, so go to this page and read them all.

Note: The recommended links below are automatically generated by the tool, so they are not necessarily related content.
Posted by Diane Korzeniewski at 3:06 PM