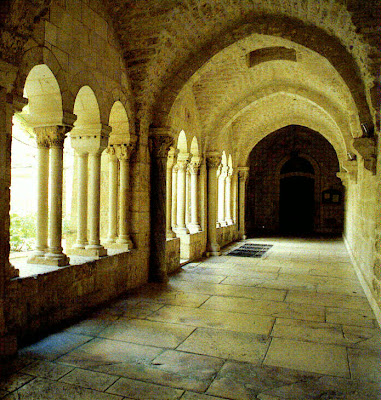 I made a post the other day on the statement by Cardinal Franc Rode of the Vatican's Congregation for Religious in which he said many priests have become too worldly.

A regular visitor to this blog is a member of a cloistered Dominican community in Summit New Jersey who goes by the name, Moniales. The community's blog - Moniales OP - is in my sidebar of blogging priests, religious and deacons. She leaves a comment in that post I mention above, which I am repeating here because it definitely warrants some discussion... and, it's one of my favorite topics.

I was happy to see you posted this.

I'm wondering though, why in your comments when he mentions that young people are attracted to contemplative life because of the more radical way of life that you instead pointed to active communities.

I mention this because we (and the media has noticed this, too) have noticed a huge interest in the contemplative vocation, not just among ourselves but other Orders. Why? Many of these young women have had NO contact with contemplative life and yet find this deep longing that only this way of life can fill...well, ONLY JESUS can fill this longing.

It's something that needs to be reflected on more seriously. Is there a special reason why the Lord is calling these fine, young women to the cloister? It's not just about what they are attracted to but the Lord calling them.

Cloisters have a particular mission in the Church and in space and time. Perhaps the state of the world today is "necessitating" the strengthening and increasing of contemplative/cloistered/monastic vocations???

This week a young journalist is coming to interview our community because she is doing an article on this topic.

I was in a big hurry that morning and looked at the article probably too quickly to pick up the fact that His Eminence was speaking about contemplative life.

It is a favorite topic of mine because, like Moniales & sisters, I too have noticed that there is an increase in vocations in specific areas of the Church.

Where do we see increased vocations?

First and foremost, as Sister pointed out, we see it in contemplative orders - the cloisters and monasteries (and probably elsewhere, such as hermitages). Consecrated Virgins living in the world are on the rise, as well (Canon 604), and they too are contemplative.

Sister asks, "why" and puts out this comment, which I repeat here:

Perhaps the state of the world today is "necessitating" the strengthening and increasing of contemplative/cloistered/monastic vocations???

I have had my own theory on "why" and I'm pretty sure I've voiced it in previous post. However, it's a good time to put it back out for discussion. I like to use analogies. War is far from glorious and I don't like using military analogies, yet there is one that is very fitting for what I believe is taking place. The Church has been fighting a series of battles from day one and today, more than ever, there is a war for souls.

For the last forty years, we have seen a decline in Mass attendance, in the sacraments - most especially confession. In some quarters, baptized Catholics are electing not to have their babies baptized and do not encourage confirmation. Within the Church there are disoriented theologians who are constantly trying to get the Church to follow the world. Catholic Universities have lost their Catholic identity and sending your children to all but a few, could cost them dearly as dissident professors teach them to challenge Church teachings rather than follow them.

As long as man has had the ability to launch something, battles have often started out with a "softening of the target". In the battle of Gettysburg during the US civil war, artillery pounded the position of enemy soldiers for some time before troops marched across the field. To put soldiers on the field before the target was softened, would put them at far greater risk, and reduce their overall effectiveness. In medievil times, anything that could go into a trebuchet would be hurled against a castle before men would try to scale the walls. Even tallships would come up along side each other and let their canons blast away at each other from a very close range before men would go across in hand-to-hand battle on the deck. In modern times, targets have been softened by air and by sea.


Unfortunately, man has not always focused these pre-invasion tactics strictly on military targets, often harming innocent civilians. But, here - we are talking about God's use of the strategy so fundamental to military operations. Since God is perfect, He does not miss or take out the innocent in the process of conducting His work.

At various times in the Church's history, there have been times of great growth in the faith, and other times when heresies and other things contributed to a decrease in the faith. More and more people are beginning to see the damage brought about by moral relativism, consequentialism, modernism, consumerism, materialism, and probably a dozen more "ism's".

My strongest belief is that the attraction of so many young people into contemplative, monastic, cloistered communities, is that they are being called up to participate in "softening the target" with the artillery of their prayers and sacrifices. The modern world could not possibly comprehend this because it is not only counter-cultural, but requires faith to grasp. It cannot be measured, nor can it be purchased. Hence, to the world, things such as prayer and sacrifice have no value.

Why did I focus on active communities?

Probably because for me, growth in active communities signals the earliest stages of phase 2: The soldiers landing on the beach. Success in the field where direct contact with others is dependent on continued "artillery" support.

Active communities are also softening the target with their prayers and sacrifices. But, they are on the front line dealing with souls up front and personal. The cloisters and monasteries contribute to the success of active communities through continued support from places unseen.

Prudent bishops will do everything they can to get a prayer powerhouse in their backyard in the form of a monastery or cloister. Bishop Olmstead exhibited this when he invited sisters from Mother Angelica's order to come to the diocese of Phoenix. He's got his prayer powerhouse, and then he went after some ground troops. He was successful in getting some sisters from the Mary, Mother of the Eucharist Dominicans out of nearby Ann Arbor, here in Michigan. I can tell you that there are bishops who are trying very hard to get communities within their dioceses, but there are still not enough to go around. I've heard Mother Assumpta Long talk about the many requests she gets, but they simply cannot fill all of them. The bishops aren't looking for communities with new-age ideals. Reiki and Enneagrams don't bring a diocese graces. Rather, these bishops are looking for communities that understand Eucharistic and Marian devotion.

Which Catholic communities are flourishing and expanding for both active and contemplative?

What do they have in common?

Statistical analyses could probably be done in various ways to validate or negate my view, based on observations below.

I would like to suggest that the following will be found:


Perhaps it might be good to make a list of what else will NOT be found in these flourishing communities - both contemplative and active not mentioned above:


I'm sure there are more. Feel free to add your observations to the combox. Do you agree, or disagree?


Te Deum Laudamus! Home
Posted by Diane Korzeniewski at 6:00 AM