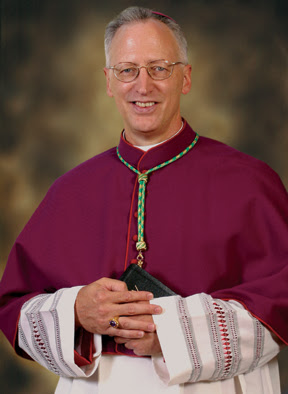 Bishop Earl Boyea who has been an auxiliary bishop here in the Archdiocese of Detroit moves to Lansing to succeed Bishop Carl Mengeling.
This is a good thing for the Diocese of Lansing. He looks to St. Augustine for guidance on pastoral care of his people. Perhaps Michigan's governor will at some point find herself undergoing some catechesis on life issues.
It's also noteworthy that Bishop Boyea has been periodically celebrating the extraordinary form of the Roman rite - the "Tridentine" Mass for some time now at St. Josaphat in Detroit. I recall him being there during the Indult years.
One way to get to know a man is through is writings. I recalled a really good article I read by Bishop Boyea, found on the internet around the time Pope John Paul II died when I took an interest in my Catholic faith. He addresses a number of things in this article, but I will extract one segment here to give you the flavor. This is a contrast between good Catholic thought (among other things), and hippy-era priestly thinking (which is getting old and gray). My emphases in bold, and comments in red.

Fr. Cozzens discusses at length what he views as attacks on the integrity of the priest as a human being, among which he includes the tension between the strict teachings of the Church and the more pastoral disposition of priests’ own consciences. He quotes Fr. Bernard Häring on the problem created “when religious authorities demand all too much submission to an obscure package of doctrines.” To be sure, I have felt at times, and I suppose most priests have felt at times, a tension between Church teaching and my own pastoral sensibilities when working with the real problems of people. I take that as a signal that I need to understand the teaching more thoroughly. Let me say it quite flatly: my presumption is not that I am right but that the Church is right [this is called humility]. Christ made no individual promise to me that the Spirit would lead me into all truth [you gotta love that comment because so many people are guided by their own malformed or underformed consciences]; he did not give to me the keys of the kingdom [hippy-era priests and bishops challenge church teachings, as opposed to following them in a sense, making themsevles arm-chair popes]. These are promises made to the Church, the Body of Christ, of which I am a member not as an equal but as a servant. [Cha-ching!]

That is not, according to Fr. Cozzens, the attitude of a healthy priest. The healthy priest, he writes, “possesses the courage to stand in loyal opposition should official Church policy appear unfaithful to the gospel of Christ.” [that's it - Fr. Cozzens' compass has got to be broke!] At the very least, one might suggest that opposition should be limited to when one “knows” (how would one know for sure?) that Church policy is unfaithful to Christ, not to when it “appears” to be so. Moreover, “loyal opposition” is a political term usually used for the party that is out of power. Is that the model for a healthy priest? Why would one be ordained, solemnly vowing to devote his life to the service of the Church, while expecting to oppose the leadership of the Church? [Because he is terribly malformed and disoriented in his theology and basic catechism] Healthier, it seems to me, is Paul’s admonition that we be of one mind and one heart. [and, Fiat mihi secundum Verbum Tuum]

Go read, Another Face of the Priesthood in First Things Magazine by Bishop Earl Boyea

That is at the root of it folks!

Please pray fervently for Bishop Earl Boyea in his new position, and for all the bishops. May God invigorate them with the grace of courage seen in the early bishops. In those days, they were threatened with their very lives, often dying horrific deaths for the faith. Today, they merely need to die to self and accept, with great courage, a good deal of public criticism for teaching the Catholic faith without filters.

Bishop Earl Boyea was at the last Helpers of God's Precious Infants Prayer Vigil in November of 2007. The next vigil will be held Saturday, March 29th with Bishop Quinn - the day before Divine Mercy Sunday. Hopefully, he can keep that date. Details to follow soon.

Posted by Diane Korzeniewski at 5:17 AM