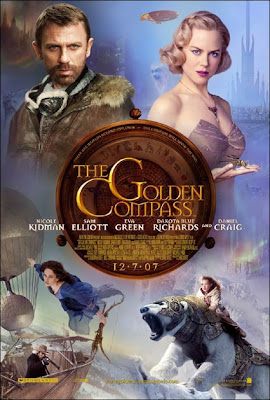 There is an atheist children's author, and his aim is to make atheists of your children. The first book of Philip Pullman's, His Dark Materials trilogy called The Golden Compass, is about to hit the big screen this December.

The Catholic League's Bill Donohue appearing on The World Over Live with Raymond Arroyo, asked Catholics and Christians to stay away from this movie, and the related books. Don't give Philip Pullman your money on the basis that you want to judge for yourself. The Pulllman trilogy books are clearly anti-Catholic and use words common to the Catholic faith to depict evil. "The Magisterium" is considered the bad force, with evil priests and cardinals. 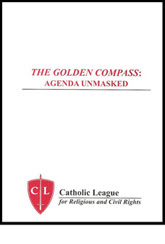 The Catholic League has put out a booklet which details the problems with the movie and the books in order to better inform Catholics now, before the movie hits the big screens in December, and before parents are tempted to buy the trilogy in books. The movie has been sanitized to some extent of anti-Catholic content, but the books have not. Actress Nicole Kidman, who is Catholic, justified acting in the movie on the basis that the anti-Catholic material was removed or modified (which is only partly true since obvious Catholic symbols and words are used in a sinister context). Nicole Kidman seems not to think too far ahead at how children and parents will get sucked into buying the anti-Catholic books after they see the movie!!!!

What's the big deal? Get the booklet from Catholic League and find out.

Catholic Family Vignettes: "The Golden Compass" - no sense of direction?

A British writer, Peter Hitchins, says of children's author Philip Pullman, "This is the most dangerous author in Britain". Author Amy Welborn, who wrote De-coding DaVinci, contrasts "His Dark Materials" trilogy work with the skills of Catholic writer J.R.R. Tolkein.

EDIT NOV 7, 2007: There is an excellent write-up in the periodical, This Rock and published at catholic.com. Here is one example (this is based on the book series, not the movie, which children are certainly going to desire reading after seeing the movie, which is somewhat sanitized of the anti-Catholic, pro-atheist agenda).

6. Why should parents be concerned about the film and the books?Because of the film and the wide audience Pullman’s books have, Catholic parents should be aware of how Pullman uses the literary genre of children’s fantasy to undermine the Christian faith and promote atheism. The major problems fall into these general categories:

To read the entire review, see these two links: