Fr. Bill Casey, C.P.M. on the toughest opponent we face in spiritual combat 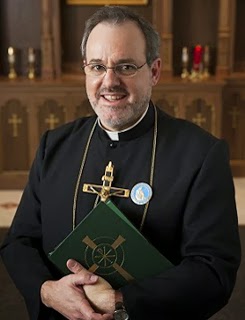 "The toughest opponent you'll ever have to overcome during a spiritual battle
is the one you see in the mirror."  Fr. Bill Casey, C.P.M.


Recently, I pulled a quote from Dom Lorenzo Scupoli's, "Spiritual Combat," written in the late 16th  and early 17th centuries so I was naturally drawn to a series of talks Fr. William Casey gave back in August of 2013. The videos popped up yesterday at random in YouTube for me.  Newer Smart TV's and Blu-Ray DVD players allow streaming from YouTube right on the main television. I discovered I could pair it with my iPhone or laptop for easier control last night. This is good technology and I am grateful to Fr. Casey and Air Maria for making this freely available on the web - something more apostolates ought to consider. 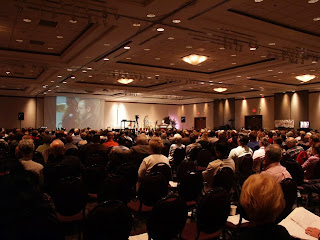 Fr. Casey, who is of the Fathers of Mercy,  really knows how to package things and keep you captivated. I heard him for the first time at a Call to Holiness conference in 2005 (picture at right shows him on the big screen). His preaching style can sometimes surprise you if you haven't seen it, but you would be hard pressed to drift during his talks.

In the video below, he discusses the proper context for spiritual combat.   We must be aware of the environment in which we are doing this battle  - one that he calls,"a spiritual, moral, and cultural minefield." He spends considerable time talking about this environment.  However, the battle we must focus on the most is not with all those other people; it is within the self.  The heart of his message is that we must become holy and by our example win others for Christ. Near the end, he gives a concrete list of ways we can work on this.

As one who served in the military, Fr. Casey points out the many military words and expressions found in Sacred Scripture.  There are battles, combat, swords, putting on of armors and helmets, etc.  He quotes some passages to make his point.  The Gospel itself is a two-edge sword and he explains all of this.  In his talk, he points out that terminology like, "defending the faith" is not an outdated expression, nor will it ever be, but the first fortress we must defend is the one within.

He had some interesting quotes from saints on this, like one from St. Philip Neri, which I leave for you to hear in the video. He also quoted Fr. John Hardon a number of times, and told an interesting story at the end about Padre Pio.

He cautioned also against presuming that all of this military talk is just for guys saying, "some of the most outstanding soldiers for Christ I have known have been the holy women."  My own thoughts turned to those who stood beneath the Cross with Christ during his agony.  He brought up other examples like St. Therese, Mother Teresa, and Mother Angelica; but, he also talked about the heroism involved in just carrying out one's duties in a holy way, and in our small corner of the world where God gives us place.

I also thought his discussion of the many "ism's" playing out in our culture today was interesting, including that of new kind of "paganism."  Old heresies end up being re-packaged with perhaps some mutations and he names a few of them.

Some mistakenly think that I am against pointing out problems facing Catholics, or among the members of the Church, or even confronting people with error.  That's not the case.  What I have an aversion to, because I believe it to be damaging, is outward contempt for others, or mocking them and having fun at their expense, scoring figurative "points" on the most entertaining put downs. This puts an ugly face on the Church, which can be sinful under certain circumstances.

Fr. Casey demonstrates command of the subject without crossing over into that kind of contempt and disdain that can turn more people away from the faith than attract them to it.  There will always be those who reject truth, but we need to make sure it isn't our growling teeth that causes them to flee.  As I often say, we can only count those who come on account of our words or example, but we can never know the many we pushed away.  We will have to account for that on the day of our judgment, if God finds our lack of virtue contributed in some way. This is a subject I don't think is taught enough when it is much needed to temper or moderate our knowledge of problems confronting Catholics today.

Here is the first conference of several he gave on the topic of Spiritual Combat.

Note: The recommended links below are automatically generated by the tool, so they are not necessarily related content.
Posted by Diane Korzeniewski at 2:43 PM