Some years ago I photographed an Advent Rorate Mass and the priest celebrating gave me an explanation here.

Sometimes we get one at Assumption Grotto during Advent when the priests of Holy Cross celebrate it.  Every Advent I get emails and people asking me in passing if we will have one this year.  It probably wouldn't hurt to let them know you are interested, then offer to help out with  all those candles.  Altar boys are needed, as well.

Contrary to what everyone may think, I'm not the kid sister whom everyone can send forth to secure something from the good fathers.  I also know from experience that Fr. Perrone and the priests of the Holy Cross are willing to listen to requests and try to accommodate, if it is possible.  Some years ago we  tried to get a Rorate Mass using the 1962 Missal, but the only day that was open for one of the priests happen to involve a class that could not be substituted with, if I recall, a votive Mass.

I have never seen one done in the very early morning at Grotto, as they were traditionally done, just because it doesn't work out well for a commuter parish.  I've also never seen Fr. Perrone do one at his 7:30 a.m. TLM (and it's almost light out by then). This was a custom that began with the German priests.  So, in the past they have always been offered at the 7:00 PM Mass on a Tuesday or Thursday, which are the days they are scheduled, and happens to be the days Fr. Perrone has scheduled the ordinary form of the Mass in Latin (those on M-W-F at 7:00 PM are all TLM low Masses).

So, it is doubtful we would have this Mass in the extraordinary form, unless people were to petition Fr. Perrone to shuffle either the priests or the form of the Mass around.  Here again, it doesn't hurt for people who are interested to let Fr. Perrone and the ORC priests know - now.  If there are enough requests and people offering to help out, perhaps one could be available in the extraordinary form, maybe even at a special early-bird ahead of the 7:30 AM Mass, or in the evening.

If one is planned, and you become aware of it, please let me know.  I've had it happen before where I went to an evening Mass in Advent and walked in on an unannounced Rorate Mass that was pulled together at the last minute.  That's not the best way to make it happen.

I would love to be able to re-take this shot below now that the table altar has been removed, but I know from past experience, it will take a lot more people committed to showing up and helping out to make it happen, from altar boys, to people placing candles out, and even offering donations for a few boxes of candles (which must be white).  And, it is also subject to availability of the priests of the Holy Cross.

In the end, it simply may not be possible, but at least I have made my post somewhat answering the question in anticipation of more questions in addition to those already received.

As an aside, the ORC priests will hold a Day of Recollection at Assumption Grotto, if memory serves, on December 15th, following the Noon Mass until around 5:00 PM.  More info on that to follow. 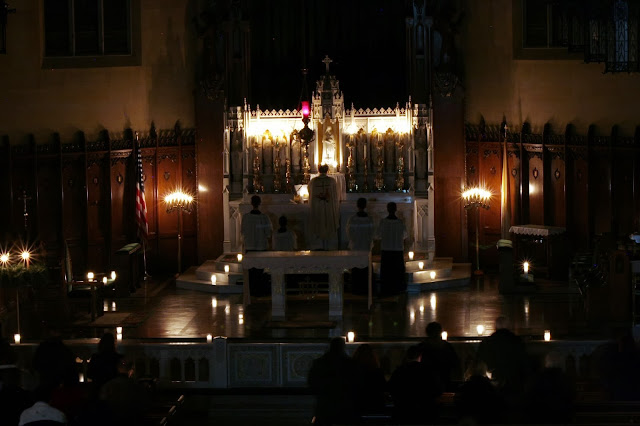 A note about the blog and social media


There's really so much out there on Catholic portals, blogs, and websites, it's impossible to keep up with  especially here at the blog.  If you follow me on Facebook or Twitter, you are getting many more reading options than you will here on the blog. I don't get into Google+ as much as I would like, but I will look expanding that.   In social media, it takes one or two clicks to just pass something along.  In Facebook, I will not be using the public option as much since I learned that those commenting may apparently have my posts showing up in the feeds of their friends.  If you want to see what I'm posting in Facebook, you will have to send me a friend request.  The subscribe option only works for public updates.  Let me know with a message that you are are a blog follower or parishioner of Assumption Grotto.

In case it is not obvious, when I share something - be it here or in social media, it is not an endorsement of anything written or even the media where it appears.

Note: The recommended links below are automatically generated by the tool, so they are not necessarily related content.
Posted by Diane Korzeniewski at 8:04 AM