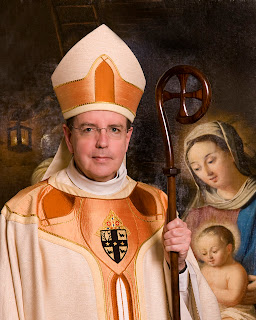 Archbisop Allen H. Vigneron
“Priests, deacons, and ecclesial lay ministers will want to avoid lending support to such a misguided effort. On behalf of the archdiocese, Archbishop Vigneron has asked the organizers to cancel their plans for this national gathering that distorts the true Spirit of Vatican II.”

Detroit's Shepherd raises his staff to warn the sheep about the American [not-so] Catholic Council's meeting coming up in June 2011.  This advisory comes out with more than enough time for the faithful to be informed.

This statement also comes out early enough to let any priests or bishops who are known to speak at conferences with these dissident groups, and who may have been invited to speak at this conferece, not to bother looking for sanction.  Read on...

The Archdiocese of Detroit has been contacted by concerned members of the faithful about a movement called the American Catholic Council. Self-described as "bringing together a network of individuals, organizations, and communities to consider the state and future of our Church," they have planned a national gathering in Detroit for the weekend of Pentecost 2011. The American Catholic Council movement and its national gathering are not conducted under the auspices of the Detroit archdiocese, the universal Roman Catholic Church, or any entity or organization affiliated with the archdiocese or the universal Roman Catholic Church.
Although their stated purpose is to "respond to the Spirit of Vatican II by summoning the Baptized together to demonstrate our re-commitment and the documents issued by the American Catholic Council offer some valid aspirations for the Church, in fact, the goals proposed are largely in opposition to the teachings of the Second Vatican Council and the Holy Spirit, which inspired the Council.
The archdiocese wishes to commend and embrace all true efforts at Church renewal - the American Church Council's agenda is not such an effort. Some of the advertised speakers and groups organizing the effort espouse positions which are clearly contrary to Catholic faith, leading to alienation and estrangement from the Church. The Archdiocese of Detroit cautions any Catholic against participating in the American Catholic Council local listening sessions and national gathering in June 2011. Catholic parishes, schools, and institutions are not to host any meetings, gatherings, or "listening sessions" associated with the planning of the June 2011 American Catholic Council. Priests, deacons, and ecclesial lay ministers will want to avoid lending support to such a misguided effort. On behalf of the archdiocese, Archbishop Vigneron has asked the organizers to cancel their plans for this national gathering that distorts the true Spirit of Vatican II. He asks us all to pray for the guidance of the Holy Spirit so that we may embrace authentic development of faith and morals, and shun efforts which threaten unity.

Just as an aside, the Saturday before Pentecost Sunday is when Detroit traditionally ordains it's priests. The ACC meeting is taking place on that day in June of 2011. 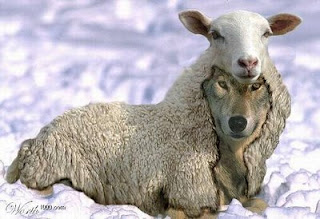 WHAT IS THE "AMERICAN CATHOLIC COUNCIL?"
The American Catholic Council is a group which is acting like it's own "magisterium".  They don't have the mind of the Church; they want the Church to mind them. Think of an umbrella, and under that umbrella is just about every dissident group in America!.  They want to turn the Catholic Church into a designer religion, where - like Burger King - you get to "have it your way".  The funny thing is that if you talk to any number of them, they don't even espouse all of the same "truths" about any one thing.  It hasn't occured to them that truth is not dynamic and moving, but static and fixed.


Extra reading....
WHY WAS I SO SURE THE ARCHBISHOP WOULD SPEAK UP?

Short answer: He did it in Oakland (at least, something similar, and with the same kind of group).

While Msgr. Vigneron was in Oakland he took on the Call to Action, head on, after they blindsided him by sending out surveys to the priests of the diocese asking them for their opinion on clerical celibacy (as Fr. Z so rightly points out, dissidents think that poll numbers count). In reality, should we give credence to Oprah's "truths" on matters of faith since so many follow her?  Archbishop Vigneron's reponse, when he found, out was to offer a little episcopal instruction.

Really... check it out: Archbishop Vigneron, Call to Action, and Priestly Celibacy
LEADING THE PRO-LIFE EFFORTS 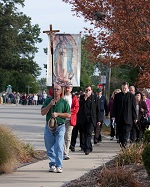 It is true that there has been silence from the pulpits over these past few decades on abortion, among other moral issues where people openly dissent - throughout many dioceses of the United States.  I prefer not to look back at what was not done, and instead focus on what is happening now.  His Excellency has led massive pro-life prayer vigils organized by the Helpers of God's Precious Infants of Michigan.  Just last month over 500 joined him in Livonia (see my photostory here).  In November of 2009, his first year at the helm, well over 1000 showed up for the 7:30am Saturday morning Mass, and an estimated 700 walked and prayed on the 8 Mile Blvd in front of two clinics, one on either side (photostory).
On October 3, 2010, he hit spoke out on embryonic stem cells: Archbishop Vigneron: Even in a petri dish, life merits protection.  You can hear an interview on the local secular station here, on this issue.
TEACHING DEVOTION
He has gently, but firmly, pressed forward, restoring time-tested devotions here in the Archdiocese of Detroit, chief among them, Eucharistic and Marian devotion.  He has encouraged devotion to Our Lady of Perpetual Help, and has led several Rosaries for various things, including one for the people of Haiti during that devastating earthquake. He has been encouragin priests to devote themselves to the Sacred Heart of Jesus.  From Archdiocese of Detroit website, this past June.

Also on June 11, priests of the archdiocese will gather to mark the Solemnity of the Most Sacred Heart of Jesus. The Friday afternoon event will include "a Eucharistic Holy Hour, during which we can renew the consecration of our priesthood," Archbishop Allen Vigneron said in a Feb. 12 letter to priests.

"I have in mind that we should consider working together for a renewal of our practice of devoting the First Fridays especially to the Sacred Heart of Jesus, with a particular emphasis on joining together," he wrote.

I should note that vocations have gone up since he arrived.


THANK THE ARCHBISHOP!
Most bishops hear from the faithful when they are upset about something, but how many will send a kind gesture of support and assurances of prayer?  It's obvious by the letter from the Archdiocese of Detroit, that letters of concern were received.  He looked into it.  He acted.

You might be thinking, "he is just doing what he is suppose to do".  Well, consider all that hate-mail he is probably about to receive as dissidents respond.  He's on the side of truth, so he can simply brush it off, but a few letters of support, Mass cards, and spiritual bouquets would probably be refreshing.  The AoD's website has changed, so consult someone on this page as to where to send your gesture of support.  You can also email the archdiocese at infodesk@aod.org.  While you are at it, consider asking him to write to his blog once or twice a month (see the link in my sidebar under his pic).

This is a good time to remind Catholics everywhere, especially in the Archdiocese of Detroit about Rosary for the Bishop.  Sign up, even if it is one Rosary per month.  Here is Archbishop Vigneron's page.

PRAY FOR DISSIDENTS
In all seriousness, please remember these Catholics at the center of this group in your prayers.  While some Catholics understanding the teachings and simply dismiss them because they are inconvenient, there are many more who are just uninformed and malformed.  Things like this meeting which will take place in 2011 serve only to mislead even more people.  God bless the Archbishop and the Archdiocese of Detroit for speaking with such clarity.

SUPPORT CALL TO HOLINESS
It's also a good time to mention that the Call to Holiness, which came into it's own right because of Call to Action, will be hosting a conference which is faithful to the Church at that same time. Donations are always welcome.  See details here.


OTHER POSTS ON ARCHBISHOP VIGNERON


The obedient are not held captive by Holy Mother Church; it is the disobedient who are held captive by the world!
Note: The recommended links below are automatically generated by the tool, so they are not necessarily related content.
Posted by Diane Korzeniewski at 5:34 PM