Archbishop Lucas was justified to act quickly in "Intercessors" case 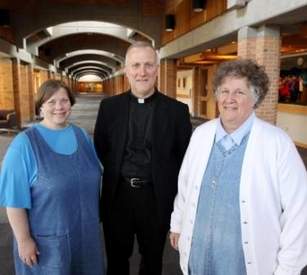 Photo: JAMES R. BURNETT/THE WORLD-HERALD
“There have been a lot of tears,” said the Rev. Mark Nolte, a Roman Catholic priest who belonged to the organization. “But at the same time, we know there's a bright future for us, and we're thankful to the archbishop for supporting us and being willing to walk with us.”

Fresh from Omaha.com is something very revealing: We get a glimpse into why the archbishop acted so fast.

It is an interview with three of the 48 people being cared for by the archdiocese at a retreat center after their community was suppressed.

I'm sure that time will reveal even more about what transpired to prompt the archbishop to act so quickly following the resignation of Mother Nadine.  He was not only justified, it would have been cruel to leave the 48 in that situation given what was going on.

Here's an excerpt (emphasis mine in bold)

But on the morning of Sunday, Oct. 3 — two days after Brown's resignation was announced — people close to her began taking steps signaling that they would not comply with the archbishop, the three former Intercessors said.

A board member and a man she identified as her lawyer walked into a house the Intercessors owned on a neighboring street and announced that they were there for the association's assets, Neuhoff said. [keep in mind these people signed over their own assets when they joined!]

She said they took computers and files with financial and personal records from the house. Then people began carrying boxes out of the main house on the Intercessors campus, including in the middle of the night. That was confusing and frightening, the three said. [especially with personal information]

The three called police and archdiocesan officials [!] They were told that the civil corporation had the legal right to move its property.

The corporation changed the locks on the Intercessors' homes and asked for their car keys, Nolte said. It was becoming obvious, he said, that the faction close to Brown would not budge.

He said the situation became more tense in the two weeks that followed [!!!], culminating with Friday's suppression and the archbishop's offer of sanctuary at the retreat. [Some wondered, "why the rush to suppress" and "why wasn't there a 'cooling off' period" if the majority of the lay board of directors were not cooperating with the archbishop.  This explains it.... read on]

“We were all very happy to get on that bus,” [!]Nolte said. “This was not done with any malice or evil intent toward Mother Nadine. It was necessary for us to disassociate ourselves from her because of her lack of obedience to the church.” [non serviam]

Brown and other leaders could not be reached for comment Monday.

Levy said Monday: “It was a very chaotic time immediately after the archdiocese had Mother Nadine resign and took over the campus. The officers and employees of the corporation were doing what they thought was appropriate to do to protect the assets and property of the corporation.”


The Intercessors' civil corporation, he said, “was continuing to take care of the hermits and would have continued to do so.”

Levy declined to comment on specifics, saying he didn't think it productive to get into a back and forth.

Nolte said a board member told him the members would have to go elsewhere. That process is just beginning.

Nolte said he hopes that the group can create a new community with the same calling, and he said that Baxter and Lucas have agreed to examine whether that could be possible.

“We really don't know what the future holds,” Nolte said.

Source Former hermits put faith in future (Omaha.com) - This was a longer article and I only excerpted a portion of it, so I do recommend you follow the link if interested in this story.

But where they hermits in the true sense?
Also, there is a very good post, posed to a sister, who also happens to be a blogging, diocesan hermit.  She distinguishes between the canonical hermit state of life, and why these "hermits" as they were called, could not simply be admitted to this way of life automatically.  It's an interesting read about a state in life that few are aware of and I highly recommend you check it out....

Go read: Intercessors of the Lamb and Profession under Canon 603 by Sr. Laurel

The obedient are not held captive by Holy Mother Church; it is the disobedient who are held captive by the world!
Note: The recommended links below are automatically generated by the tool, so they are not necessarily related content.
Posted by Diane Korzeniewski at 11:54 AM