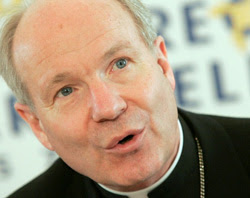 Some sources - initially Kath.net, were reporting that Cardinal Schonborn of Vienna, Austria, was headed to Medjugorje for about a month around December 8 through early January (perhaps this was misunderstood and he was intending to make a brief stop during those dates).

It turns out that this information was not intended to be public according to the Cardinal's secretary.  Rather, it was suppose to be a personal and private visit.  CNA reports:

Cardinal Christoph Schönborn will visit Medjugorje, the small town in Bosnia-Herzegovina where six young people have allegedly been witnesses of apparitions from the Virgin Mary. But according to the Archdiocese of Vienna, the trip is “completely private” and does not imply a statement from the cardinal on the veracity of the apparitions.

“It was supposed to be a completely private visit, it was not supposed to go out to the internet,” Fr. Johannes Fürnkranz, personal secretary to the Archbishop of Vienna, explained to CNA.


The cardinal's visit was supposed to be absolutely personal and not public, but since it has been leaked, I can only confirm that it will take place. There is no statement whatsoever involved (in the visit),” Fr. Fürnkranz told CNA.


Did they really think a high-profile person visiting Medjugorje could be kept quiet?

The CNA article goes on to give some background on where things stand right now.  This was interesting:

Speaking on background, an official at the Congregation for the Doctrine of the Faith told CNA that the Roman dicastery remains behind the bishops of Bosnia-Herzegovina.


“The local bishops have the ultimate authority on this matter, and their arguments against the alleged apparitions are doctrinally solid,” the official said. [and, I believe the credibility of the bishops of Mostar will be redeemed - - soon]


Asked if Medjugorje should not be judged by its fruits of many conversions and vocations to the Church, the official responded: “It is not the duty of this Dicastery to make a pastoral assessment [fruits-focused], but a doctrinal one [events-focused]. But regarding the argument, it can equally be argued that God can write straight with crooked lines, just as it has been proven in several previous occasions with patently false apparitions.”

Read the entire article at CNA: Cardinal Schönborn’s visit to Medjugorje 'not a statement,' spokesman says

I'm closing comments on this because it is not going to be productive.

Posted by Diane Korzeniewski at 5:27 PM