The Manhattan Declaration: Many voices become one voice! 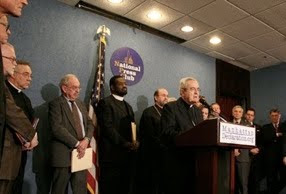 By now you have probably heard of the Manhattan Declaration.  If you haven't, then you will want to read this and consider signing it.  I have already done so myself.  I believe this unprecedented coalition is going to prove to be a powerful force.

Before you suggest that it is undue influence by Christians on the government, consider that each individual is an American with a right to be heard.  It is difficult to hear them individually, but when individuals with like values band together, it gives them a greater voice in the public square.  It's no different than other groups who for a single voice through many who come together.  What is interesting about this is that it probably the most cohesive effort amongst Christians in America.

It's not about fighting for what is right for us as Christians, but for the good of all.  The "common good" must include the vulnerable: The elderly, the unborn, the disabled, and others who have no voice.  The US Constitution provides for freedom of religion, not freedom from religion  Individuals, businesses, and institutions ought not be forced to participate in those things which are contrary to their conscience, as some hospital care workers have been forced to choose between their job and participating in an abortion.

A good read on the web on the Manhattan Declaration comes from the distinguished Italian journalist, Sandro Magister.  I'll start you out here and be sure to follow the link to continue reading it at his blog.

ROMA, November 25, 2009 – On the other side of the Atlantic, the news passed almost without notice: the news about a strong public appeal in defense of life, of marriage, of religious freedom and objection of conscience, launched jointly – a rarity – by top-level representatives of the Catholic Church, the Orthodox Churches, the Anglican Communion, and the Evangelical communities of the United States.


Among the religious leaders who presented the appeal to the public on Friday, November 20, at the National Press Club in Washington (in the photo), were the archbishop of Philadelphia, Cardinal Justin Rigali, the archbishop of Washington, Donald W. Wuerl, and the bishop of Denver, Charles J. Chaput.


And among the 52 first signatories of the appeal were 11 other Catholic archbishops and bishops of the United States: Cardinal Adam Maida of Detroit, Timothy Dolan of New York, John J. Myers of Newark, John Nienstedt of Saint Paul and Minneapolis, Joseph F. Naumann of Kansas City, Joseph E. Kurtz of Louisville, Thomas J. Olmsted of Phoenix, Michael J. Sheridan of Colorado Springs, Salvatore J. Cordileone of Oakland, Richard J. Malone of Portland, and David A. Zubik of Pittsburgh.


The 4700-word appeal is entitled "Manhattan Declaration: A Call of Christian Conscience," and takes its name from the area of New York in which its publication was discussed and decided last September.


The final drafting of the text was entrusted to Robert P. George, a Catholic professor of law at Princeton University, and to Evangelical Protestants Chuck Colson and Timothy George, the latter a professor at the Beeson Divinity School at Samford University in Birmingham, Alabama.


Apart from the bishops, the other Catholics who signed the appeal include Jesuit Fr. Joseph D. Fessio, a disciple of Joseph Ratzinger and founder of the publisher Ignatius Press, William Donohue, president of the Catholic League, Jody Bottum, editor of the magazine "First Things," and George Weigel, a senior fellow of the Ethics and Public Policy Center.


The "Manhattan Declaration" has not emerged in a vacuum, but at a critical moment for American society and politics: precisely while the administration of Barack Obama is pushing hard for passage of a health care reform plan in the United States.

Here is the an abbreviate summary of the 4700 word appeal:


Christians, when they have lived up to the highest ideals of their faith, have defended the weak and vulnerable and worked tirelessly to protect and strengthen vital institutions of civil society, beginning with the family.


We are Orthodox, Catholic, and evangelical Christians who have united at this hour to reaffirm fundamental truths about justice and the common good, and to call upon our fellow citizens, believers and non-believers alike, to join us in defending them. These truths are (1) the sanctity of human life, (2) the dignity of marriage as the conjugal union of husband and wife, and (3) the rights of conscience and religious liberty. Inasmuch as these truths are foundational to human dignity and the well-being of society, they are inviolable and non-negotiable. Because they are increasingly under assault from powerful forces in our culture, we are compelled today to speak out forcefully in their defense, and to commit ourselves to honoring them fully no matter what pressures are brought upon us and our institutions to abandon or compromise them. We make this commitment not as partisans of any political group but as followers of Jesus Christ, the crucified and risen Lord, who is the Way, the Truth, and the Life.


The lives of the unborn, the disabled, and the elderly are ever more threatened. While public opinion has moved in a pro-life direction, powerful and determined forces are working to expand abortion, embryo-destructive research, assisted suicide, and euthanasia. Although the protection of the weak and vulnerable is the first obligation of government, the power of government is today often enlisted in the cause of promoting what Pope John Paul II called "the culture of death." We pledge to work unceasingly for the equal protection of every innocent human being at every stage of development and in every condition. We will refuse to permit ourselves or our institutions to be implicated in the taking of human life and we will support in every possible way those who, in conscience, take the same stand.


The institution of marriage, already wounded by promiscuity, infidelity and divorce, is at risk of being redefined and thus subverted. Marriage is the original and most important institution for sustaining the health, education, and welfare of all. Where marriage erodes, social pathologies rise. The impulse to redefine marriage is a symptom, rather than the cause, of the erosion of the marriage culture. It reflects a loss of understanding of the meaning of marriage as embodied in our civil law as well as our religious traditions. Yet it is critical that the impulse be resisted, for yielding to it would mean abandoning the possibility of restoring a sound understanding of marriage and, with it, the hope of rebuilding a healthy marriage culture. It would lock into place the false and destructive belief that marriage is all about romance and other adult satisfactions, and not, in any intrinsic way, about the unique character and value of acts and relationships whose meaning is shaped by their aptness for the generation, promotion and protection of life. Marriage is not a "social construction," but is rather an objective reality – the covenantal union of husband and wife – that it is the duty of the law to recognize, honor, and protect.


Freedom of religion and the rights of conscience are gravely jeopardized. The threat to these fundamental principles of justice is evident in efforts to weaken or eliminate conscience protections for healthcare institutions and professionals, and in anti-discrimination statutes that are used as weapons to force religious institutions, charities, businesses, and service providers either to accept (and even facilitate) activities and relationships they judge to be immoral, or go out of business. Attacks on religious liberty are dire threats not only to individuals, but also to the institutions of civil society including families, charities, and religious communities. The health and well-being of such institutions provide an indispensable buffer against the overweening power of government and is essential to the flourishing of every other institution – including government itself – on which society depends.


As Christians, we believe in law and we respect the authority of earthly rulers. We count it as a special privilege to live in a democratic society where the moral claims of the law on us are even stronger in virtue of the rights of all citizens to participate in the political process. Yet even in a democratic regime, laws can be unjust. And from the beginning, our faith has taught that civil disobedience is required in the face of gravely unjust laws or laws that purport to require us to do what is unjust or otherwise immoral. Such laws lack the power to bind in conscience because they can claim no authority beyond that of sheer human will.


Therefore, let it be known that we will not comply with any edict that compels us or the institutions we lead to participate in or facilitate abortions, embryo-destructive research, assisted suicide, euthanasia, or any other act that violates the principle of the profound, inherent, and equal dignity of every member of the human family.


Further, let it be known that we will not bend to any rule forcing us to bless immoral sexual partnerships, treat them as marriages or the equivalent, or refrain from proclaiming the truth, as we know it, about morality, marriage, and the family.


Further, let it be known that we will not be intimidated into silence or acquiescence or the violation of our consciences by any power on earth, be it cultural or political, regardless of the consequences to ourselves.

Posted by Diane Korzeniewski at 10:45 AM