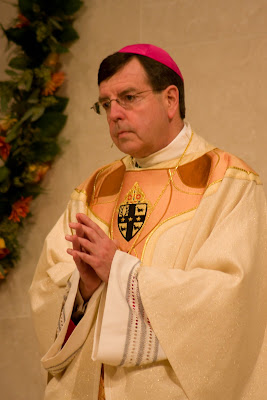 In this week's Michigan Catholic is an article entitled, Catholics asked to pray for a nation on path to a "culture of death" (See UPDATE 2 below. Check back for live link which will be added when it is available online at the AOD). It is written by Chaz Muth of the Catholic News Service and I was unable to find it online elsewhere yet. Noteworthy is that, at the bottom of the article, it says, "the staff of the Michigan Catholic contributed to this story". I'm fairly certain that it was the part I have below about Archbishop Vigneron's disapproval on the issue at Notre Dame.

The statement is embedded in an article about Archbishop Raymond L. Burke's keynote address at the National Catholic Prayer Breakfast in which the head of the Aposotlic Signatura (Vatican's "Supreme Court") took aim at the Notre Dame Scandal.

What is interesting to note, is this paragraph near the beginning of the article which reads (my emphasis in bold):

Shortly after the honor was announced, Detroit Archbishop Allen Vigneron voiced his disapproval. Privately, he addressed aletter to Fr. John Jenkins, CSC, president of Notre Dame, in March. Reminding Fr. Jenkins of the many historic ties between Notre Dame and the Detroit archdiocese, the archbishop expressed both his disappointment and disagreement with the school's decision. Archbishop Vigneron stands in solidarity with the US. Conference of Catholic Bishops on this mater - and the conference has said that politicians who support abortion "should not be given awards, honors, or platforms that would suggest support for their actions." (2004 Catholics in Political Life).

It's unfortunate that it was not made known before now, that Archbishop Vigneron had disapproved and sent a private letter to Fr. Jenkins. People were wondering why there was silence. Thanks be to God that he made his position known (and thanks to the people of the Michigan Catholic for sharing it with us).

This list at Life Site News as of this morning tallied 76 US bishops who disapprove. It appears that Archbishop Vigneron makes 77, the number of US Bishops voicing disapproval of the honor and platform about to be given to President Barack Obama.

For news agencies and others looking for the actual article, watch this Michigan Catholic page for the May 15, 2009 issue for the title I give in my opening paragraph.

UPDATE: The Archdiocese of Detroit has released a statement dated April 29th with the same information. . Perhaps it was some kind of oversight, but this news should have been out sooner and it warranted an article of it's own. I do wish it were displayed prominentely on the AOD's website too. I had to hunt down the tree for it. Regardless, as a Catholic in Detroit, I feel my archbishop has spoken for me.

UPDATE 2: The May 15th articles have been uploaded to the homepage of the Michigan Catholic. Unfortunately, the article I mention is not among those uploaded (perhaps because it is a CNS article which, in it's modified form as noted above, is not available on the web). However, the statement to which I link in the first update above, contains all of the elements right at the AOD website.