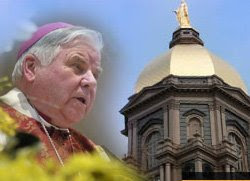 Bishop John M. D'Arcy, the ordinary for the Diocese of Fort Wayne - South Bend, issued a statement today on the invitation extended to President Obama by the University of Notre Dame. The statement, which had been anticipated this morning, appeared on the diocesan website early in the afternoon.

Before I get into the statement, note that I plan on another, more extensive post with reactions from various sources.

Emphasis mine in bold; comments bracketed in red. Links have been added for your convenience.

On Friday, March 21 [!?!?!], Father John Jenkins, CSC, phoned to inform me that President Obama had accepted his invitation to speak to the graduating class at Notre Dame and receive an honorary degree. We spoke shortly before the announcement was made public at the White House press briefing. It was the first time that I had been informed that Notre Dame had issued this invitation. [Wasn't it respectful of Father to notify the bishop of the diocese AFTER the invitation was extended? It's the old "forgiveness vs. permission" thing, but in this case, Fr. Jenkins isn't seeking forgiveness].

President Obama has recently reaffirmed, and has now placed in public policy, his long-stated unwillingness to hold human life as sacred. While claiming to separate politics from science, he has in fact separated science from ethics and has brought the American government, for the first time in history, into supporting direct destruction of innocent human life.

This will be the 25th Notre Dame graduation during my time as bishop. After much prayer, I have decided not to attend the graduation. I wish no disrespect to our president, I pray for him and wish him well. I have always revered the Office of the Presidency. But a bishop must teach the Catholic faith “in season and out of season,” and he teaches not only by his words — but by his actions. [Bravo!]

My decision is not an attack on anyone, but is in defense of the truth about human life. [It's not a negative action, but a positive action, but the dissident Catholic journalists and secularists will spin it negative and call it "political", "right-wing", or "conservative".]

I have in mind also the statement of the U.S. Catholic Bishops in 2004. “The Catholic community and Catholic institutions should not honor those who act in defiance of our fundamental moral principles. They should not be given awards, honors or platforms which would suggest support for their actions.” Indeed, the measure of any Catholic institution is not only what it stands for, but also what it will not stand for.

I have spoken with Professor Mary Ann Glendon, who is to receive the Laetare Medal. I have known her for many years and hold her in high esteem. We are both teachers, but in different ways. I have encouraged her to accept this award and take the opportunity such an award gives her to teach. [It will be interesting to watch what she does. Will she go and use the opportunity to teach? Or, will she too feel the need to boycott?]

Even as I continue to ponder in prayer these events, which many have found shocking, so must Notre Dame. Indeed, as a Catholic University, Notre Dame must ask itself, if by this decision it has chosen prestige over truth. [Excellent! However, it takes a properly formed conscience - one formed in light of Magisterial teachings for the university to even begin a collective examination of conscience.]

Tomorrow, we celebrate as Catholics the moment when our Lord and Savior, Jesus Christ, became a child in the womb of his most holy mother [thank God she said "yes" to life!]. Let us ask Our Lady to intercede for the university named in her honor, that it may recommit itself to the primacy of truth over prestige.

Source: Diocese of Fort Wayne - South Bend (if you are reading this at a later date, you may need to select "past statements" at the top of the page).