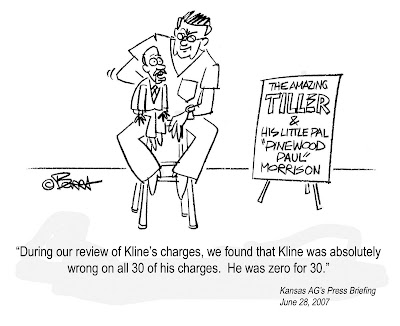 Original cartoon of John Francis Borra, SFO, used with permission.
Please see terms of use at his blog, Veritats: The Cartoon. Below this cartoon he explains:
This cartoon illustrates the deception, slander and manipulation emblematic of Kathleen Sebelius' tenure as Kansas governor. Initially published in July 2007, it depicts then-AG Paul Morrison's press conference, during which he disparaged his predecessor's investigation and subsequent charges against Wichita abortionist George Tiller. Morrison, aided by a one-million-dollar smear campaign funded by George Tiller's PAC, had just unseated Phil Kline as the state's attorney general. Tiller's investment in both Sebelius and Morrison had begun paying dividends.

The perfect storm for the USCCB...

Just when the pro-life movement thought Kathleen Sebelius' close ties with the Butcher of of Kansas, George Tiller, would end her bid as head of Health and Human Services, Obama has gone forward with his selection.

Go read: Obama taps Sebelius for HHS secretary, posted 21 minutes ago as of this entry. Here's the relevant excerpt.

The source, who was not authorized to speak on the record, said Obama will formally announce the nomination on Monday.

Sebelius, 60, was an early Obama supporter. She picked his presidential campaign over that of Hillary Rodham Clinton, now the secretary of state. Sebelius worked tirelessly for Obama's bid and was a top surrogate to women's groups.

Abortion foes strongly oppose Sebelius because she once had a reception attended by a late-term abortion provider who now faces criminal charges. Democrats say there was never any doubt that Obama would appoint an HHS secretary who supports abortion rights.

Go read more about Gov. Sebelius at the blog of John Francis Borra, who is from Kansas, her home state (scroll).

Go read more about George Tiller, who performs abortions at any point of pregnancy.