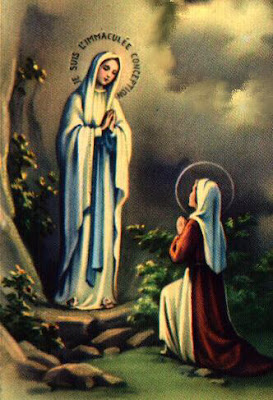 In today's Pastor's Descant, Fr. Perrone talked about the need for us to be aware of our gestures during holy Mass. He specifically targeted how we approach for Communion. I couldn't help but think about what I had just read last night in Saint Bernadette Soubirous 1844-1879 by Abbe Francois Trochu

Bernadette, following the first apparition, described Our Lady's hands as the Rosary was prayed. The author says that among the many details that came out during questioning, was the manner in which Mary held her hands:

"..... Her hands, when she kept them joined, where pressed together along their whole length, palm to palm...."

In any painting you see of Our Lady of Lourdes, you see this posture. And, it is appropriate to recall as we read Fr. Perrone's words for our own personal reflection. We can't change what others are doing or not doing, but we ought to be conscious of what we are doing when in prayer, in Church, or at Mass. Our Lady, among other roles, is a profound teacher. Perhaps we ought to follow her lead.

Without further delay, here is the March 4, 2007 Pastor's Descant:

"You’ve all seen those disembodied hands joined in prayer, etched so masterfully by Albrecht Dürer. They adorn greeting cards, advertisements and brochures, but were surely intended for the more noble purpose of representing Christian piety. Those hands returned to my imagination in writing today on a topic, seemingly but a trifle, that should concern everyone. This is the little-regarded subject of folding one’s hands in prayer. Now, why should I write about a thing of such relative insignificance? I hear you thinking: ‘has he nothing better to say?’ It’s because little things sometimes can make a big difference and because this subject came up in a recent adult catechism class that I’m taking it up here today.

It was pointed out to me that some of our Grotto people wend their way to and fro the Communion line with arms adangling, which is to say, with hands unfolded. Truth to tell, I had never noticed. (In fact, let it be known that I make it my business not to look much at the congregation lest I lose track of what I’m doing before God.) In this matter I’m reminded of the immense loss for the Church of the teaching Sisters. They were the ones who taught and who exemplified Catholic decorum. With their disappearance from the scene in nearly every parish, we have either forgotten or had never learned how to conduct ourselves reverently in church.

No doubt, you will have noticed that I require our altar boys to keep their hands joined at the breast and pointing upward when serving Mass. There’s more reason for this than merely the edification of the faithful, although that’s an important thing. I can’t adequately explain why, but the folding–or not–of the hands has a great deal to do with the way our minds pray. If you look at the representation of angels in our church–and elsewhere in art–you will see their hands joined in prayer. Likewise the Virgin Mary. To my mind, this discipline of the hands has the effect of helping to concentrate, to focus one’s thoughts more securely on God. It’s a posture we don’t employ for anything else except prayer. Hence, like kneeling, it’s an act of the recognition of God. You can swing your arms freely about wherever you may be, but you should not in church, and especially at Communion time, because you know you are in the august presence of the Most High.

Should you think I am making too much of this, I will let our Holy Father Pope Benedict have a word. In his important and highly influential book, Spirit of the Liturgy, after recalling Saint Paul’s admission, “I train my body and subdue it” (1 Cor 9:27), the Pope says that the body needs to be trained, so to speak, for the resurrection it is meant to share. “The body has a place within the divine worship of the Word made flesh, and it is expressed liturgically in a certain discipline of the body, in gestures that have developed out of the liturgy’s inner demands...” Then, recalling that the practice of joining hands in prayer came out of the custom in feudal times of placing one’s joined hands into the hands of his ruling lord as an expression of loyalty and fidelity, the Holy Father concludes that when we fold our hands in prayer we symbolically place our hands in God’s, pledging to Him our fidelity.

Getting to my point, I’d like those hitherto ‘unyoked’ in their Communion habits to give due consideration both to the impression their nonchalant mannerism may have to onlookers and to how its correction might contribute to an improved mental disposition after receiving the holy Sacrament. Speaking for myself, I find it hard, without summoning the body’s cooperation, to concentrate in prayer. Joining my hands seems to help arrest the powers of my mind, feeble though they may be, and fixing them more pointedly on God.

There are many things of a like kind in our liturgical comportment that I might single out for ‘airing,’ such as the bowing of the head at the name of Jesus or Mary, the closing of one’s eyes at the moment of receiving Communion, and–here’s another
thing to rail against–the slipshod way we dust ourselves with the sign of the cross. But these are more for another time when my zeal might be roused to suggest other ways better to use our bodily powers to assist in our prayer. “Glorify God,” wrote the Apostle, “in your body.” (1 Cor. 6:20)." 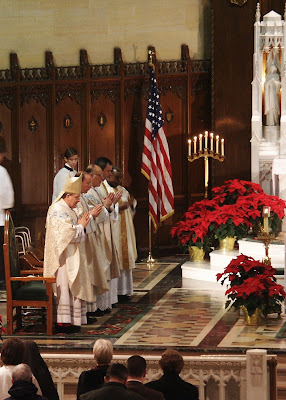 I do hope Fr. Perrone will continue with this kind of catechesis for those of us who were busy tending to our fingerpaintings while our folks thought we were learning about the faith.

As for the book mentioned, I highly recommend it. There are many historical pictures in the book, and it is just a good read. It obviously goes much more deeper than any movie. I'm actually reading many books right now, but I only read a few pages of one of them each day.
Posted by Diane Korzeniewski at 6:51 PM