Exhortation on the Eucharist coming March 13, 2007

CWNews is reporting that the Exhortation based on the Eucharistic Synod is forthcoming next Tuesday. Here's more:

Papal document on Eucharist due March 13

Vatican, Mar. 6, 2007 (CWNews.com) - Pope Benedict’s apostolic exhortation on the Eucharist will be released on Tuesday, March 13, the Vatican has announced.

The new papal document, entitled Sacramentum Caritatis, summarizes and concludes the deliberations of the Synod of Bishops, which met in October 2005 to discuss the Eucharist.

The apostolic exhortation will be introduced to the press at a briefing hosted by Cardinal Angelo Scola of Venice, who was the relator general for the Synod assembly; and Archbishop Nikola Eterovic, the secretary-general of the Synod of Bishops.

The Synod of Bishops met in October 2005 to discuss the theme, “The Eucharist: Living Bread for Peace in the World,” with 256 bishops from 118 countries participating in the discussions. In a break from the usual practice, the Synod fathers made public an “unofficial” list of the 50 propositions approved at the conclusion of their deliberations. Ordinarily the propositions remain confidential, to be used by the Pope in preparing an apostolic exhortation on the topic of the Synod's deliberations. But Pope Benedict approved the public release of the conclusions from this assembly.

During a February 22 meeting with priests in Rome, Pope Benedict had said that the release of his apostolic exhortation was imminent.

CWNews goes on to think outloud what the rest of us are thinking about:

Some Vatican sources have suggested that the unveiling of the apostolic exhortation could clear the way for another long-awaited papal document: a motu proprio allowing wider use of the pre-conciliar liturgy. In announcing the release of Sacramentum Caritatis, the Vatican press office made no mention of that other document

Also, Envoy Magazine Online has just released an article by Brian Merhson in which he brings forth some discussion from Monsignor Michael R. Schmitz, U.S. Provincial Superior for the Institute of Christ the King, Sovereign Priest.

Here are some excerpts with a link to the full article below:

There have been some subtle signs that these two specific encouragements — offering Mass ad orientem and using a Latin canon and Gregorian chant during the ordinaries of the Novus Ordo liturgy — may indeed be part of the post-Synod on the Eucharist document, expected to be promulgated soon.

This too was quite interesting on the subject of Archbishop Piero Marini - the MC behind the papal Masses of the last half of Pope John Paul II's pontificate, and the beginning of Pope Benedict's:

Another notable newsworthy item that Msgr. Schmitz delivered at his February 19, hour-long presentation during the question-and-answer period was that Archbishop Piero Marini, whom many had speculated would have been removed long ago, has finally accepted another assignment.

“The Pope is before all else, a gentleman,” Msgr. Schmitz said, clarifying for many Catholics in the room why this particular step has taken as long as it has. Vaticanists have expected this move ever since the beginning of Pope Benedict’s pontificate. Msgr. Schmitz did not give any details as to the nature of Archbishop Marini’s new assignment.

The entire article at Envoy is well worth reading:

Traditional Liturgy Not Affected by “the Reform of the Reform”


Something else going around the blogosphere are some photos from Redemptoris Mater Chapel in Rome where the altar position has been changed in a way that appears more compatible with the ad orientem posture. Go to the New Liturgical Movement to read:

Redemptoris Mater Chapel; a barometer of the liturgical shift? 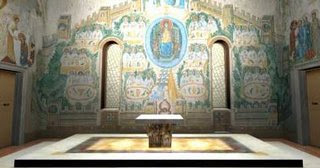 Altar in Redemptoris Mater Chapel BEFORE 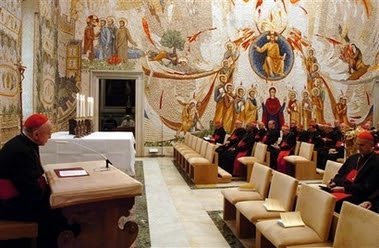 Altar in Redemptoris Mater Chapel AFTER
Fr. Zuhlsdorf comments on a related subject [emphasis mine]:

Today I was strolling and found the Church S. Maria della Pace open. "Miracolo!", quoth I and entered. It is a gem. Standing before the church’s main altar I saw a picnic table pushed to the side of the sanctuary. What really got my attention, however, were a couple of young people looking at the sanctuary and talking about how beautiful it was. I heard one say, "Imagine, for Mass they put that nasty table (tavolaccia) in front of that!" They were all properly disgusted with the idea. The moral of the story? What the aging hippies think they need to do to engage "the people", "the people" don’t want. And today younger people, who are not hauling around the baggage of the ‘60’s don’t want what the hep-cats have pushed on us for years.

But times are changing rapidly. I think we will see more and more younger priests ridding their churches of iron-boards and re-orienting the Mass once again. We are getting constant hints that this is path of the future. I am guessing the Holy Father might even talk more about this in a document.

We will be watching the many blogs and newscolumns closely in the next few weeks. Here is one more to digest:

It is the Holy Father that Will Decide - a Catholic Exchange article by Anthony Valle, which includes a recent interview with Archbishop Malcom Ranjith of the Congregation for Divine Worship (Cardinal Arinze's right-hand man)