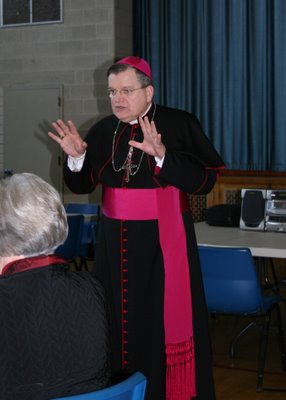 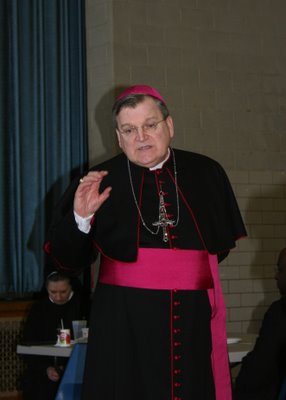 We continue with Archbishop Raymond L. Burke's visit, in which he joined those in attendance for a brown-bag lunch in the school gym. After he ate, the Archbishop played a new video about the Shrine of Our Lady of Guadalupe in LaCrosse, Wisconsin - his former diocese. I am attempting to get a copy of this video, but if someone should find they have uploaded it to YouTube or elsewhere, please email me at TeDeumBlog@aol.com

This shrine is being built with the blessings of Rome and in cooperation with the Ordinary responsible for the original shrine of Our Lady of Guadalupe in Mexico City.

The shrine's mission is as follows:

On August 4, 2006 Archbishop Burke publicly announced that the Shrine will be dedicated on July 31, 2008. You can see a chronological timeline here.

At the Shrine's website there are many homilies by Archbishop Burke - founder. You can also support the shrine through purchases made at their Online Giftshop.

The Father John A. Hardon Connection

From the What's New page at RealPresence.Org (scroll down):

In 1999, a year before his death, Father John A. Hardon, S.J. visited Most Reverend Raymond L. Burke (then Bishop of La Crosse Diocese) and approved of the Bishop's plan to build a Marian Catechetical Center at the Shrine complex. After Father Hardon's death, Archbishop Burke (St. Louis Diocese) assumed the spiritual directorship of the Father Hardon apostolates of which The Real Presence Association is one and proceeded directly to fulfill his commitment to Father Hardon.
The Marian Catechetical Center will consist of a variety of resources for the study of catechetics, classrooms for instruction in spirituality and doctrine, and facilities for Catholic radio broadcasting. A library, dedicated to the memory of Father Hardon, will contain many of his treasured materials. The Shrine has already received some of his clothing and prayer materials. Other personal library possessions of Father Hardon are intended to be transferred to the Shrine once proper facilities can be constructed. To receive and preserve the original writings of Father Hardon, the Catechetical Center will have a museum-quality archiving room on site.

Time is of the essence in constructing the Catechetical Center. Of primary importance is the need for a center to fully engage the evangelization resources available through the Marian Catechist Apostolate; of equal concern is the degree of risk associated with so many of Father Hardon's works – currently spread across a variety of locations and not yet secured in an environment of preservation.

The Capital Campaign is underway and an estimated $5M is needed for the construction of the Center. Those who benefit from the works of the Father Hardon Apostolates are particularly requested to come forward to assist Archbishop Raymond L. Burke in this worthy endeavor. No amount is considered too small.

Consider donating to this most worthy cause. As previously mentioned, considerations are underway for the cause of sainthood of Fr. John A. Hardon, S.J., who spent his finally years at Assumption Grotto parish where many benefitted from his spiritual direction, his prayers, and zeal that made the Energizer Bunny look slow. If you would like to discuss your donation, call the Executive Director, Sister Christa Marie at 608-788-8601. Sister is a member of the Sisters of St. Francis of the Martyr St. George - provincial house is located in Alton, Illinois. (Hmmm.....these nuns don't seem to have a shortage of vocations either.) 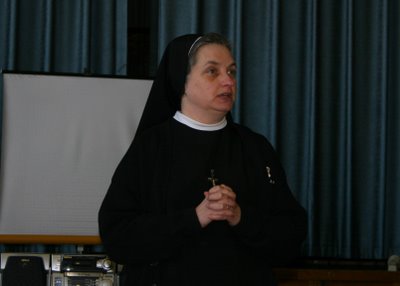 Posted by Diane Korzeniewski at 6:42 AM